The evening of Friday 23 April saw the first Society sale to take place at Clogher, previously it was held at Dungannon. A steady trade took place over the course of the evening, with 15 bulls sold, an average price of £3,241, and a whopping 79% clearance. 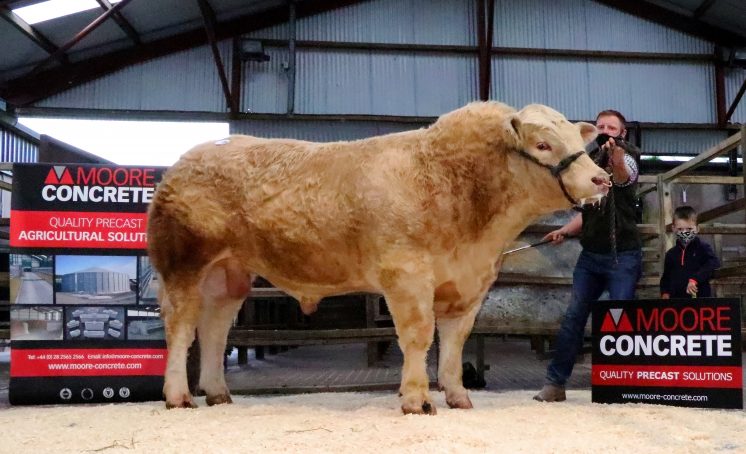 The 20-month-old BROWNHILL PADDYRABBIT had the honour of reaching the highest price of the day, maxing out at 4,500gns. Paddyrabbit is from the Devine Brothers herd in Strabane, Co. Tyrone and was born to Brownhill Ella, a daughter of Shaen Topper. His sire is Mullaghbane Topline, a son of the highly regarded Doonally New. Paddyrabbit has quite the legacy to live up to, as Doonally New was known for his impressive gestation length and beef yield EBVs. His great potential caught the eye of Mr T Whileside, and he will be making his way to his new home in Greysteel, Co. Londonderry. 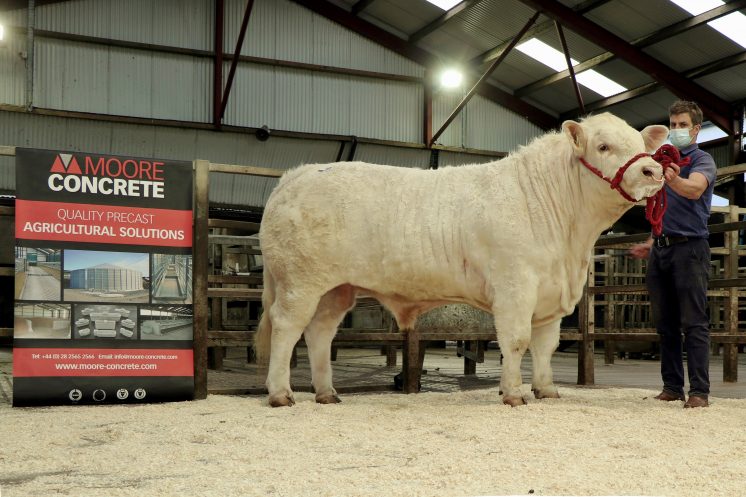 The second-highest price of the day, at 4,200gns, was secured by MAGHERAGART PINNACLE, an attractive 19-month-old from the herd of Mr J Donnelly of Dromore, Co. Tyrone. Pinnacle has several high sellers in his lineage: his sire is the 22,000gns Newhouse Bigal, and his dam, Mountjoy Infanta, is a daughter of the 30,000gns Balmyle Bollinger. The lucky new owner of Pinnacle is F Smyth, who will be introducing him to their herd in Omagh, Co. Tyrone. 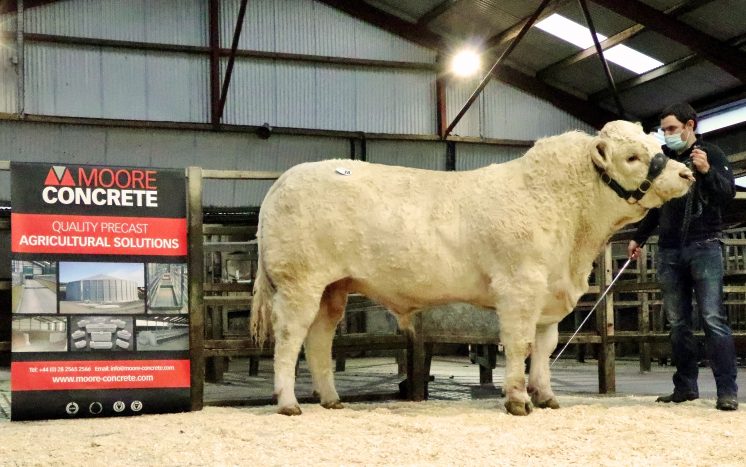 Two lots reached the third-highest price of 3,800gns. The first was the 16-month-old MOORLOUGH PICADOR, bred by Mr J McBride of Strabane, Co. Tyrone. Picador’s twin brother, MOORLOUGH PARKER also sold, for a price of 2,600gns. The twins’ sire, Clyth Diplomat, was the Junior Champion at Stirling in 2009, and sold for 16,000gns. Their dam is Moorlough Heighlight, a daughter of the tremendously successful Thrunton Voldemort. The brothers are sure to make their new owners very happy once they’ve settled into their new homes. Picador will be going home to Tirgarve, Co. Armagh, with Mr A Sloane, while Parker will be heading back with Mr S McAleer to their farm in Pomeroy, Co. Tyrone. 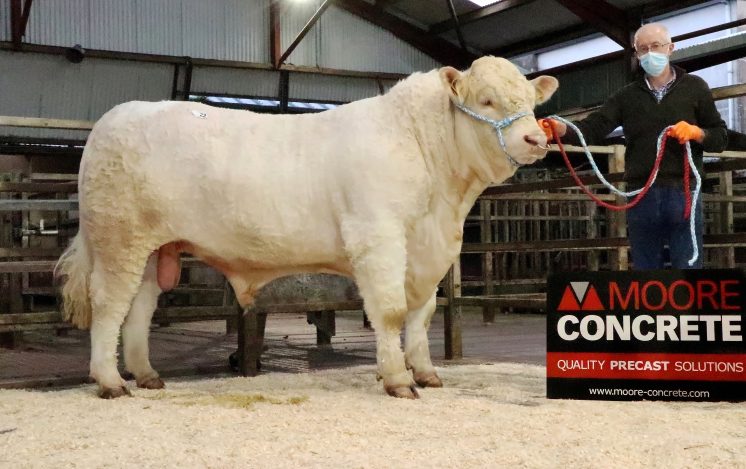 Also selling for 3,800gns was BROGHER PRINTER, from the herd of Mr T Phair of Enniskillen, Co. Fermanagh. Printer has inherited some of the best traits of his predecessors, boasting a good calving ease EBV from his sire, Blelack Fabulous, and fantastic growth rates from his dam, Brogher Josephine – a daughter of the ever-popular Blelack Digger. This promising young bull attracted the attention of Mr C Maxwell, who will be taking him back to his farm in Clough, Downpatrick, Co. Down. 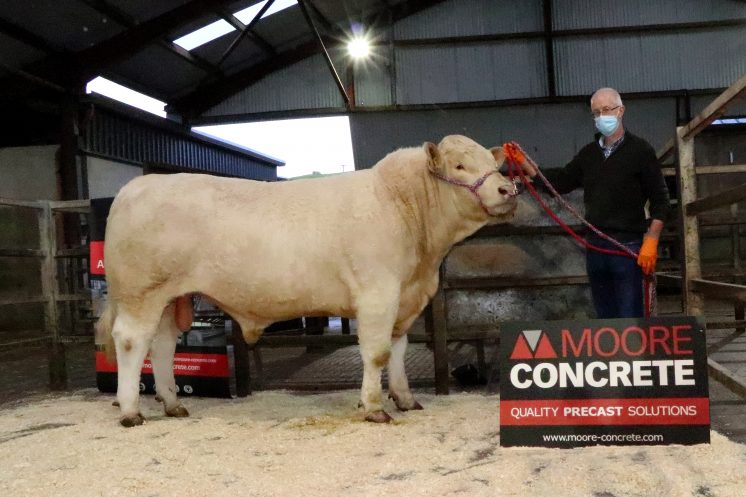 Another bull from Mr T Phair’s herd, BROGHER PRESIDENT, secured the next highest bid of 3,600gns. This 17-month-old was born to Brogher Emmy, a daughter of Sang-D’or, and was sired by the 11,000gns Woodpark Elgin, a son of the 19,000gns Corrie Alan. President will be making his way to Newtownstewart, Co. Tyrone, to the farm of S & R Millar. 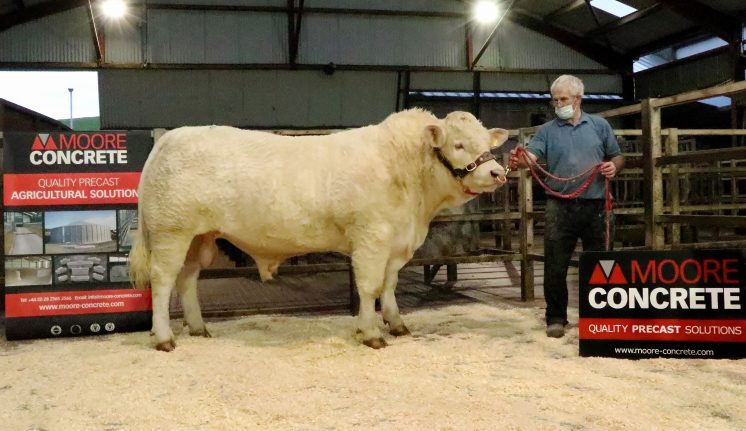 Coming in at the next highest price of 3,400gns was DRUMCONNIS RELENTLESS. This promising 13-month-old comes from the herd of Mr J McGrath of Omagh, Co. Tyrone, and boasts a phenomenal calving ease EBV of +20.5%, placing him in the top 1% for this trait. Relentless was sired by the French bull First, who is well known for his exceptional calving ease. His dam is the easy-calving Fairway Happydawn, another daughter of Blelack Digger. He is sure to integrate well into his new herd in Cookstown, Co. Tyrone, courtesy of winning bidder Mr P Parke. 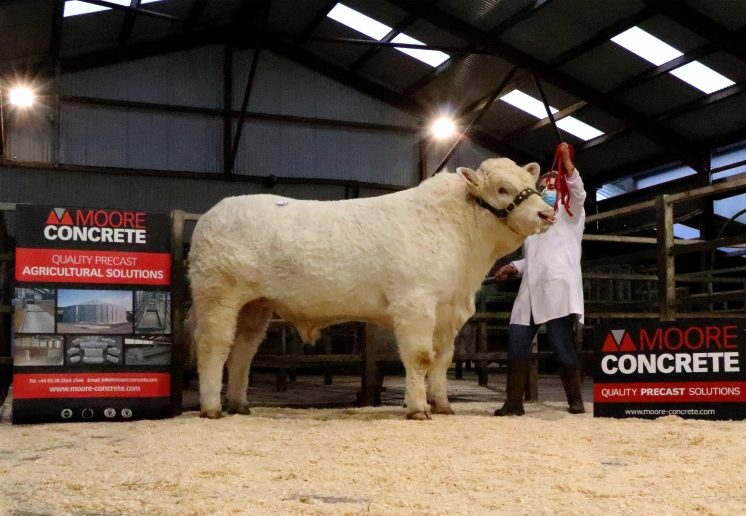 Also possessing a good calving ease EBV, and reaching a price of 3,200gns, was RATOARY REDBULL. A local bull, Redbull comes from the herd of Mr S McGovern of Clogher, Co. Tyrone. He was born to Knockshe Irine, a daughter of Mogador, and sired by the Supreme Champion at Balmoral in 2016, Stranagone Jones – another of Blelack Digger’s numerous offspring. This handsome 15-month-old will be welcomed to his new home in Fivemiletown, Co. Tyrone with buyer J Jackson.

Selling for 2,800gns was one of the older bulls forward for sale: the 21-month-old KILLADEAS PADDY. Paddy was bred by S & D Bothwell of Ballina Mallard, Co. Fermanagh, and was sired by the 11,000gns Battleford Laser and out of the easy-calving Killadeas Irene, another daughter of Blelack Digger. He caught the eye of A & R Wauchob, who will be taking him back to Newtownstewart, Co. Tyrone.

Minutes earlier, the first sale of the day was secured by ROYALDOWNS PRESIDENT at 2,700gns. This handsome fellow was born in April 2019 to Royaldowns Gigi, a daughter of Maerdy Impeccable, and sired by the easy-calving Fiston. President originates from the well-established herd of M McKeown Esq. of Downpatrick, Co. Down, and will also be heading back to Newtownstewart with A & R Wauchob.

14-month-old CRUMMER RANGER managed to fetch a sum of 2,600gns for his breeder, Mr A Dunne of Enniskillen, Co. Fermanagh. Ranger was sired by the easy-calving Whitecliffe James, a son of Blelack Digger, and his dam is Tannaghmore Nova, a daughter of the 8,000gns Blelack Blackberet. This handsome young bull caught the attention of Mr E Lindsay, and he will soon be settling into his new home at Florencecourt, Enniskillen.

Two bulls sold for a final price of 2,500gns, the first being WOODPARK PLATINUM. The 17-month-old bull was bred by Mr W Short of Omagh, Co. Tyrone, and was born to Maerdy Inbred, a daughter of Froufrours. Like the previously mentioned Brogher President, Platinum was also sired by the 11,000gns Woodpark Elgin. He will be heading back to Lisnaskea, Co. Fermanagh with Mr K Little.

Also coming in at 2,500gns was MONIENDOGUE ROBERT, from the herd of Mr J Maguire of Belleek, Co. Fermanagh. Robert was the youngest bull forward for sale over the course of the evening, at only 13 months old. Sired by the 13,000gns Conval Frank and out of Deerfin Tina, another daughter of Doonally New, Robert is certain to fit in well with his new herd in Ballinamallard, Co. Fermanagh, under the care of Mr C Morrow.