At long last it was time to dust off the rosettes as the traditional pre-sale show could once again take place at the annual Spring sale at Borderway Mart, Carlisle. The show, judged by Mr Alistair Smith of Northampton, took place on Friday May 14, and highlighted the stunning animals on offer.

Proceedings began in earnest on Saturday May 15, attracting a flurry of bids across all stock. A total of 49 bulls sold, with an average price of £7142.14 and a phenomenal 87.5% clearance. In addition, a further 14 heifers went under the hammer for an average price of £3570. 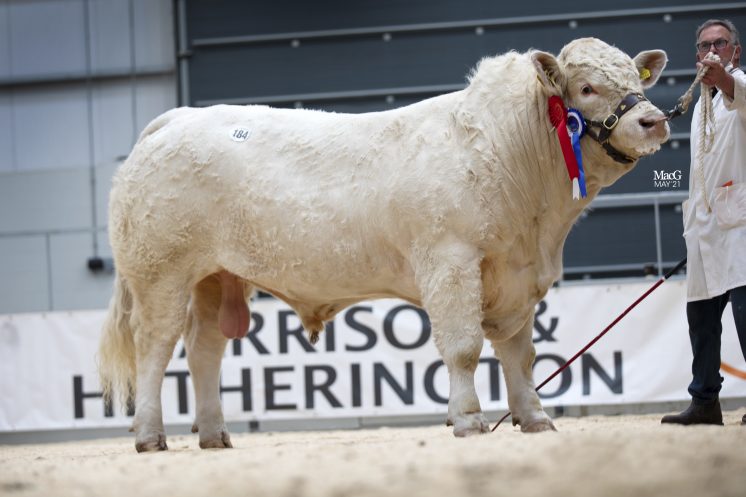 The top price of the day, at a whopping 20,000gns, was secured by Reserve Supreme Champion & Reserve Intermediate Champion GRETNAHOUSE POUNCER. Pouncer is from the herd of the well-respected Mr A G Houston of Kirkpatrick-Fleming, Dumfriesshire, and was sired by the easy-calving Westcarse Jimmy. Pouncer has also inherited his sire’s excellent growth EBVs, placing him in the top 1% for 200-, 400-, and 600-day weight values. Pouncer’s dam, Gretnahouse Japan, is a daughter of the 17,000gns Balthayock Gladiator. The great potential of this 18-month-old was noticed by winning bidder Mr H Heron, who will be taking Pouncer back to Newtonards, Co. Down. 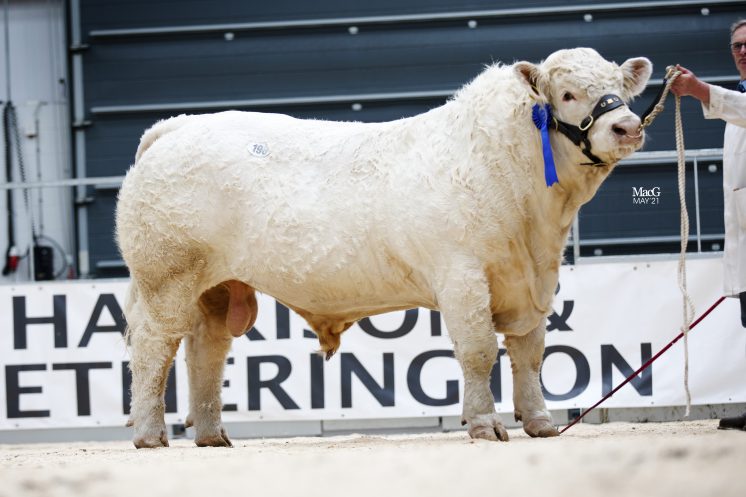 Minutes later, the hammer came down at 16,000gns for another bull from Mr Houston’s herd – this time for the 18-month-old GRETNAHOUSE PIMP. Pimp is another cracking young bull sired by Westcarse Jimmy, and once again Jimmy’s influence is clear in Pimp’s impressive growth and calving ease EBVs. Pimp was born to Gretnahouse Jannabel, a daughter of the notoriously easy-calving Blelack Digger, which undoubtedly only adds to his appeal. The young lad caught the eye of both Mr J Wardlaw and Son, Balerno, Midlothian and David Dandie Broxburn, Westlothian who will share the bull. 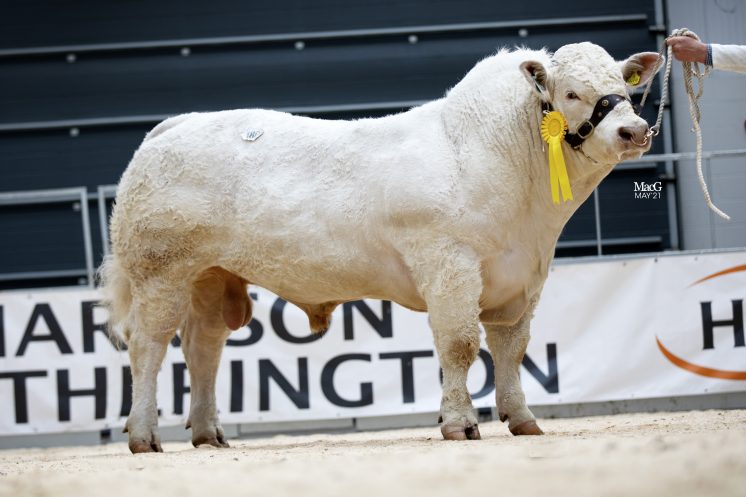 The third-highest price of the day went to ANNANVIEW PRINCE, reaching a final bid of 15,000gns. Prince was bred by K Watret of Annan, Dumfriesshire, and is out of Gretnahouse Megan, an easy-calving daughter of the 12,000gns Wesley Equinox. Prince’s sire, Harestone Hercules, offers superb growth EBVs, only adding to the promise this young bull holds. P & C Tippetts were the winning bidders, and will be taking Prince home to Shifnal, Shropshire. 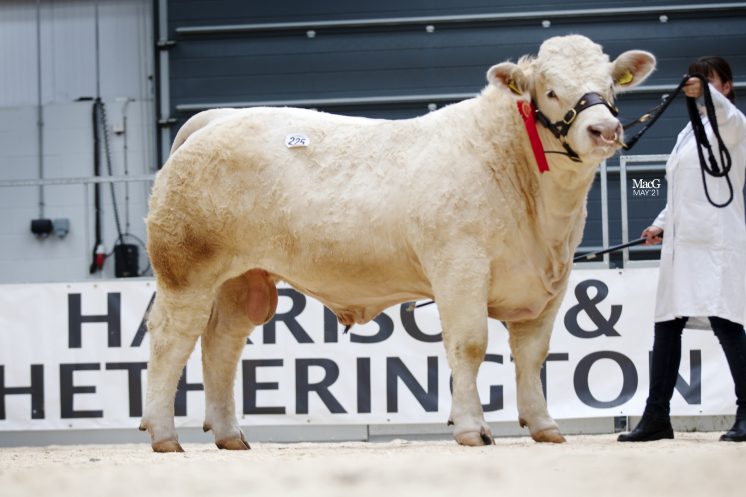 First-in-class CAYLERS ROCKY achieved the next highest price of 14,000gns. Rocky, along with several other bulls from the Caylers Charolais herd, made the long trip all the way from Nuthampstead, Hertfordshire to be sold at Carlisle. He was born in January 2020 to Caylers Glamour, a daughter of Thrunton Dominator, and sired by the 2020 Great Charolais Summer Show Supreme Champion Rosanna Jupiter. Rocky will be making the considerably shorter journey to Ruthwell, Dumfriesshire, where he will be integrated into the herd of Mr H Goldie. 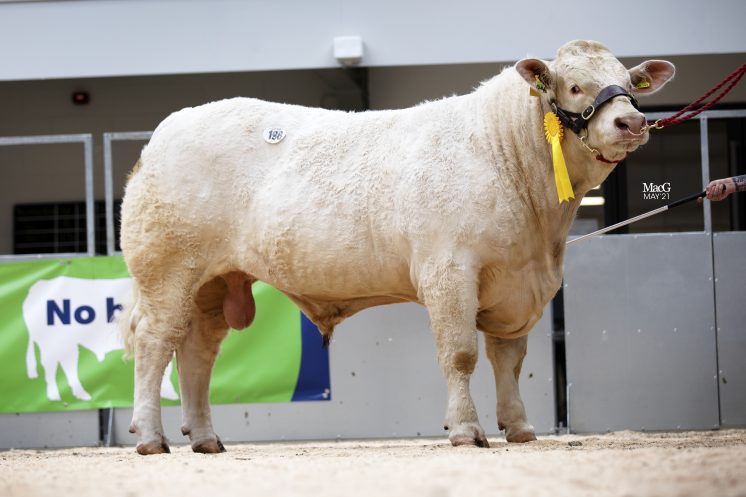 Three bulls managed to reach a top price of 13,000gns – the first of which was BALMYLE PRESIDENT, bred by W P Bruce of Meigle, Perthshire. This 18-month-old is out of Balmyle Lucky, a daughter of Maerdy Egret, and sired by 2015 Carlisle Reserve Junior Champion Balmyle Jasper. President will be heading back to Berwick-Upon-Tweed, Northumberland, courtesy of winning bidder Armstrong Farming Ltd. 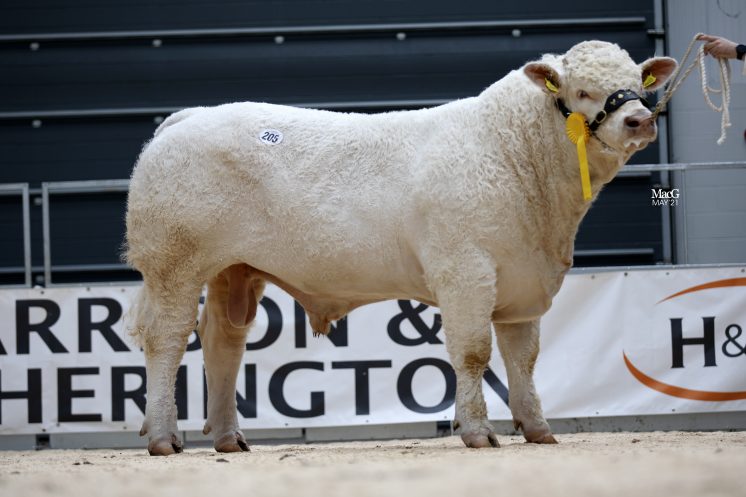 Next to reach 13,000gns was 17-month-old RAVENSWORTH PROMETHEUS, from the herd of Mr W S Oates in Gateshead, Tyne and Wear. Prometheus was sired by the highly sought-after Dingle Hofmeister, and his dam is Ravensworth Juniper, a daughter of Thrunton Florida. This charming young bull was snapped up by J C Hobday & Son, who will be taking him back to Hawick, Roxburghshire. 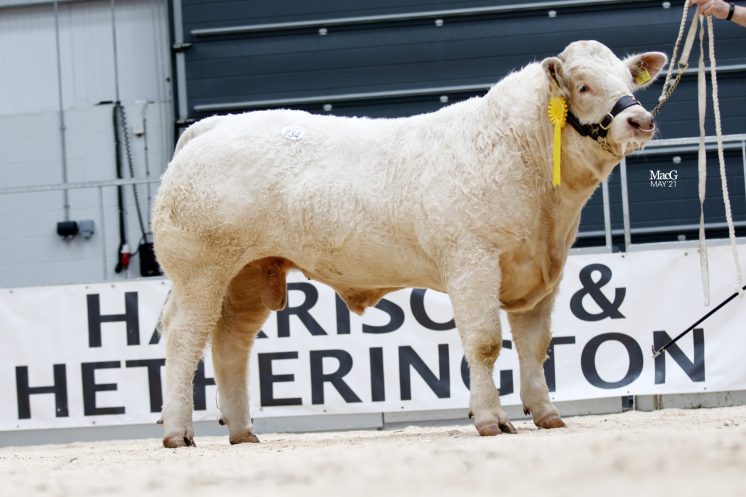 The final bull to secure a bid of 13,000gns was MORNITY RUGBY, a 14-month-old from the herd of Jack Nicoll Farms in Blairgowrie, Perthshire. Rugby is a heifer’s calf, being born to Mornity Nikita, a daughter of the award-winning Maerdy Hwre. He was sired by the popular easy-calver Westcarse Houdini, who fetched a price of 14,000gns at Carlisle in 2013. Rugby boasts notable growth EBVs, and is sure to produce valuable calves for his new owner, M A J Jarrold of Cosheston, Pembrokeshire. 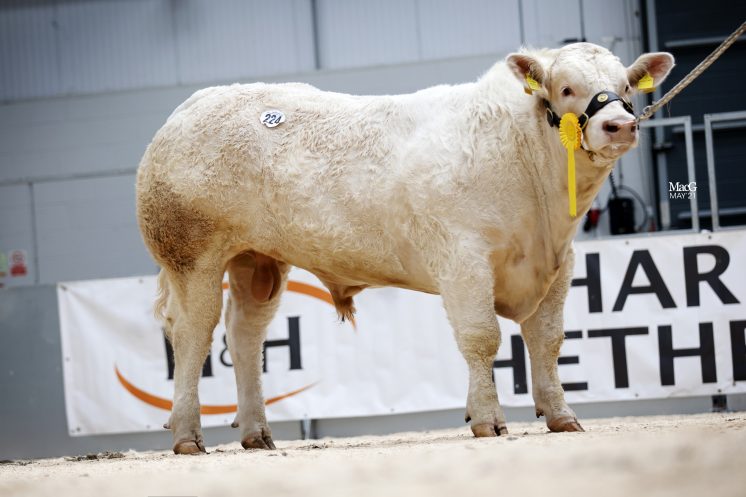 The hammer came down at the next highest price of 12,000gns for two bulls, the first being 16-month-old RETTIES ROGUE. Rogue comes from the herd of R & C Rettie of Perth, Perthshire, and is another bull sired by the 14,000gns Westcarse Houdini. His dam is Retties Nena, who was sired by the ever-popular Blelack Digger. Offering a calving ease EBV of +7.7, Rogue has plenty of potential to pass on to his future progeny. Shennanton Livestock were the winning bidders for this stylish bull, and he will soon be settling into their herd in Newton Stewart, Wigtownshire. 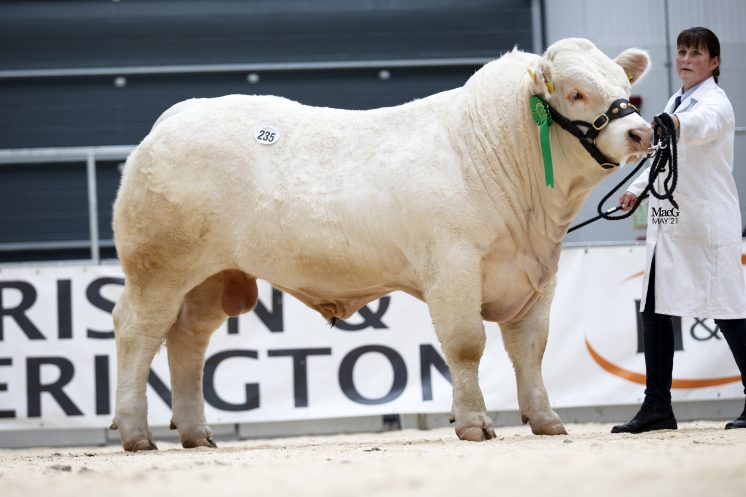 Next to secure a bid of 12,000gns was another offering from Caylers Charolais: CAYLERS RAMBO. This easy-calving 14-month-old was also sired by the award-winning Rosanna Jupiter, and was born to Caylers Heidi, a daughter of the 10,000gns Thrunton Alpha. Rambo offers consistently above-average growth EBVs in addition to his superb calving ease of +11.7, and is sure to settle in well at his new home in Blackmill, Bridgend with new owner Williams Partners. 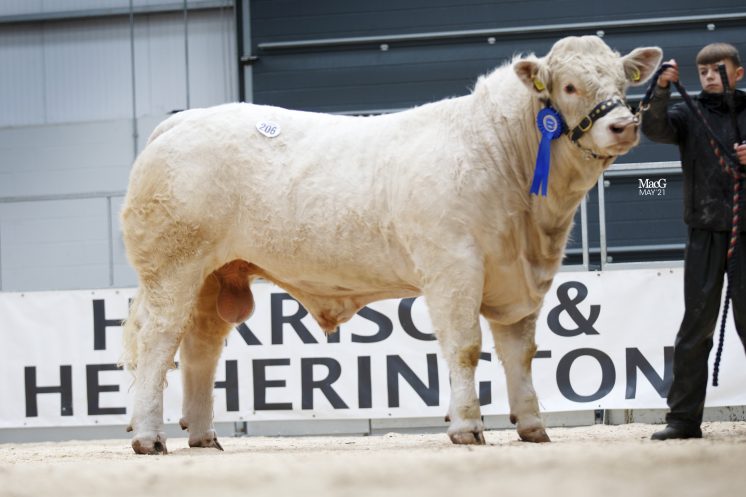 Another two bulls sold for the next highest price of 10,000gns, the first of which was ELGIN PANDY. Pandy was bred by Mr R A Milne of Elgin, Morayshire, and was sired by the easy-calving Carwood Lochness. His dam is Elgin Mary, who is a daughter of popular sire Westcarse Houdini. This attractive November-born bull caught the eye of winning bidders A & E Shand, and he will be heading back to their herd in Ellon, Aberdeenshire. 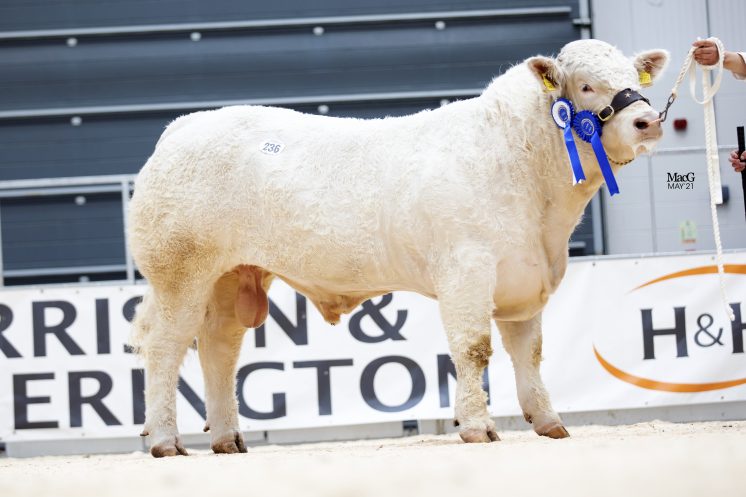 The final bull to reach a five-figure bid was Reserve Junior Champion MORNITY ROMEO, another from the herd of Jack Nicoll Farms. A half-brother to the 13,000gns Mornity Rugby, Romeo was also sired by Westcarse Houdini. His dam is Mornity Matilda, a daughter of Baggrave Lysander. Like his brother, Romeo will also be heading back to Wales, this time to the herd of D J & M D Prosser & Jones in Brecon, Powys.

The next highest price of 8,000gns was secured by first-in-class ELGIN PROSPECT, another bull from Mr R A Milne’s herd. This 17-month-old is out of Elgin Mabel – another daughter of Westcarse Houdini – and sired by the easy-calving Caylers Noah. The excellent calving ease and growth EBVs from his lineage are evident in Prospect, and he is sure to settle in nicely to his new home in Lockerbie, Dumfriesshire, under the care of A J Macgregor.

Four bulls went under the hammer for a final price of 7,000gns, two of which were half-brothers from the herd of I & D Goldie of Annan, Dumfriesshire. The first of this pair to sell was SOLWAYFIRTH PRESLEY, a strapping 19-month-old sired by Glenericht Majestic and out of Solwayfirth Misty, a daughter of Solwayfirth Javelin. Majestic is known for producing well-performing progeny, having bred sons to 14,000gns in the past. Presley caught the eye of J Wight & Sons, and will be making the journey back to Biggar, Lanarkshire.

Just moments later, the hammer came down again at 7,000gns for Presley’s half-brother, SOLWAYFIRTH PIONEER. From the same herd, and also sired by the 11,500gns Glenericht Majestic, this October-born bull is instead out of Solwayfirth Donna, a daughter of Maerdy Restful. The winning bid this time came from J & I H McFadzean, who will be taking Pioneer back with them to Newton Stewart, Wigtownshire. 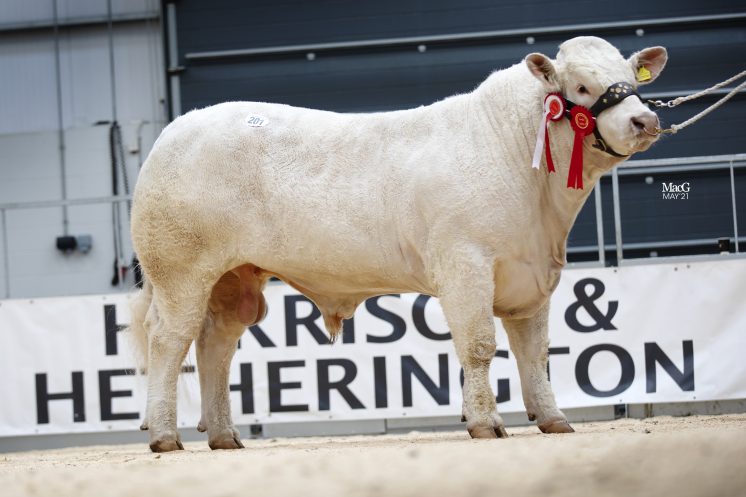 Next to reach a bid of 7,000gns was the weekend’s Supreme Champion & Intermediate Champion, FORMAKIN PRESTIGE. This charming 18-month-old was bred by the McMurrich Partnership of Causewayhead, Stirlingshire, and was sired by the popular French AI bull Jingle. Prestige was born to a daughter of Blelack Digger, Formakin Ladybird, and continues Digger’s legacy of good calving ease EBVs. The winning bid came from W Kingaby, and Prestige will soon be settling into his new home in Fraserburgh, Aberdeenshire. 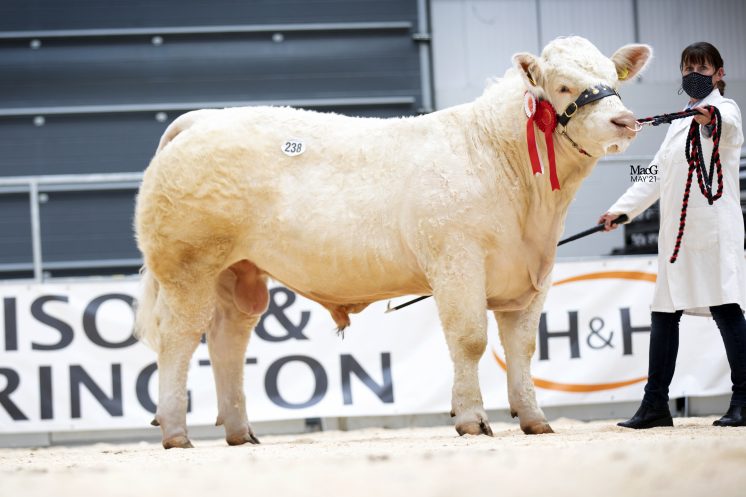 The final bull to reach 7,000gns was Junior Champion CAYLERS RIO, another from popular breeders Caylers Charolais. At only 13 months old, Rio was the youngest bull forward for sale, however his stylish presentation still managed to catch the eye of judge Alistair Smith and bidders alike. Rio was sired by the well-growing Elgin Nailer, and is out of Caylers Holly, a daughter of Thrunton Dominator. Taking this young Champion home are C & E McCombie of Huntly, Aberdeen.

There was also a good demand for Charolais females over the course of the day, with prices reaching a high of 6,000gns. Two draft sales took place, including a draft of 7 heifers from the Harestone herd, and a draft of 5 heifers from the Bassett herd. 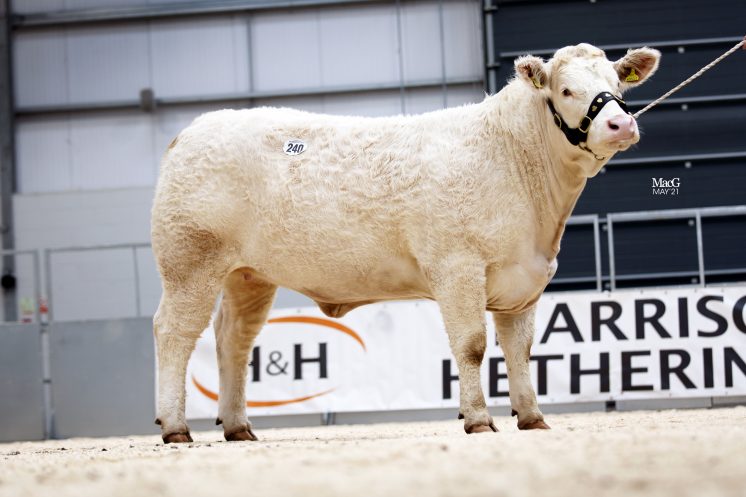 The highest-priced non-draft female was first-in-class BASSETT POLLY at 4,000gns. Polly was bred by Miss J Atkinson and sold by Brailes Livestock of Moreton-in-Marsh, Gloucestershire. Polly was sired by Whitecliffe Lacroix, a son of the 31,000gns Whitecliffe Highlight, and her dam is Bassett Margaret, a daughter of Bassett Inspector. At the time of the sale, Polly had recently been AI’d to the highly sought-after Wesley Equinox. The winning bid went to I N & A N Hollinshead, who will be taking Polly home to Goostrey, Cheshire. 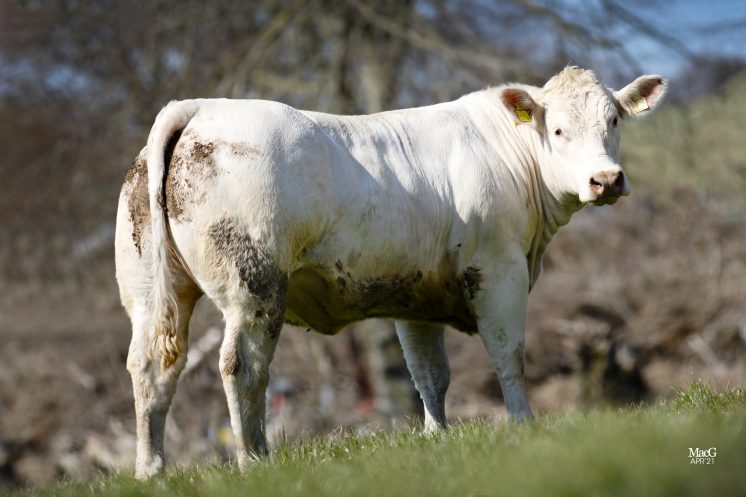 The larger of the two draft sales included heifers from the Harestone herd of R & N Barclay in Insch, Aberdeenshire. The highest-priced heifer in this draft was HARESTONE PASADENA, at 6,000gns. Pasadena comes from a noteworthy lineage, being sired by the 46,000gns 2018 Supreme Champion Balthayock Minstrel, and out of Harestone Lively – a daughter of the 11,000gns Allanfauld Gambler. At the time of the sale, Pasadena was scanned and found to be 8 weeks in calf to Harestone Oscar. Pasadena will be making the long journey all the way to Truro, Cornwall, where she will be introduced to the herd of J Gregory.

The other draft sale of the day was from the Bassett herd of Miss J Atkinson in Malton, North Yorkshire. Five heifers were offered in this draft, reaching a top price of 2,500gns for 22-month-old BASSETT PIPPIN. Pippin, like all of the Bassett heifers forward during the day, was sired by Whitecliffe Lacroix. Her dam is Bassett Edna, a daughter of Oldstone Egbert who has long been a very popular AI bull. Pippin will be making her way to the herd of R J Stott in Carlisle, Cumbria.