There’s no phantom about this top price – BALLINLARE PHANTOM peaked at 16,000gns

Sunday 28th February saw United Auctions host their annual Spring Bull sale where Charolais, once again, came out on top.  With current Government Guidelines still in place there was a good mixture of people buying in person, online and over the phone.  Top price peaked at 16,000gns which levelled out to the average price of £7121, up by £347 per head, on the previous year. 93 animals were put forward with a 71% clearance rate.

British Charolais Cattle Society CEO, Peter Phythian said “he was pleased with the good strong commercial trade on the day, with the Charolais breed still in high demand” 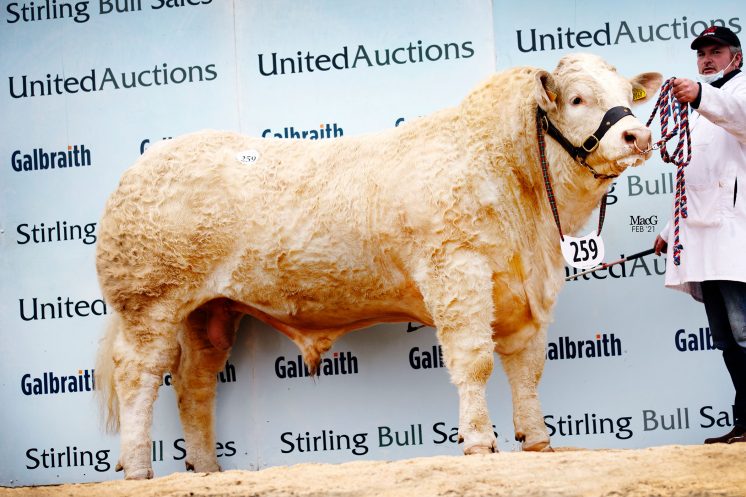 BALLINLARE PHANTOM was the top seller of the day reaching a top price of 16,000gns.  This 20-month-old lad is bred by J H Wilson and Sons of Newry, Co. Down.  Phantom’s sire, Balthayock Justice was Reserve Supreme Champion and was the top sale price at 50,000gns at Stirling in 2015.  His dam Ballinlare Isis is sired by Goldies Carnival.  The winning bidders, in a two-way split, were R M Adam & Son of Glamis, Angus and M J Massie from Ellon, Aberdeenshire 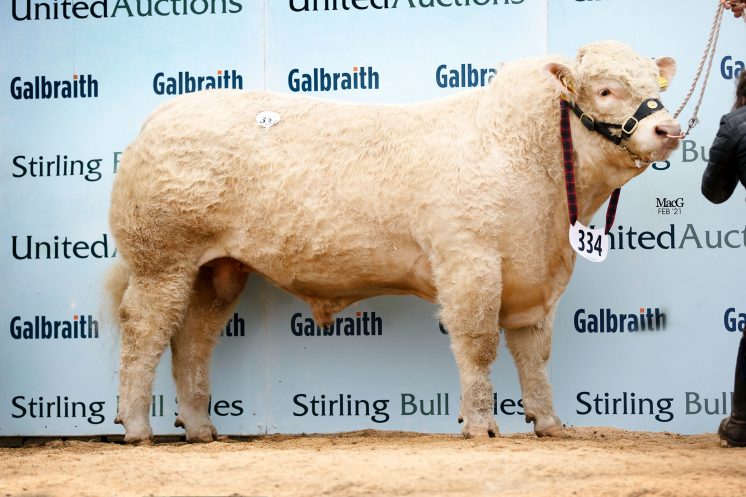 Second top price of the day at 14,000gns was SOLWAYFIRTH PETERPAN, bred by I & D Goldie in Annan, Dumfriesshire.  This 17-month-old lad is sired by the 11,000gns Glenericht Majestic, his dam Solwayfirth Charity is the daughter of Maerdy Restful.  He will be joining the herd at Hafod Yr Esgob Uchaf in Bala at the farm of G M Jones.

A trio of bulls sold for the next highest price of 12,000gns. 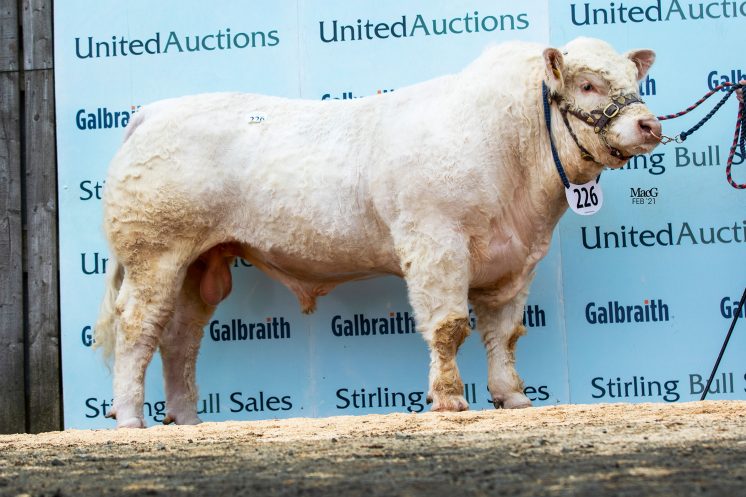 First to reach 12,000gns was ELGIN PELE from Mr R A Milne in Elgin, Morayshire.  Described as ‘one of the better bulls in the yard’ the 22-month-old bull is by the easy calving Westcarse Houdini, his dam, Elgin Electra, is a full sister to the 20,000gns Elgin DaVinci and a daughter of Harestone Tyrol . The successful bidder was James Moir of Auchorties Farm, Banff. 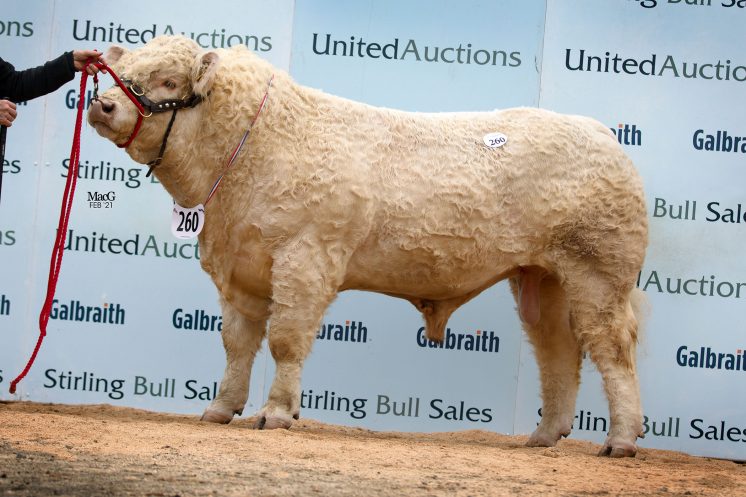 The second bull to reach 12,000gns was ELRICK PATRIOT, he is sired by Maerdy Gouverneur and bred by Mr M J Massie from Ellon in Aberdeenshire.  Patriot, out of Elrick Lass, a daughter of Thrunton Fearless, the 2011 Intermediate and Supreme Champion, who sold for 16,000 gns at Stirling. Patriot will be making the journey to his new home with J & W Kellas at Raws Farm, Keith. 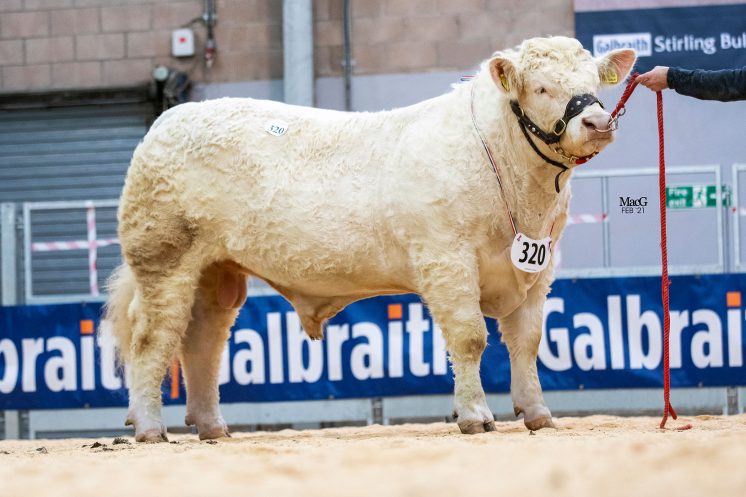 The final bull to reach 12,000gns also from the same stable of Mr M J Massie.  20-month-old ELRICK POLDARK is the full brother to Elrick Outlaw who sold for 25,000gns and is the son of the easy calving Maerdy Gouverneur.  His dam, Elrick Florida, is a daughter of 11,000gns Maerdy Dublin.  He is going home with Glass & Smith, Mills of Folis, Aberdeenshire. 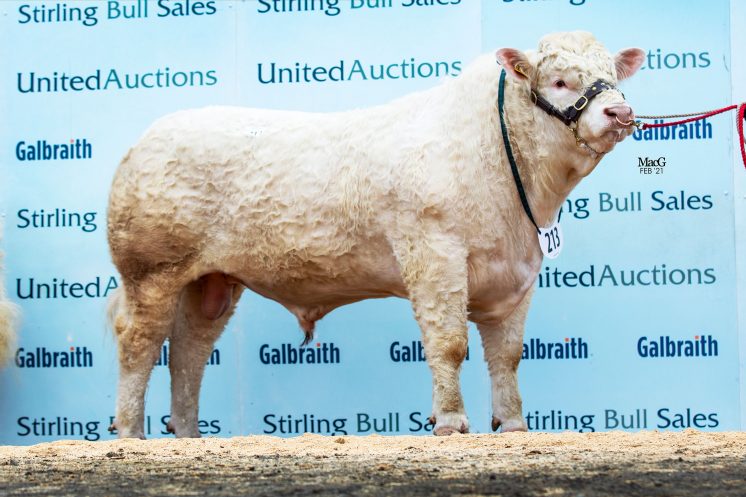 Four bulls went on to make 10,000gns, the first one secured the bid was THRUNTON PLATO, bred by J H C Campbell & Sons of Alnwick, Northumberland.  This 22-month-old Plato is sired by the 28,000gns Maerdy Jerusalam and is out of Thrunton Jessie J, a daughter of Burradon Garibaldi, who sold for 26,000gns at Stirling in 2013.  He will be joining the farm of W Pringle and Son of Yorkston Farm, Mid Lothian. 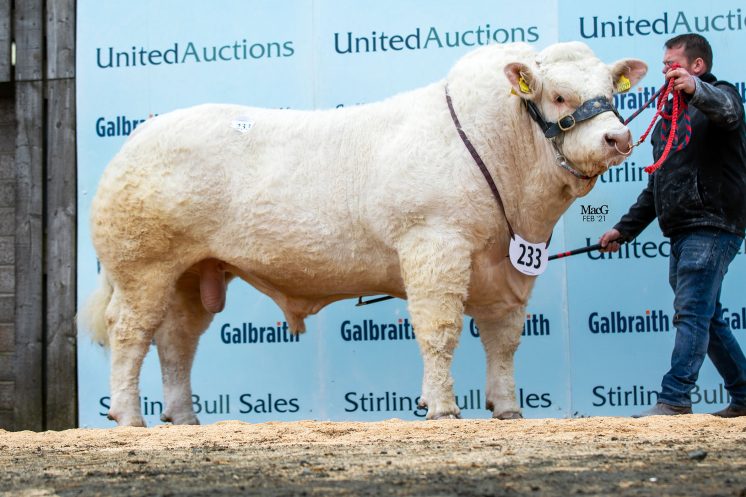 The next to sell at 10,000gns was AULTMORE PHANTOM from the farm of W Patterson & Son from Keith, Bannfshire. Phantom is a very stylish bull from an easy calving line.  His sire, Westcarse Houdini sold for 14,000 gns in 2013.  His dam is Aultmore Lassie, a daughter of Aultmore Gladiator.  The men behind the money were R O Chandler & Co from Skirrid Farm, Abergavenny. 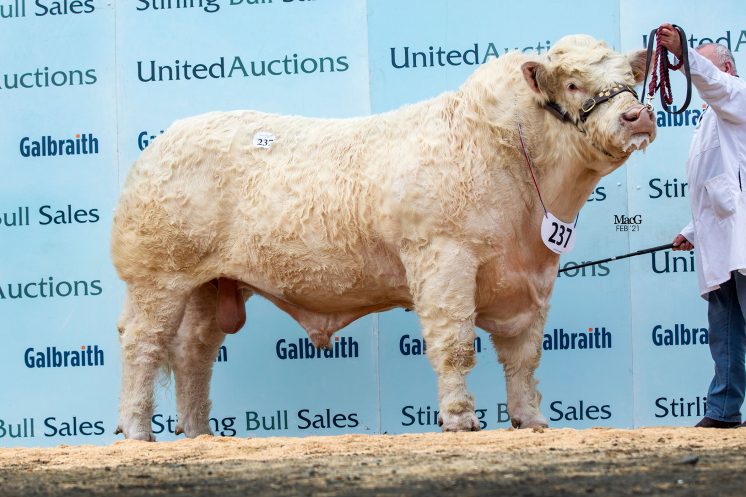 E & M Fairhurst & Son from Bankend Farm, by Lancaster secured the next successful bid at 10,000gns who take home FALLENINCH PACO, a 21-month-old bull bred by Mr A B Hornall from Falleninch Farm, Stirling.  Paco is fully parent verified and is sired by Falleninch Memo, out of Falleninch Libby, a daughter of Dereskit Fernando. 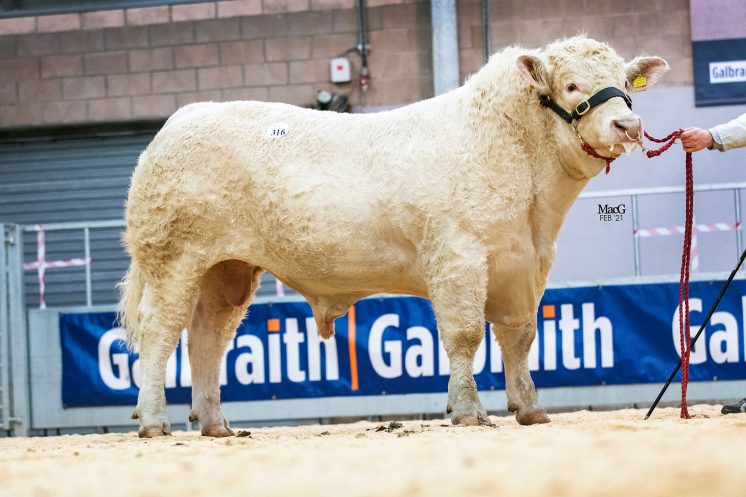 The final bull to make 10,000gns was GOLDIES PAUL who comes from the farm of Mr H Goldie in Dumfries.  This outstanding 18-month-old lad is out of Goldies Jo, a daughter of the easy calving Blelack Digger. His sire is Balthayock Marquis, who is known for easy calving.  His new owner is J S Fraser from Toir Mains Farm, Ross-Shire. 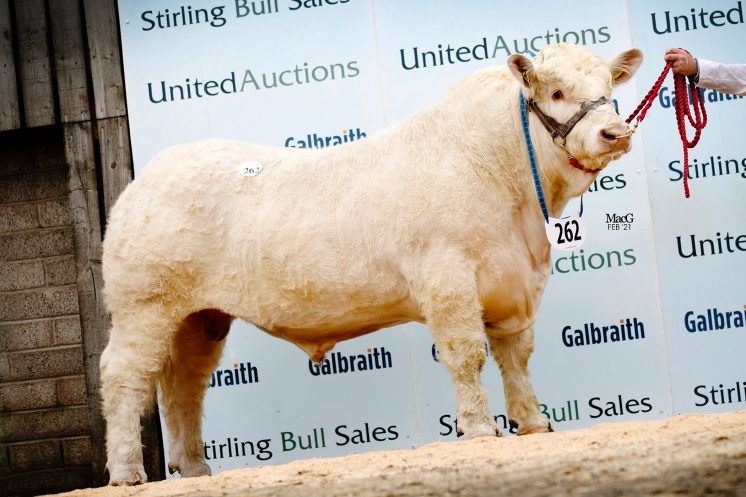 Just behind, with a bid of 9,000gns was CARWOOD PIONEER.  The 20-month-old lad is sired by the 12,000gns Maerdy Magestic, a son of Maerdy Grenadier who sold for 20,000gns at Stirling in 2013.  His dam, Carwood Hilda is a daughter of Elgin Emperor.  This 20-month-old bull is bred by Mr & Mrs C J Wight of Biggar, Lanarkshire and will be joining the herd at Hyslop Farm in Moffat, Dumfriesshire.

The next best seller was MIDSHIELD PAUL who sold for 8,500gns, bred by J & E Wight of Biggar, Lanarkshire. This fully parent verified 22-month-old bull is sired by Midlock John and out of Midshield Jazmin, the daughter of Maerdy Domino.  He will be heading home with F & G Young of Balnowlart, Ayeshire.

Eight seemed to be the number of the day with 8 lots selling for 8,000gns. 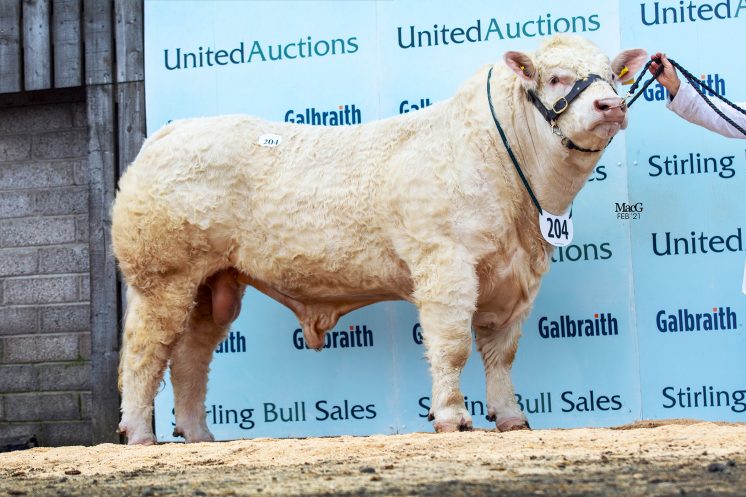 The first two to sell at this price were from the Kersknowe herd of Mr J Jeffrey of Kelso, Roxburghshire.  First to go under the hammer at 8,000gns was KERSKNOWE PATRIOT, sired by Kersknowe McGregor, a son of Inverlochy Fencer who was junior and overall supreme champion and sold for 20,000gns at Stirling in 2012.  His dam, Kersknowe Iris is sired by Lagavaich Fernando.  He will be making his way home with Duncan Macvicar from Middle Ballat Farm in Glasgow. 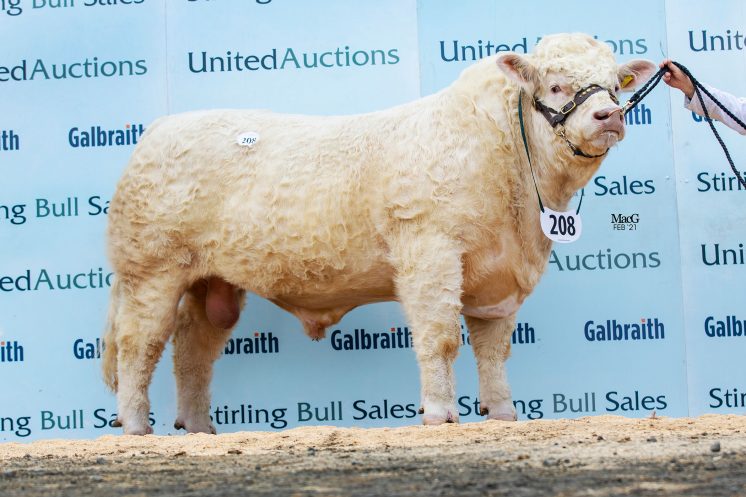 Mr Jeffery’s second bull to make 8,000gns was 22-month-old KERSKNOWE PROVOST who is sired by the 20,000gns bull Inverlochy Fencer.  His dam, Kersknowe Icicle is another daughter of Lagavaich Fernando; he will be joining the herd at Craigton in Kirkcudbrightshire at the farm of A & J Craig. 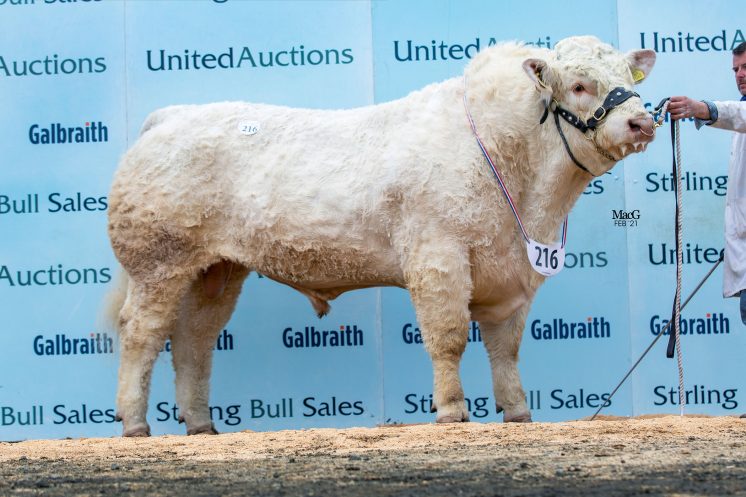 BALLINDALLOCH PILOT was the next one to sell at 8,000gns. This 22-month-old lad is bred by Messrs R Irvine & F G Lawson of Ballindalloch, Banffshire. Sired by Goldies Icon, the 2015 Reserve Junior Champion who sold for 10,000gns at Stirling.  His dam, Ballindalloch Hilda is sired by Lochend Apache.  He is going home with R MacDonaldson & Son from Drumgask, Inverness-shire. 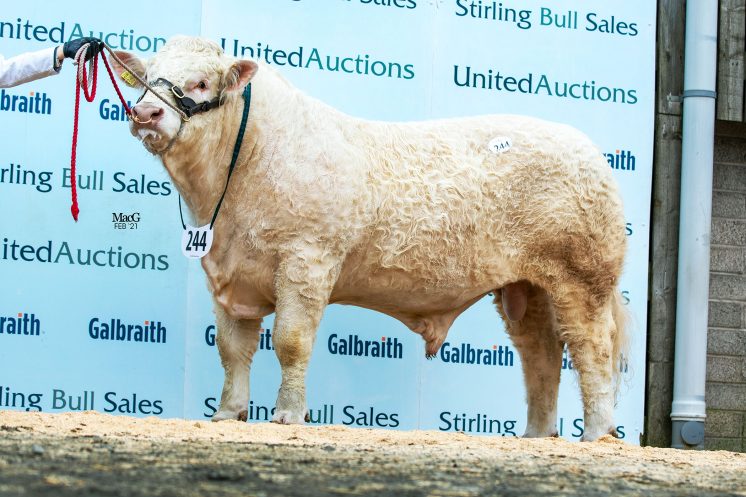 THRUNTON PEGASUS was next to reach 8,000gns, bred by J H C Campbell & Sons in Alnwick, Northumberland. Born in May 2019, this bull is sired by the 28,000gns Maerdy Jerusalem, and out of Thrunton Jubilant, a daughter of Thrunton Gladiator.  He will be making his way to his new home in Inverness to the Leys Estate. 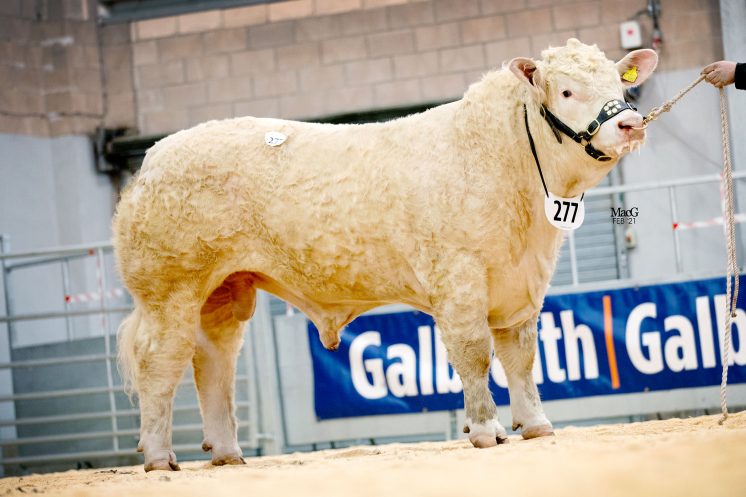 MAERDY PASSION, bred by Mr D E Evans in Mold, Flintshire.  This 20-month-old is sired by Maerdy Figaro-W and out of Maerdy Jiffy, one of the best daughters of Meardy Dynamite in the herd.  The winning bid of 8,000gns came from Bruce Mackie & Son from Huntly in Aberdeenshire. 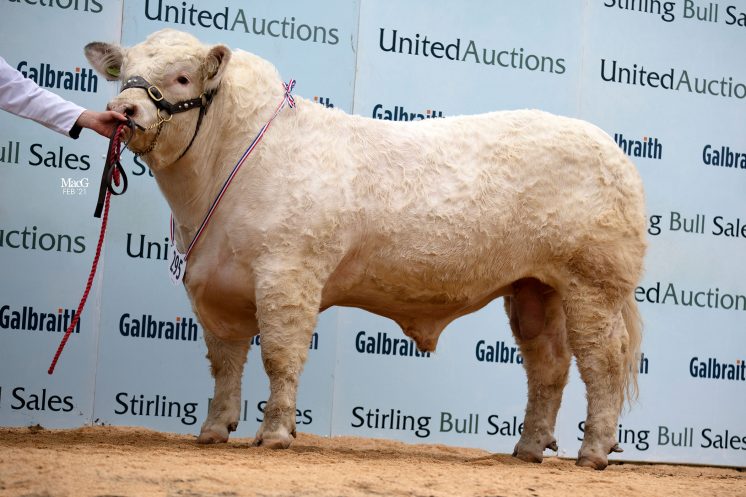 Next to sell at 8,000gns was HARESTONE POWERHOUSE, bred by R & N Barclay in Insch, Aberdeenshire.  Sired by the 10,000gns Blelack Fabulous, and out of Harstone Denise, a daughter of Harestone Uruguy.  His new owner is A McCornick & Co from Barnacles Farm in Dumfries. 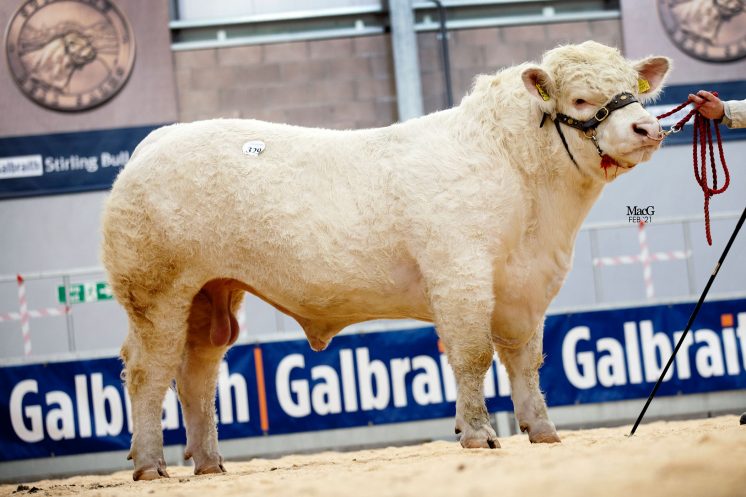 Mr H Goldie of Ruthwell, Dumfries secured the two final bids of 8,000gns.  GOLDIES PIONEER was the first; this 17-month-old lad is sired by the 2017 Royal Highland Show Reserve Male Champion, Junior Male Champion and Reserve Junior Champion Tweeddale Matador.  Out of Goldies Lottie, a daughter of Gretnahouse Heman. Pioneer will be making his way to his new home with J Kay & Sons to Oxton, Berwickshire. 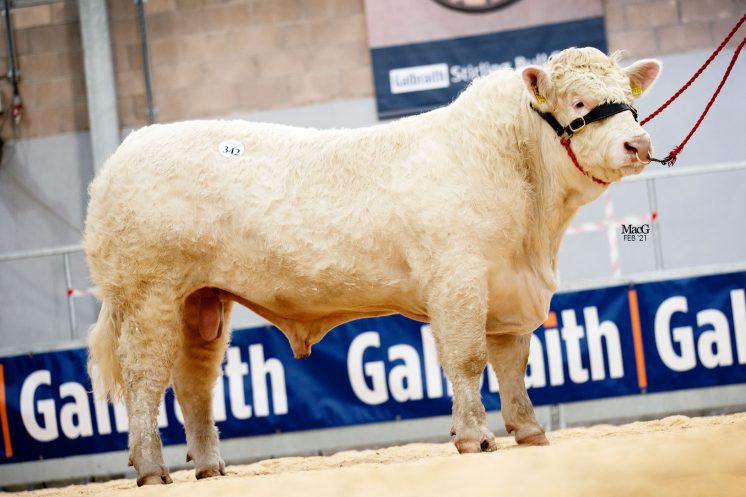 And finally, GOLDIES POWERHOUSE was the last to hit 8,000gns.  This 17-month-old is sired by Blelack Fabulous and out of Goldies Fabulous, a daughter of Goldies Uppermost who claimed the top price at Perth in 2005, selling for 34,000gns and was also Supreme and Junior Champion.  The winning bid came from A J MacLean from Heylipol Farm from the Isle-of-Tiree.

The gavel came down twice at 7,500gns.  The first to secure this bid was 21-month-old AULTMORE POWERHOUSE from the farm of W Patterson and Son from Keith, Banffshire.  He is sired by the 30,000gns Dingle Hofmeister.  His dam, Battleford Lola is sired by Lochend Apache. The successful bidder was W S L Muir from Stenness, Orkney.

BALTHAYOCK POLITICIAN was the next to sell at 7,500gns.  This 20-month-old lad comes from the herd of Major D F W H & N R Walter in Perth and is sired by Gretnahouse Lunar.  His dam, Balthayock Insignia is a daughter of Blelack Forester.  Politician was purchased by the Scottish Government Bull Stud.

Just behind and selling for 7,200gns was the May 2019 born BALTHAYOCK PILGRIM, another from the herd of Major D F W H & N R Walter in Perth.  Pilgrims sire is Gretnahouse Lunar who is proved to be very easy calving and produces well fleshed bulls with excellent temperaments.  His dam, Balthayock Lotus is a daughter of Balthayock Dante.  Pilgrim was purchased by J M Fisher Ltd from Leswalt in Stranraer.

Also selling for 7,200gns was THRUNTON PATRIOT, an 18-month-old bull from the home of J H C Campbell and Sons in Alnwick.  Patriot was sired by the 20,000gns Stirling Champion Inverlochy Fencer and caught the eye of G T & S Coghill, who will be taking him home to Muce in Orkney.  His dam is Thrunton Melody who is a daughter of Thrunton Gladiator.

THRUNTON PEDRO is a good square 21-month-old lad who comes from the same stable as Thrunton Patriot.  His sire is the 28,000gns Maerdy Jerusalem; his dam, Thrunton Jackdaw is sired by Thrunton Gladiator. Pedro sold for 7,000gns and will be going home with W & A Strachan of Millfield, Aberdeenshire.

Another bull selling for 7,000gns was 21-month-old CARWOOD PABLO.  Pablo was brought to the market by his breeders Mr & Mrs C J Wight from Biggar, Lanarkshire. Pablo is out of Carwood Cherry, the daughter of Kelton Trident, and sired by Maerdy Magestic. He will be making his way to his new home in Maybole with J & A Dunlop

Four females were entered for the sale.

Up first, and reaching the top sale price of 4,800 gns was TOPHILL ROXANNE from the stable of Mr A J Stott of Canonbie, Dumfires-shire.  11-month-old Roxanne is sired by Hackleton Largerlout and her dam Hackleton Hetty is the daughter of Mulroog Alpine.

Next in the ring came the second top priced female of day, selling for 3,000gns. MORTIMERS PACHAMAMA caught the eye of Louise McArthur of Balfron Station, Glasgow. This 16-month-old heifer is bred by Messrs Mortimers Farm in Eastleigh, Hampshire and is sired by Farleycopse Laurence, her dam, Mortimers Icemaiden, is sired by Baggrave Eskimo.

The final two heifers to go under the hammer were CROOKDAKE PARIS and CROOKDAKE PROSECCO both bred by DA & SM Miller of Wigton, Cumbria. These were sold for a total of 4,800gns to E & M Fairhurst and Son, at Bankend Farm, by Lancaster