British Charolais records were smashed at the rebranded Stirling bull sales on Wednesday 24 October, when Vexour Garth was bid to 100,000gns, a new world breed record, together with a new centre cattle breed average of £7,699 for 90 bulls sold at the society’s official autumn show and sale. Bred and exhibited by Jan Boomaars, Woldingham, Surrey, Garth sold to the Livestock Capital Partnership, a US based private company.

“Today’s high point was an exceptional historic moment for the breed in its 50th anniversary year and demonstrates the growing confidence for modern British Charolais genetics both globally and in the home commercial marketplace,” commented society chairman, Alasdair Houston.

“Overall demand remained strong right until the end of the five hour day with the momentum for high performance easy calving bulls driven by commercial farmers who understand the Charolais advantage of higher value calves at all stages of the producer chain. Modern British Charolais genetics can offer the Holy Grail of ease of calving without sacrificing growth and carcase performance. The evidence is there for all to see at the suckled calf sales, in the store ring and from finishers. What I would say to producers not yet using modern British Charolais bulls is – don’t miss out…come and join us.” 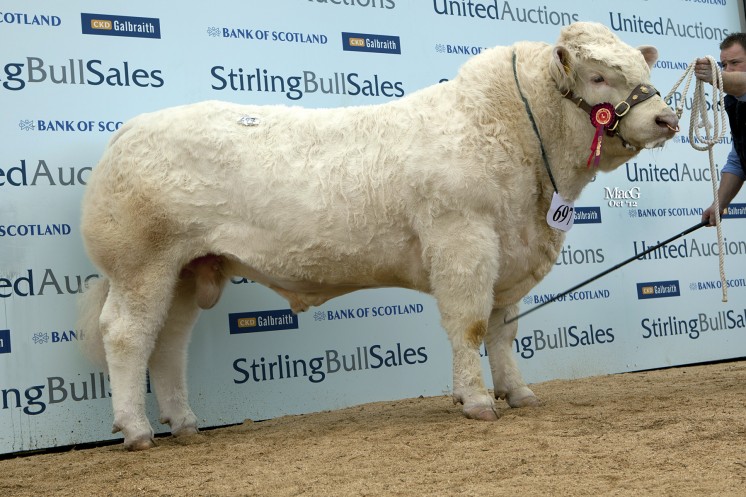 Vexour Garth (pictured) TI +71, SRI +74 was a first prize 19 month old by Dingle Hofmeister and out of a homebred dam going back to Maerdy Tally. Within two minutes of entering the ring he had been secured in a telephone bid by the American company operating in both the USA and South Africa and trading in the global marketplace. Following statutory quarantine, he will move on to a UK based AI centre for semen collection.

“Garth showed potential from a very early age, he is a heifer’s calf out of a prolific Vexour female line, with good locomotion and milk. I knew that there was interest in the bull, but clearly not to this extent,” said Mr Boomaars. “I believe he was in good demand because he is a very traditional, well balanced bull and clearly has the figures to back him up.” Garth is within the breed’s top 1%. The Vexour herd which comprises 125 cows was established by Mr Boomaars in 2003. “We choose Charolais simply because it is one of the most important terminal sire breeds in the world, with true commercial merits and outstanding character.”

The day’s next highest call of 17,000gns was shared by two entries. First to go was Balthayock Gunner TI +56, SRI +56, a 17 month old from Major David Walter, Perth and led out by herd managers, David and Tracey Nichol. Sired by the 22,000gns Balbithan Vespasian, he was out of a home bred dam by Barbican Lancer and sold to Swalesmoor Charolais to run with its 30 cow Lockerbie based herd. “This bull had natural fleshing and quality throughout as well as good figures to match, said herd manager, Iain Campbell.

The second 17,000gns bid went to Blackford Gladiator TI +49, SRI +39, a 17 month old from Anne Macpherson, who runs an eight cow herd at Croy, Inverness. He was by the 22,000gns Newhouse Bigal, out of a homebred dam going back to Burradon Talisman and knocked down sold to Ian Kellas, Dufftown, Keith to run with his 75 cow suckler herd. “Gladiator was the pick of the crop and demonstrated two essential characteristics – he was long and clean,” he said.

Next at 15,000gns was the 18 month old Elrick Gallant TI +62, SRI +56, a son of the 11,000gns Maerdy Dublin and out of a Blelack dam by Thrunton Damien. Bred and exhibited by Michael Massie, Ellon, Aberdeen, he headed to south Wales with suckler finisher producer Eurof Jones, Dryslwyn, Carmarthen to run with his 200 cow suckler herd and 25 pedigree cows. “Gallant is well bred and he’s got the accompanying good figures,” he said.

Michael Massie also turned out Elrick Goldrush TI +36, SRI +32, a 17 month old, again by Dublin and out of a homebred by Blelack Nextnews. He made 7,800gns to J Guild, New Cumnock, Ayr.

A bid of 14,000gns secured Ashby Gucci TI +41, SRI +41 for Jack Anderson, for his 150 cow suckler herd and 12 pedigree cows based at Cloy, Fortrose. Selected for his ‘tremendous length and size’, this 16 month old Burradon Talisman son was out of the 4,600gns Gretnahouse Caresse and bred and exhibited by David Noton, a fishmonger with a six cow herd based at Ashby-Cum-Fenby.

Minutes later, the day’s second 14,000gns call was made by Jarka Robinson, Tenbury Park, Worcester for Maerdy Gent TI +74, SRI +74, a 16 month old by Blelack Digger and out of a homebred dam from Flintshire vet, Esmor Evans, Mold. Another 16 month old Digger son from Mr Evans, this time the Maerdy Greaselightening TI +63, SRI +60 was knocked down sold for 8,500gns to Balbirnie Home Farm, Freuchie, Fife.

Topping the entries from the Campbell family, Ian, John and father Colin from Thrunton, Alnwick at 13,000gns to WJ Whyte, New Abderdour, Fraserburgh, was the reserve intermediate champion, Thrunton Gabriel TI +54, SRI +45, an 18 month old and one of the first sons of the 26,000gns Perth senior champion, Balmyle Dickler.

Thrunton bred Dickler sons proved to be in demand, he sired six out of their seven lots to come under the hammer sold to average £9,922, and they made up the best group of three. Next at 12,000gns was Thrunton Galaxy TI +61, SRI +52, a 19 month old out of the hombred dam going back to Mowbraypark Orlando. The buyers were John and Jenny Rix, Nayland, Colchester.

The Dickler sons included Thrunton Goldsmith TI +45, SRI +35, an 18 month old out of a Blelack Jaguar sired homebred dam selling for 10,000gns to RT Watkins, Cold Brook, Abergavenny. A bid of 9,000gns secured the 18 month old Thrunton Geraldo TI +46, SRI +41 for Balbirnie Home Farms, while Thrunton Gallant TI +51, SRI 44, a 17 month old whose dam went back to Mowbraypark Orlando, was sold for 7,200gns to Alan Williams, Aberdaron. The Campbells were also in the money at 9,500gns with the 18 month old Thrunton Goldstar TI +48, SRI +44, by Newhouse Bigal. He sold to H and J Braes, Kincardine, Alloa.

Next to go at 13,000gns to K Eunson, Deerness, Orkney, was the 16 month old Glencoe Galliant from Valerie McDonald who runs a 16 cow herd at Killeavy, Newry. Led out by her builder husband, Paddy, Valiant was by Plexus, one of the top bulls at Tully performance test station. Twenty four hours earlier he had been awarded the reserve junior champion, however he was no stranger to the ring having amassed a number of awards on the 2012 circuit including reserve junior champion at the Balmoral Show.

John and Jim Jeffrey, Kersknowe, Kelso invested 12,000gns in Harestone Glenlivet TI +59, SRI +54 bred and exhibited by Neil Barclay, Insch. A 19 month old by the 25,000gns Perth champion Goldies Unbeatable, he was out of a homebred dam going back to Erriff lines.

Wissington Genius TI +62, SRI +63, a 21 month old by Gretnahouse Ultimate and out of a homebred cow going back to Burradon Talisman made 9,500gns to commercial producers, RK Bryce and Son, Kinloch, Blairgowrie. Bred by John and Jenny Rix and led out by their herd manager, Pieter Hattingh the previous day he stole the limelight when he was awarded the senior championship before going on to take the overall supreme title by judge, French Charolais Herd Book president, Michel Baudot who was making his debut in the British ring. “Genius was almost perfect,” he said. “He had a good top line, muscling, legs and locomotion and no fat. He would certainly be able to compete in the Paris Show classes.” Genius has certainly lived up to his name for the Rix team being their most successful homebred animal since establishing the 70 cow herd just six years ago. He had already secured the silverware at both East of England and South of England. “Wining the Stirling title is a dream come true,” said Pieter. “We always strive to breed better cattle, and Stirling was our ultimate goal, however we never expected it would arrive so soon.”

Standing below Genius in reserve senior place was Woodpark Gregg TI +39, SRI +28, a 19 month old from Wil Short, Beragh, Omagh. This Doonally New son was out of a Greyoak bred dam by Simpsons Gregg from his 35 cow herd. Gregg made 9,500gns and continued his journey across the water with JI and WN Stout, Stronsay, Orkney.

Leading Hamish Goldie’s team at 9,000gns was Goldies Governor TI +62, SRI +60 and with a +17.9 calving ease direct EBV, the highest in the catalogue. A 16 month old by the 8,000gns Blelack Blackberet, he was out of a Maerdy Naser sired homebred dam from his 75 cow herd based at Ruthwell, Dumfries. The buyers were K and G McRae and Sons, Clatt, Huntly.

Mr Goldie continued his success with two entries sharing an 8,500gns bid. First to go was Goldies Golddust TI +60, SRI +55, by the 35,000gns Goldies Uppermost and selling to M Bruce and Partners, Mains of Logie, Ellon. The second 8,500gns bid was made by A Smellie and Partner, Peebles for Goldies Guide TI +63, SRI +59, a 13 month old Blackberet son and out of a Naser bred dam.

Iain and Dot Goldie, Cummertrees, Annan offered their highest at 7,800gns to JM Nisbet, Sorn, Mauchline. Solwayfirth Greig TI +54, SRI +45 was by their homebred Solwayfirth Banker going back to Brampton lines and out of a homebred dam.

Father and son team, Neil and Graeme Massie, Aboyne, sold their highest entry at 7,200gns to T and M Seatter, Westray, Orkney. Blelack Galaxy TI +47, SRI +38 was an 18 month old by the 15,000gns Goldies Dynamite and out of a homebred dam going back to Bassingbourn lines. Minutes before the Massies offered another same age Dynamite son, this time Blelack General TI +59, SRI +48 at 7,000gns to the Williams Partners, Blackmill, Bridgend.

The female section was topped at 8,500gns by the last entry in the ring, a cow and calf pair from Anne Macpherson. Blackford Debbie TI +40, SRI +40 was a four year old by Burradon Talisman, out of a homebred dam and sold with her four month old bull, Blackford Hercules, a Newhouse Bigal son. The pair sold to JM Stewart, Drumoak, Aberdeen.