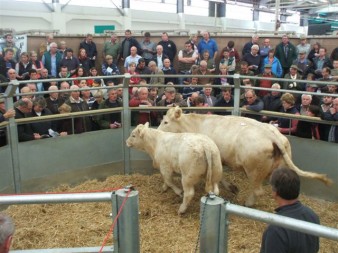 A two year old Charolais heifer topped the bidding at 4,800gns in Welshpool on Saturday 15 September when John Evans dispersed his Lowerffrydd herd.

Sale topper was Lowerffrydd Foxylady TI +34, SRI +31, a Goldies Champion daughter and out of a homebred dam by Kilcullen Ted. The buyer was JA Williams, Caersws.

Next at 2,600gns was a cow and calf pair to FI and LJ Evans, Gower, Swansea. Lowerffrydd Bouquet TI +34, SRI +31 was a six year old Doonally new daughter and her five month old heifer, Lowerffrydd Helen was by Killadeas Contact.

A bid of 2,100gns secured Lowerffrydd Grand TI +34, SRI +31 for JS Abel, Llanidloes. This rising yearling bull was by Kilcullen Ted and out of Lowerffrydd Eclipse, a three year Bailea Ulysse daughter who was knocked down sold for 1,600gns to BJ Mould, Stafford.

Harviestoun Vanilla led the trade at 9,500gns with the bull calf Harviestoun Heathcliff

Charolais were in demand selling to 9,500gns in Stirling on Saturday 15 September when the Harviestoun and Klibreck herds came were dispersed on behalf of L Poett, Perth, Perthshire and I Mackay, Watten, Caithness, respectively.

Leading the sale at 9,500gns was Harviestoun Vanilla TI +38, SRI +34, an eight year old cow by Lochend Rasper, out of a homebred dam and her March born bull calf, Harviestoun Heathcliff by Ravensworth Unwin. The pair were knocked down sold to N C Smith and Sons, Lesmahagow, Lanarkshire.

Also secured for 5,500gns was Harviestoun Goldie TI +36, SRI +40. This 17 month old heifer was by the 38,000gns Goldies Champion, out of a homebred dam and sold to A B Hornall, Stirling, Stirlingshire.

Back in the females and Barochan Trinket, a 10 year old by Barochan Petral and out of Thrunton Hostess sold with her five month old bull calf, Harviestoun Herman, to H P and L S Whittaker, Cornhill on Tweed, Northumberland for 5,200gns.

Bids of 5,000gns came twice with the three year old Harviestoun Eileen TI +48, SRI +46, by Harviestoun Bermuda and out of a homebred dam leading the way. This one was sold with her January born commercial steer calf at foot to J Hepburn and Co, Hawick, Roxburghshire.

Harviestoun Ember TI +63, SRI +50, another three year old heifer by Unwin along with her eight month old commercial heifer calf were knocked down sold at 5,000gns to I Thomson, Ellon, Aberdeenshire.

The 11 year old Harviestoun Snowdrop TI +59, SRI +50, by Harviestoun Marseille and out of Rushmore Clover, was secured by Messrs Leevy, along with her five month old bull calf Harviestoun Hector at 4,200gns.

The Klibreck dispersal peaked at 3,000gns with the two year old Klibreck Flora by Edenhurst Pioneer knocked down sold to A Stevenson, Anstruther, Fife. The same buyer also took home the 15 month old Klibreck Gemaine, also by Pioneer, for 2,800gns. 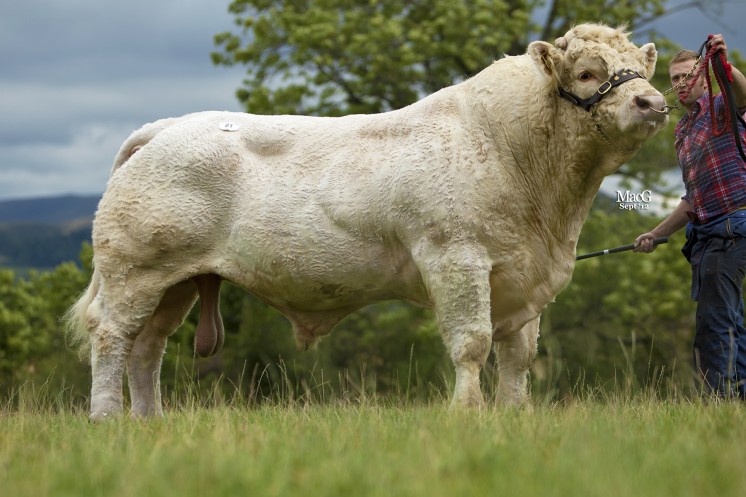