Charolais once again returned to Stirling for United Auctions’ bull sale on Sunday 2 May 2021, where bids flowed freely both in-person and remotely via the internet and phone. While the late spring sale is typically smaller than its February counterpart, there was no compromise on the quality of animals present. A total of 21 bulls were sold, resulting in a clearance rate of 58% and an average price of £5,615, up £370 on last year’s lockdown sale. 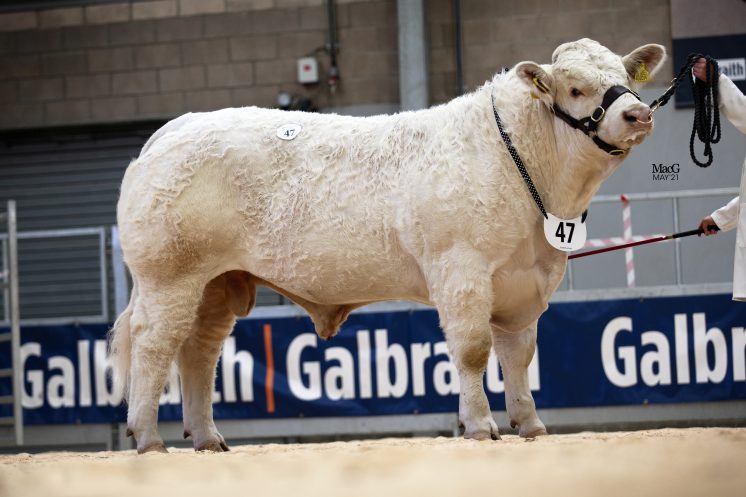 The highest bid of the afternoon, at 9,500gns, was secured by PANMURE PRINGLE from the herd of J M Cant & Partners of Arbroath, Angus. Pringle is the latest in his paternal lineage to reach impressive prices. His sire is the 12,000gns Elrick Jester, and his grand-sire is Thrunton Fearless, who reached a price of 16,000gns in 2011. Pringle’s dam is Panmure Isabella, a daughter of the popular Blelack Digger. This attractive 16-month-old bull is already showing great potential with a 200-day weight  EBV of +38, placing him firmly in the top 1% for this trait. Pringle will be making his way to Fortrose, Ross-shire, to the farm of winning bidder J H Anderson. 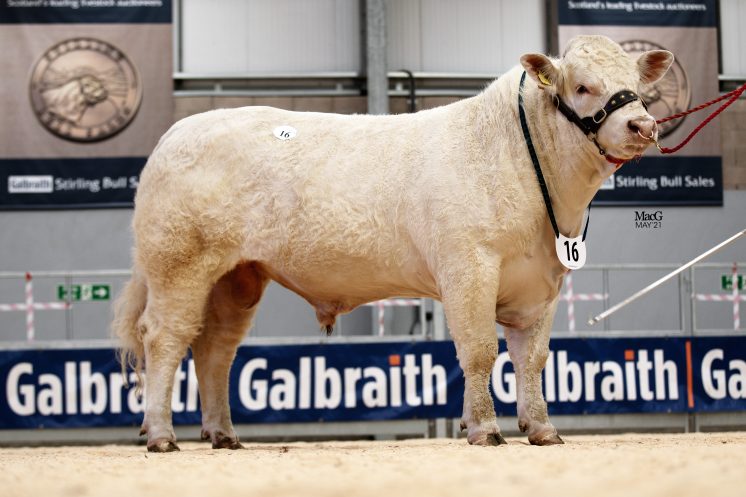 Reaching the second highest bid of 8,000gns was the 19-month-old THRUNTON PIONEER. Pioneer was bred by J H C Campbell and Sons of Alnwick, Northumberland, and is backed up with a notable lineage. He was born to Thrunton Flamenco, a daughter of the 22,000gns Newhouse Bigal, and sired by the 26,000gns Balmyle Dickler. Pioneer will be going home with W Pringle & Son to their farm in Gorebridge, Midlothian. 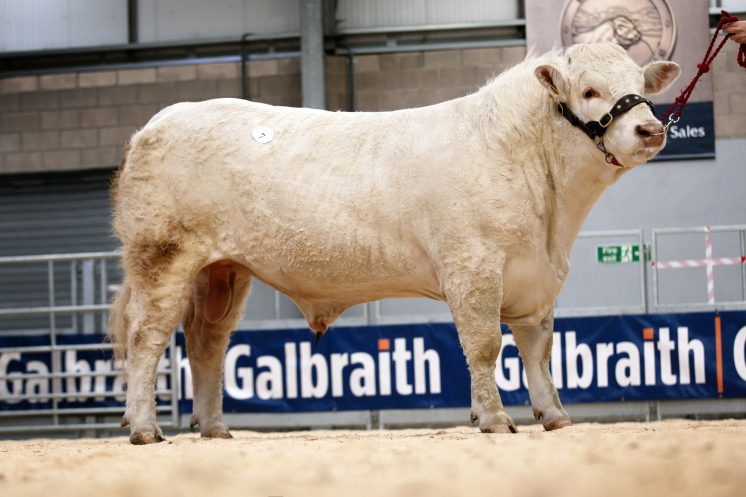 Two bulls sold for the next highest prices of 7,500gns, both of which are also from the herd of J H C Campbell and Sons. The first to sell was THRUNTON PELE, one of the older bulls in the running at 22 months-old. Pele is sired by Maerdy Jerusalem, who reached a price of 28,000gns at Stirling in 2015, and his dam is Thrunton Malibu, a daughter of Thrunton Gladiator. He caught the attention of B Kier & Son, who will be introducing him to their herd in Alford, Aberdeenshire. 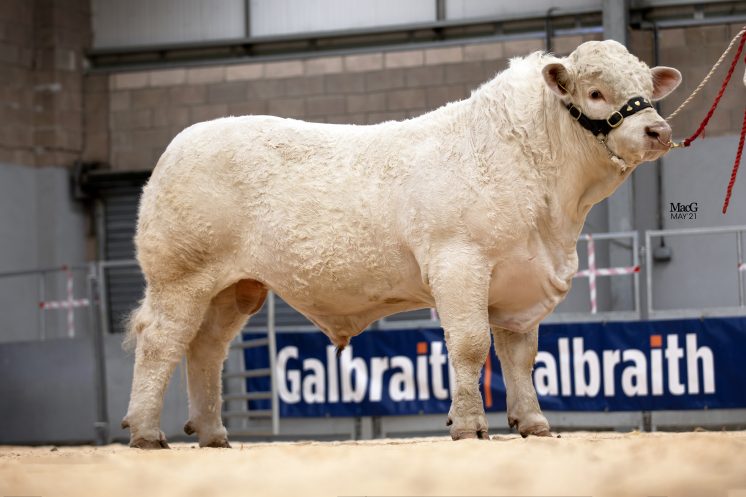 Also reaching 7,500gns was Pele’s younger cousin, THRUNTON PONTIAC. Pontiac boasts an impressive +14.6 calving ease EBV, a trait that’s prominent in his ancestry. His sire, Thrunton Nevada, is a son of the notoriously easy-calving Blelack Digger, and his dam is another of Thrunton Gladiator’s daughters, Thrunton Josephina. Pontiac is certain to settle in nicely at his new home in Blackhills, Peterhead, under the care of A & L Craig and Co. 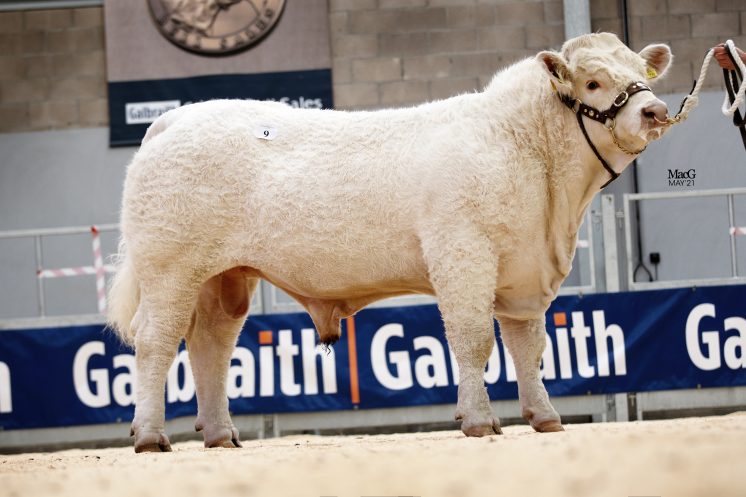 The 20 month-old NEWLOGIE PRINCIPAL achieved the next highest price of 6,000gns. Principal was bred by AJR Farms of Ellon, Aberdeenshire and was sired by the easy-calving Newlogie Nobel. His dam, Maerdy Modryb, is a daughter of Maerdy Hearthrob, who sold for 26,000gns at Stirling in 2014. He will be heading back to Grantown-on-Spey, Morayshire, with J & J Marshall.

A trio of bulls achieved a price of 5,500gns, the first of which was LOGANBAR PETROUS. A local bull, this 20 month-old hails from the farm of Mr D M Lyle of Dunblane, Perthshire. Petrous has exhibited excellent growth rates throughout his life and has grown into a strapping lad with plenty of bulk behind him. He was sired by the Irish-born Lisnagre Jamson and out of Loganbar Isabella, a daughter of Wesley Fixture. The winning bidder was J D Bilsland, who will be introducing Petrous to his herd in Croftamie, Glasgow. 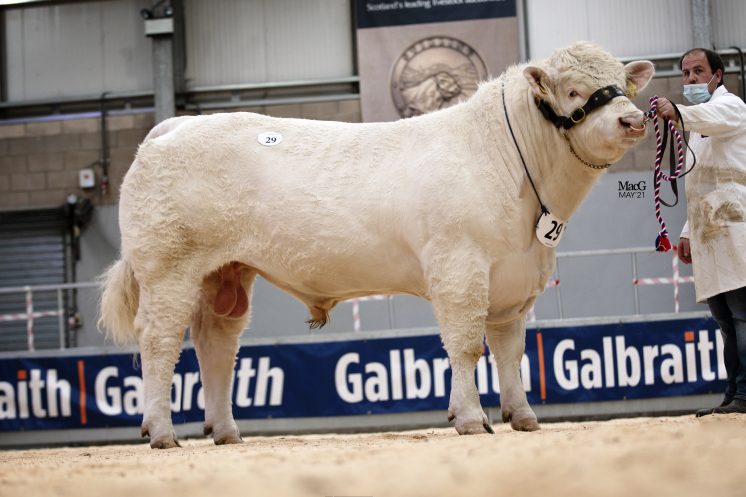 Two sibling heifers’ calves from the herd of Mr & Mrs J W Millar in Port of Mentieth, Stirlingshire, also sold for 5,500gns. First to sell was LOCHEND PEDRO, a charming 18 month-old born to dam Lochend Nuvette, a daughter of the award-winning Gretnahouse Archangel. Pedro’s sire is Gretnahouse Ming, a son of the tremendously easy-calving Wesley Equinox. Pedro will be making his way to his new home at the farm of M Dykes in Kilmarnock, Ayrshire. 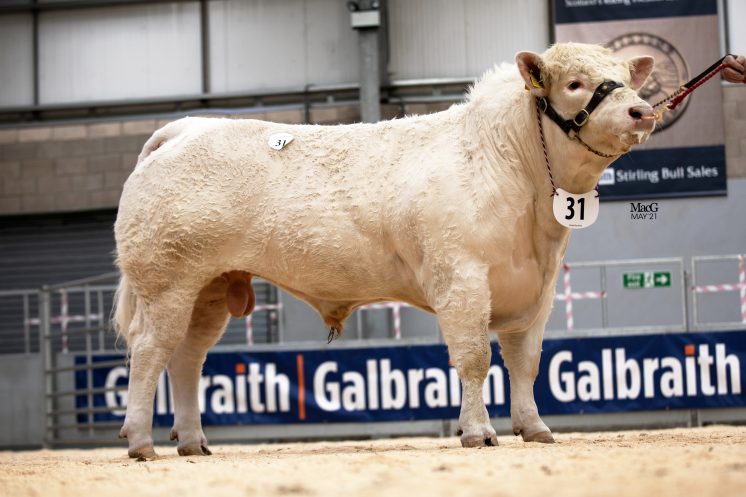 Hot on his brother’s heels, and selling only moments later, was LOCHEND PLUTO. Pluto was also sired by Gretnahouse Ming, but was born instead to Lochend Nova, a daughter of the easy-calving Mortimers Echo. This impressive family history of calving ease has continued through Pluto, who is within the top 1% for both calving ease and birth weight EBVs. Pluto’s lucky new owner is Mr Turner of Strath Farm, Campbeltown.

GOLDIES PILAR managed to secure the next highest bid of 5,200gns. This 18 month-old was bred by the well-known Mr H Goldie of Ruthwell, Dumfries. He was sired by the award-winning Tweeddale Matador, who sold for a price of 10,500gns in 2017, and is out of Goldies Icequeen, a daughter of Goldies Formidable. Pilar will be heading up to Inverness, to the Scottish Government’s Bull Stud facility at Knocknagael.

The hammer came down a total of three times at 5,000gns, firstly for HARESTONE PERU, a charming young bull from the herd of R & N Barclay in Insch, Aberdeenshire. Peru was born to Harestone Julie, a daughter of Blelack Digger, and was sired by Harestone Hercules. Hercules’ excellent growth EBVs appear to have been inherited by Peru, who has shown consistently above-average growth across the board. Peru will be going to his new home at Southwick Farms in Southwick, Dumfries.

Next to sell at 5,000gns was GOLDIES PARKER, a sibling of Goldies Pilar. This 17 month-old was born to Goldies Jade, another daughter of the high-yielding Goldies Formidable. Like his brother, Parker was also sired by Tweeddale Matador, who has a proven record of producing progeny with both high calving ease and high performance. Parker will soon be beginning the long journey all the way up to Stromness, Orkney, to the farm of buyer W S L Muir. 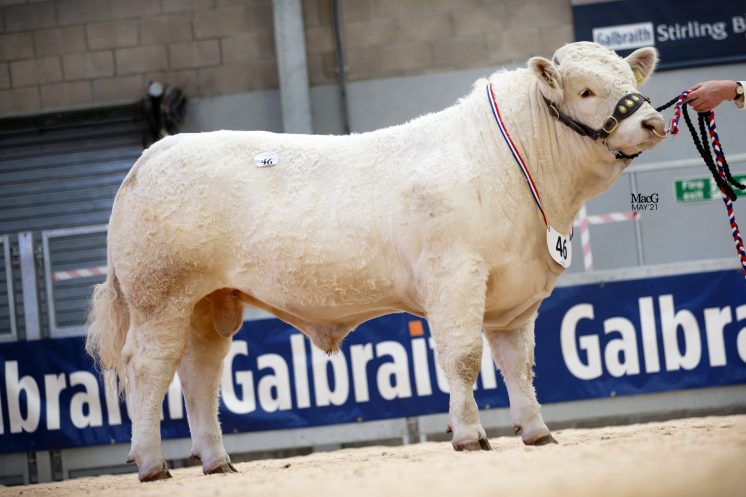 The final bull to sell for 5,000gns was BALTHAYOCK PATRICIAN, from the herd of Major D F W H & N R Parker of Balthayock, Perth. Patrician has a great deal of potential, showing consistently high growth rates, and carrying two copies of the sought-after F94L gene. He was sired by Balthayock Influence, and out of Balthayock Lizzy, a daughter of the 20,000gns Maerdy Grenadier. This promising young 16 month-old caught the attention of R & M Wilson, who will be taking him home to Dalry, Ayrshire.