High commercial interest in Charolais bulls at Stirling drove the average to £5,676 for the 33 bulls sold, up £274 on last year for six more sold, with a clearance rate of 79% and 20 lots making 5,000gns and above.

Society CEO Peter Phythian commented, “The commercial farmer has driven the trade here at Stirling today, opting for a Charolais bull to produce Charolais sired suckler calves which top the markets on weight for age”. 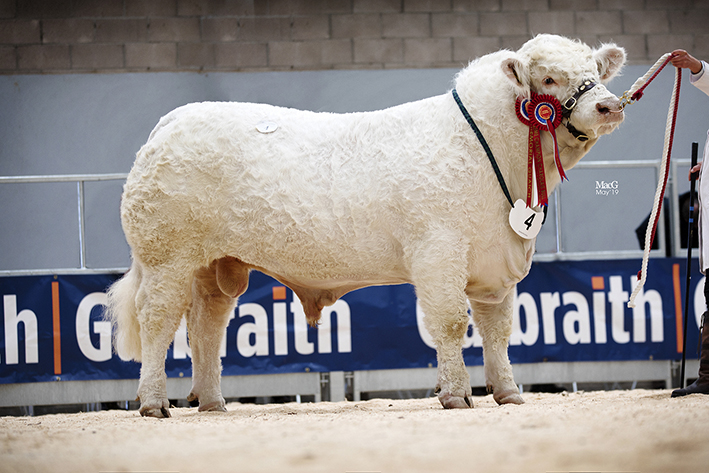 Topping the lots and following on from his success in the previous day’s show was the supreme champion Mccornick Nesquik who was purchased by T Howden and Sons, Balerno, Mid Lothian, for 8,500gns. The May 2017-born Nesquik, who is sired by Thrunton Hermes and out of Mccornick Glacier, who goes back to the Carlisle reserve junior champion Edenhurst Dynamo, was bred and exhibited by the McCornick family, Kirkcowan, Wigtownshire, who not only made the top price of the day with the champion, but were also awarded the reserve championship by pre-sale judge David Thornley. 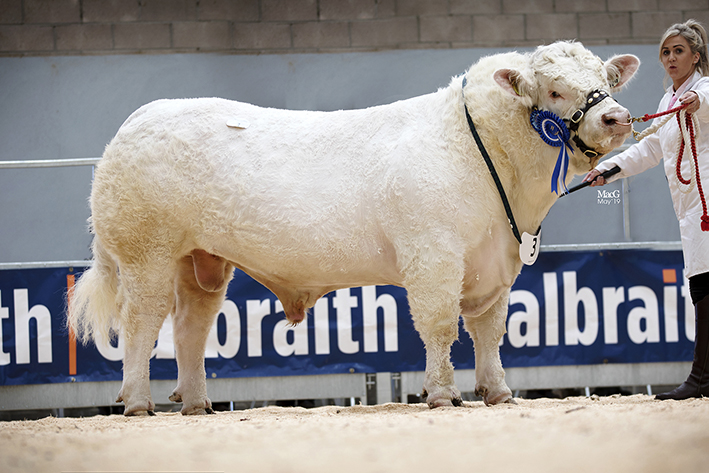 Their reserve champion was the previous lot and classmate Mccornick Newyork, another Hermes son, this time bred out Mccornick Hugsy, also a Dynamo daughter. He was knocked down at 6,500gns and found a new home in Thurso, Caithness, with RM Mackay and Sons.

The two bulls were shown by the McCornick sisters, 25 year-old Gemma and her 21 year-old sister Kate. Champion handler Gemma, a third generation Charolais breeder, who has worked full time on the farm since finishing her studies at Agricultural college in Edinburgh in 2015, has taken over the responsibility for the management of the pedigree sale bulls, both Charolais and Aberdeen Angus and was delighted with the day’s trading.

Alongside their small pedigree Charolais herd, the family also run 80 pedigree Aberdeen Angus cows, 450 breeding ewes and 30 head of commercial cattle, consisting Aberdeen Angus cross cows all served to a Charolais bull, the resulting progeny of which are sold as sucklers at Stirling in the Autumn.

The champion and reserve are the Mccornick family’s first Charolais bulls sold through a Society sale ring since May 2015 and their biggest Charolais success since they sold the 10,000gns Mccornick Fusion at Carlisle in November 2011, as most of their bulls are sold to local repeat customers from the farm gate. 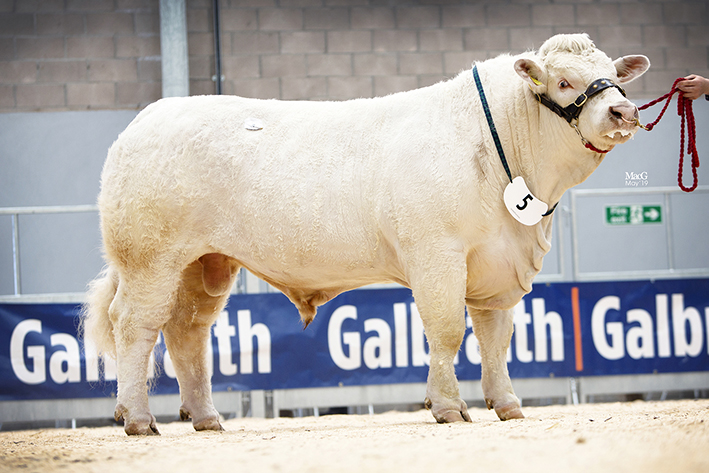 Following on at 8,000gns was the 23 month-old Thrunton Norseman. The homebred Thrunton Gladiator is the sire here, who has bred over 180 sons and daughters into the herd and Norseman’s dam Thrunton Ellie is sired by the 15,000gns Carlisle supreme champion Burradon Talisman. He caught the eye of Messrs Strain, Ballantrae, Ayrshire, and was the first of three high priced lots to pass through the ring for breeders and exhibitors JHC Campbell and Sons, Alnwick, Northumberland. 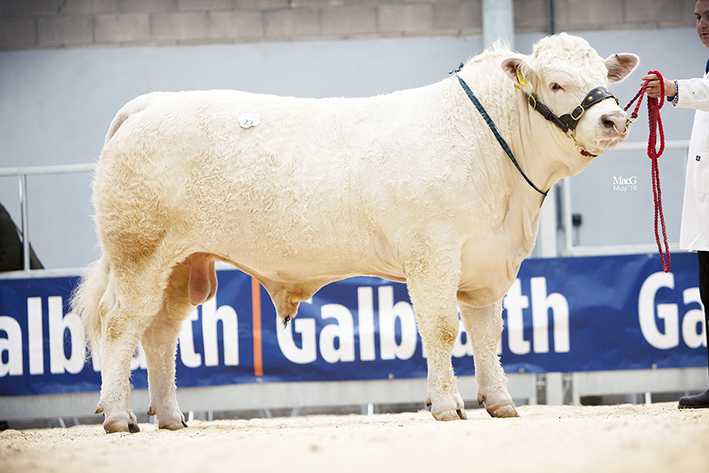 Next in the trade stakes for the Campbell’s at 6,500gns was Thrunton Nemo, an October 2017-born son of Thrunton Gladiator and Thrunton Francis, a 16,000gns Carlisle reserve intermediate champion Maerdy Cecil daughter who was purchased by Messrs Thomson, Kelty, Fife.

The Campbell family’s other high-priced lot sold just moments earlier for 6,000gns. The 19 month-old Thrunton Neapolitan, is a son of the 28,000gns Maerdy Jerusalem and the home-bred dam Thrunton Gretel who goes back to Thrunton Doubletop and took the fancy of RT Phaup and Partner, Cockburnspath, Berwickshire. 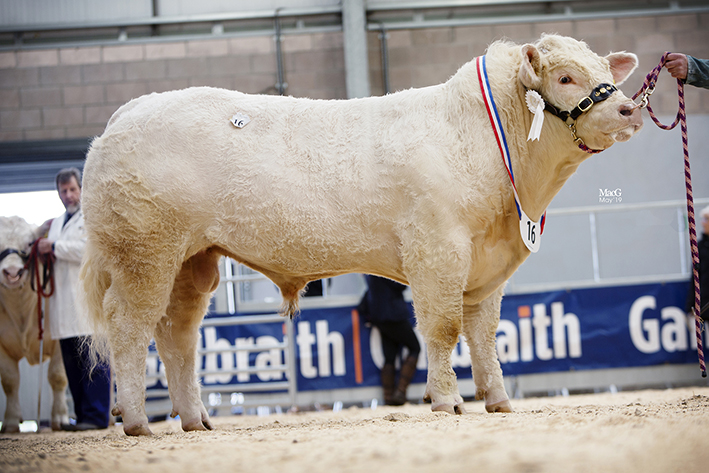 The first of three to be knocked down at 7,800gns was John Christie and Son’s Westcarse Nimrod from Stirling, Stirlingshire. Nimrod is by Mortimers Highlandfling and out of the Kersknowe Clansman-sired Westcarse Emily. In his first showing last year, the September 2017-born Nimrod was crowned senior and continental champion at the Stars of the Future show and James Moir takes him home to work in Keith, Banffshire. 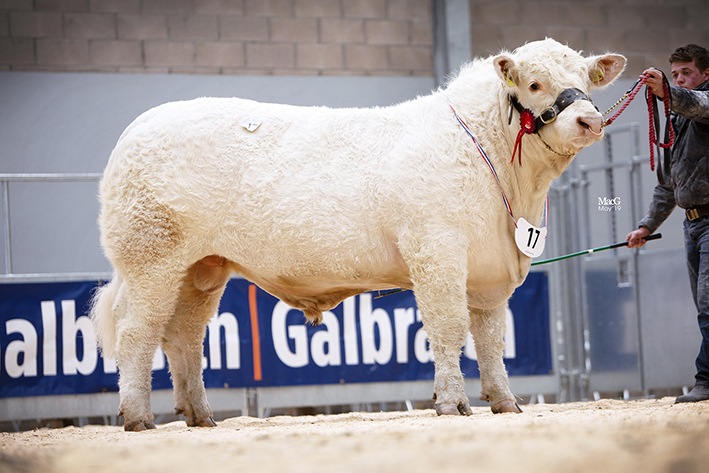 Matching the 7,800gns price tag and snapped up by the Scottish Government, Inverness, was Harestone Nelson, a 19 month-old class winner, sired by the Irish-born Knockmahon Ireland and out of Harestone Emmanuel going back to the Highland show supreme champion Harestone Ronsard. He was bred and exhibited by Neil Barclay, Insch, Aberdeenshire. 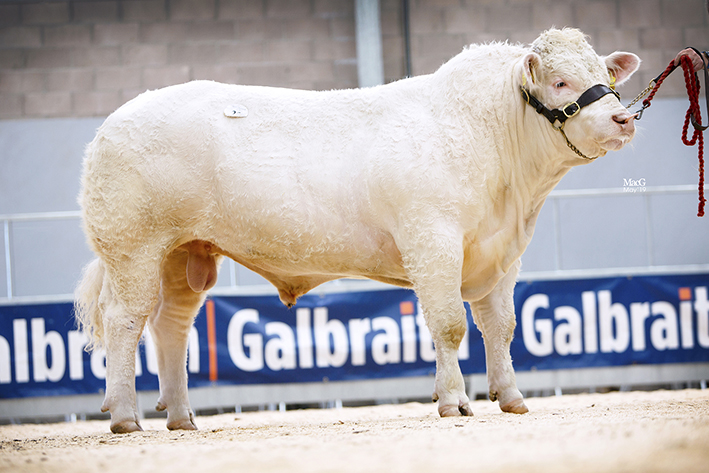 The other 7,800gns lot was Lochend Noelle, an October 2017-born son of the 8,000gns and popular AI bull, Blelack Blackberet and Lochend Jinglebell, who goes back to Mortimers Highlandfling. Noelle was purchased by W Young and Sons, Ochiltree, Ayrshire. His consigner Iain Millar, Port of Menteith, Stirlingshire, was another breeder having a lucrative day, going on to sell the youngest lot of the sale, the 15 month-old yellow ticket winner Lochend Orator for 7,200gns. Orator, who caught the eye of Messrs McCarlie, Harthill, Lanarkshire, is by Mortimers Highlandfling and out of Lochend Freedom, a Kersknowe Clansman daughter. 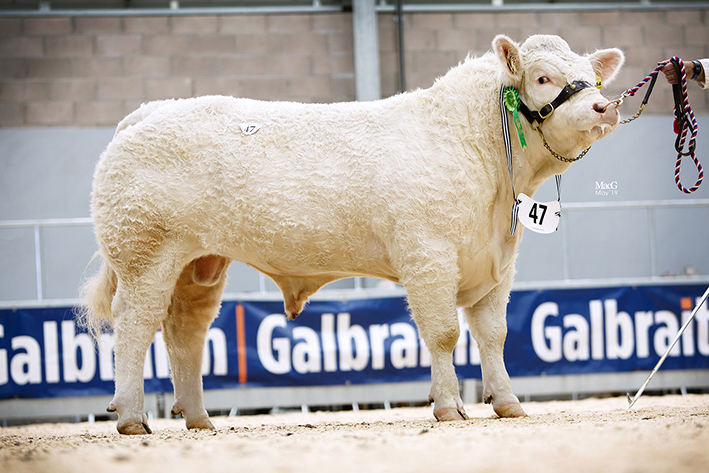 Selling at 7,500gns was an entry from Major David and Nick Walter, Balthayock, Perthshire. Balthayock Neville who placed third in his class at the pre-sale show is sired by the homebred Balthayock Influence and his dam Balthayock Frolick is a daughter of the 10,000gns Balmyle Churchill. The August 2017-born Neville goes on to work in Kilbirn, Ayrshire for TRC Logan. 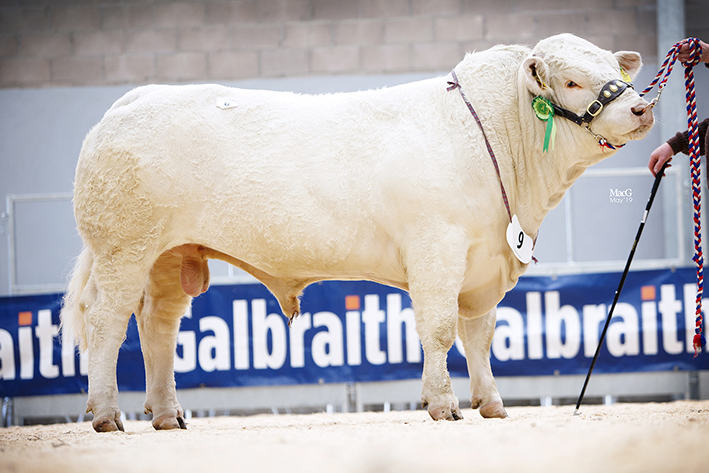 Next and the first of two to sell at 7,000gns was Kersknowe Neil from J Jeffrey, Kelson, Roxburgshire. G Wilson and Sons, Glenkindie, Aberdeenshire, were the last bidders standing on this 20-month-old son of the 16,000gns Burradon Insomniac and Kersknowe Hazel, a daughter of the 8,500gns Balnuith Carvalho.

Another class winner to bring 7,000gns when chapped down Glenkiln Farms, Crocketford, Dumfries-shire, was the blue ticket winner Inverlochy November. The Highland show champion Kilbline 1 Instigator son and November 2017-born November, was consigned by John and Raymond Irvine, Tomintoul, Banffshire and out of the 12,000gns Maerdy Eryr-sired Inverlochy Hyacinth. 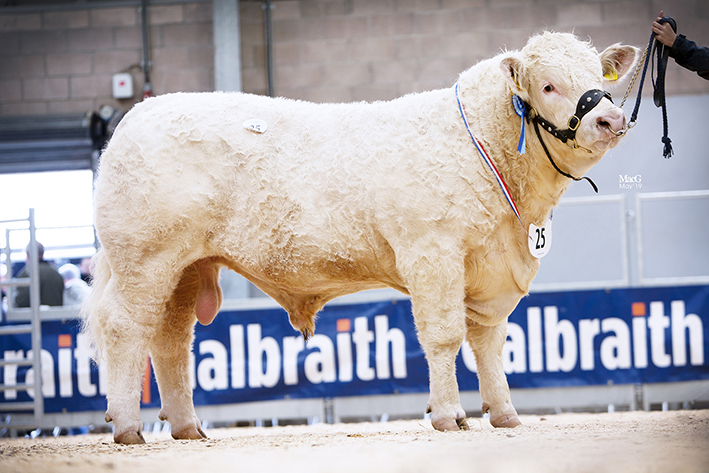 The class winner Overhill Nightrider was the next of the high-priced lots to sell. 6,500gns was the price that secured the 17 month-old Nightrider from exhibitor Richard McCulloch, Armadale, West Lothian. He is a son of the 25,000gns Stirling intermediate champion Inverlochy Ferdie and the Alwent Goldbar daughter Overhill Leska and Woodmill Farms, Dunshelt, Fife, were the purchasers. 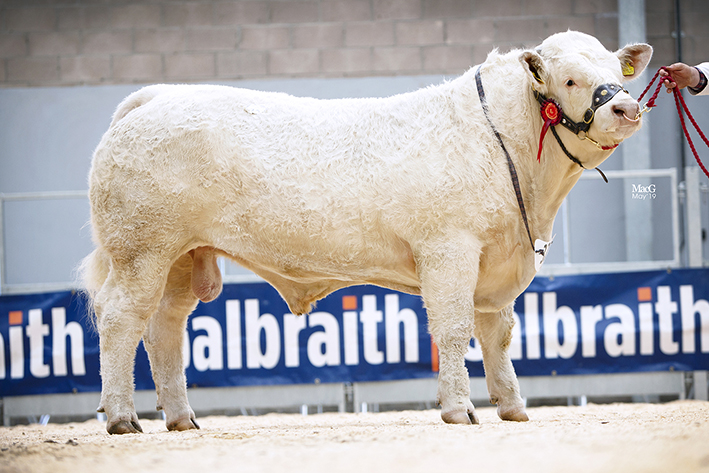 The other to secure a price tag of 6,000gns was Hamish Goldie’s Goldies Nelson from Ruthwell, Dumfries-shire, who caught the eye of Messrs Orr, Cleghorn, Lanarkshire. This November 2017-born bull is a son of Goldies Formidable, whose sons have sold to 26,000gns and the Blelack Blackberet daughter, Goldies Irene.