A small but high-quality offering of Charolais saw a solid trade at Dungannon on Monday 6 May where 11 bulls sold to a top price of 3,300gns and an average of £2,539.

The sale leader at 3,300gns was the blue ticket winner Killadeas Oriel from Stuart and David Bothwell, Ballina Mallard, Co Fermanagh. The 13 month-old Oriel is sired by Roughand Jaden, out of the home-bred Killadeas Letty who goes back to Gwenog Braveheart and was purchased by James Rice, Armagh, Co Armagh. 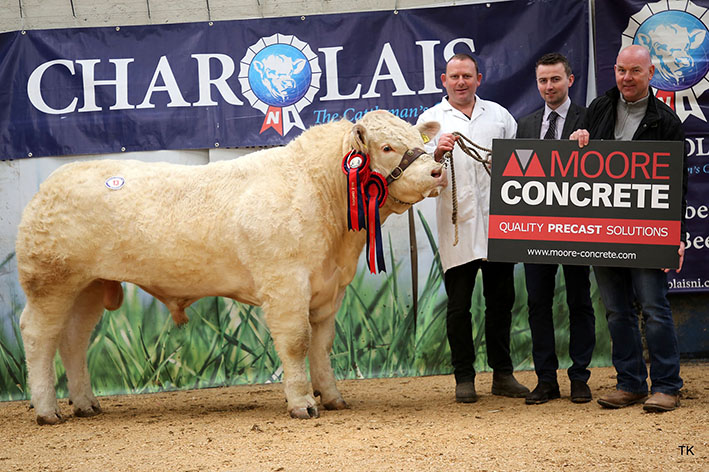 Mr F Lapin, Poyntzpass, Co Down, were the next to purchase, spending 3,000gns and taking home the supreme and male champion Fymore Olaf. Olaf is a January 2018-born son of the 18,000gns Perth intermediate champion Fury Action and Fymore Holly who is sired by the 38,000gns Perth reserve junior champion Goldies Champion and was bred and exhibited by Sean McCaughey, Augher, Co Tyrone.

Close behind and securing 2,800gns was Derryharney Oddball who took the fancy of Eric Robinson, Armagh, Co Armagh when he was tapped out second in his class at the pre-sale show. This 15 month-old entry from Harold Stubbs and Alan Burleigh, Crummy, Co Fermanagh, is sired by Dooley Lewis while his maternal grandsire is the 10,000gns Perth supreme champion Thrunton Bonjovi. 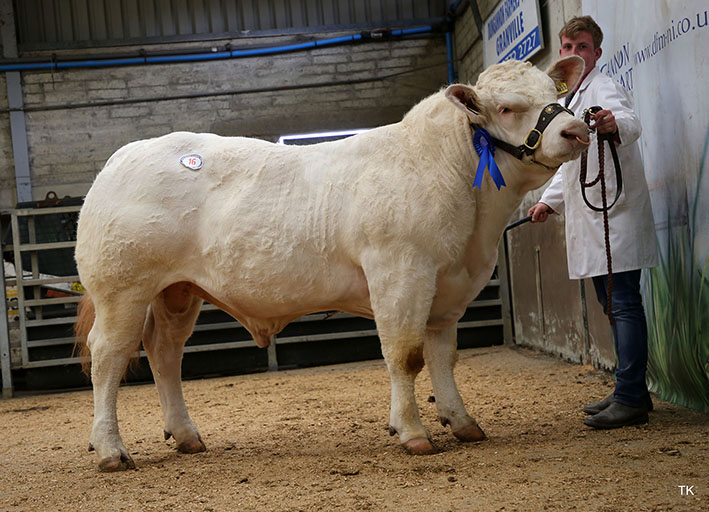 Next at 2,500gns was Mountjoy Nepal who was awarded a yellow ticket for breeder Caldwell McAskie, Tully, Co Tyrone. A son of the Royal Welsh show reserve male and junior champion Montgomery Ianto and the 13,000gns Perth junior champion Simpsons Gregg-sired Mountjoy Florrie, this September 2017-born lad travels on to work in Newtownhamilton, Co Down, with new owner Richard Bailie.

Heading up the female section at 2,400gns was the June 2017-born Killadeas Nuala. Sired by the proven high performing, short gestation and easy calving Blelack Digger and out of Killadeas Jean, who goes back to the 16,000gns Stirling supreme champion Blackford Dynamite, she was purchased by Phelim and Bronagh Caraher, Crossmaglen, and bred and exhibited by the aforementioned Stuart and David Bothwell.

The Bothwell’s carried on their success with the reserve female champion Killadeas Nanette, who was next in the trade stakes at 2,350gns. This time purchased by N McGrattan, Kircubbin, Co Down, the aforementioned Roughan Jaden was the sire and the Clogher show intermediate female champion Killadeas Gloria – a Blackford Dynamite daughter – the dam of this October 2017-born lass.

The final noteworthy entry of the sale came from Harold Stubbs and grandson Alan Burleigh. Picking up a yellow ticket earlier in the day, Derryharney Naughtygirl went on to secure 2,300gns when knocked down to Clare Ferris, Millisle, Co Down. The breeding here includes the 10,000gns Perth supreme champion Thrunton Bonjovi and Derryharney Hazel, a daughter of the 9,000gns Balmoral show supreme champion Goldies Carnival.