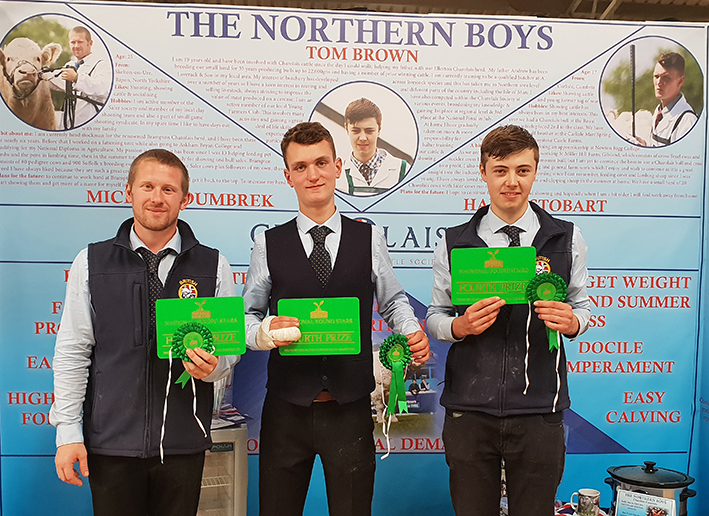 This year’s Charolais team, The Northern Boys – Micheal Dumbreck, Tom Brown and Harry Stobart, who were kindly jointly sponsored by Blyth’s Butchers, arrived at Malvern Three Counties Showground mid-morning, after their long trip down from Yorkshire ready to start work.

The oldest member of the team, 25 year old Michael is cattle stockman for the renowned Brampton herd in Skelton on Ure, Ripon, North Yorkshire, where he has been based for the past six years looking after Billy Turner’s 80 head Charolais herd. Under his watch the herd has enjoyed renewed success in the show ring and has produced the Yorkshire show junior champion Brampton Legoman and Brampton Nutella, a class winner at this year’s National. He has also established a small Saler herd of his own and in his spare time is a member of his local clay shooting team and also a part of small game shooting syndicate. His favourite part of the day though, is coming home to his partner Tiffany and their two children, Evie aged nine and six month old Freddie, who starting crawling while his Dad was on the way home from the competition. Prior to coming to Brampton, he worked on a fattening unit while studying at Askham Bryan College to qualify for his National Diploma in Agriculture. Speaking about his experience at the competition he said “it was a great learning curve, I wasn’t sure what to expect but the organisers, stewards and judges made us feel very welcome and at ease. At the social and throughout the days we had a chance to meet and mix with the other competitors from all the different disciplines; dairy, sheep, pigs and butchery and we’ve made loads of new friends”.

Tom who is 19 has been involved with Charolais cattle since the day he could walk, helping his father with their Ellerton Charolais herd and gradually taking on more of the responsibility for showing.  Andrew has been breeding their small herd for 35 years producing bulls selling up to 22,000gns and having a number of prize winning cattle including Ellerton Nessie who topped her class at the National Show this year. Tom is currently training to be a qualified butcher at A. Laverack & Son and his interest in butchery has developed because he has a keen interest in rearing and selling livestock, always striving to improve the value of meat produced on a carcase. He is also an active member of his local Young Farmers Club and particularly enjoys stock judging across all livestock species, which has taken him to Northern area level and different parts of the country including the Isle of Man. This year Tom competed at no less than three regional qualifiers, placing first in each and was 3rd in his age group at the National final in July.

The youngest member of the team was Harry Stobart, who was just two days shy of his 17th Birthday at the start of show. Another who has grown up in the Charolais world, Harry from just outside Carlisle, Cumbria, is an experienced showman for both his Dad and Grandad’s Scalehouses and Scotby herds as well as helping out other herds such as the Blyth’s Marwood herd at shows and sales. Harry’s entry at the Yorkshire show this year – Scotby Nightstar – secured a blue ticket in her class and his half-brother was sold at the Society’s Carlisle Spring sale for 5,000gns to Graystoke Castle Farms. He is completing his apprenticeship at Newton Rigg Collage and while on summer leave is working at St Miller Hill Farm, Gilsland, tending the cross Texel ewes and suckler cross cows. He also works on a dairy farm at the weekend. 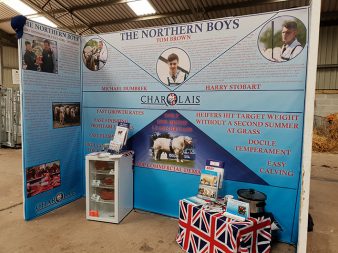 The first order of the day was to assemble the show stand as part of the competition is to design a stand and marketing materials to promote the team, the breed, the cattle and the promotional theme, which this year was “the future of British farming”. The lads put a lot of work into designing the banners, write ups and leaflets before the competition and the finished version looked great. Tom came up with the idea of displaying meat and doing a spot of cooking and the Blyth family of Marwood stepped up to provide the team with the Charolais beef for their display. There were quite a few offers to purchase the joints after the show but thankfully the boys managed to keep hold of it and as a result they all had a nice joint for their Sunday dinner! 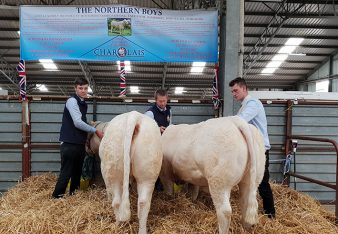 The next task was to settle the cattle in which were once again kindly provided by Mortimers Farms, who have bought cattle to the event for us for the past four years and travelled all the way from Hampshire. Charlie and Karen Maclean, whose sons Angus, Charlie and Donald won the competition last year, bought two lovely quiet heifers across, the April 2017-born Mortimers Nononsence and May 2017-born Mortimers Nimbus, who are both sired by the Royal Bath and West show class winner Mortimers Hurricane. 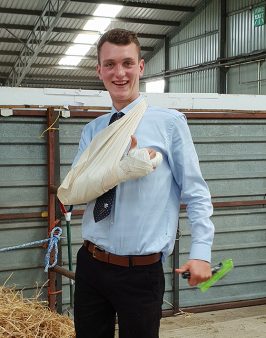 It was during the cattle prep that Harry was injured, and we had to make a trip to the local A&E for them to sew up his finger. Meanwhile Michael and Tom finished up the display and proceeded with the stockjudging and quiz with Tom giving reasons for the team. The day finished with a BBQ and social and luckily Harry made it back just in time for a medicinal drink before bed.

The second day of the competition was taken up with preparing the cattle for the show and despite his injury Harry helped as much as he could. We had a change of plan so that he would taking the interview later in the day as he wanted to do his bit towards the team score. 3pm soon came around and the lads, looking very dapper in their shirt and waistcoat combo, lead their cattle into the ring during which time Harry was interviewed over the mike. 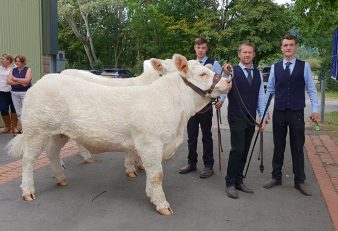 With the competition complete it was time for the presentations and we are proud to announce that the team came a respectable forth. In a change to the usual format, this year the organisers decided that it would not necessarily be the winning team that went forward to represent them in Canada, but instead they selected three of the individual competitors from the qualifying age group of 18-24 – which meant sadly Harry did not qualify. Michael and Tom however were chosen for the all-expenses paid trip of a lifetime and will leave for Canada to represent the National Show Stars and Charolais in November. 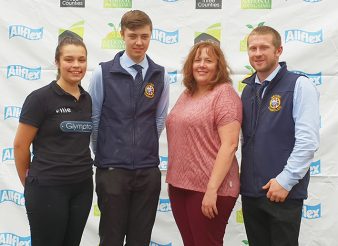 The team selected to go to Canada – Ellie from team Black as Night, Tom, Canadian host Karen Mansfield and Michael

Well done and thanks to Michael, Tom and Harry who were exemplary representatives of the Society and thanks to sponsors Blyth’s Butchers, Hartlepool for the meat display and Mortimers Farms for providing the heifers.