Despite huge uncertainty in the agricultural sector, beef farmers must start to make decisions now in order to protect their business in what is likely to be a more volatile future marketplace. 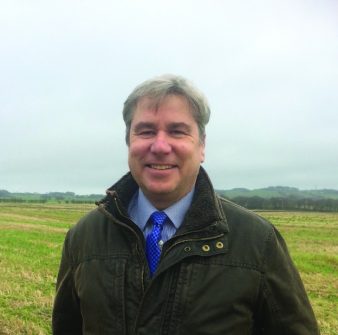 This was the message from Peter Phythian, chief executive of the British Charolais Society, speaking at this year’s National Beef Association’s Beef Expo which was held on Friday May 25 at Halls Shrewsbury Livestock Auction Centre.

“Its time to focus on what we know and can do constructively to ensure the beef industry remains viable and successful in the future,” he said.

“That requires a focus on efficiencies –and choosing the right genetics that will maximise returns.

“As an industry we need to embrace data collation, value the significant gains from using EBV’s, Genomics and fully understand the impact of different breeds on business profitability.

“We recognise this new approach to future beef production, and as a Society work with producers to develop new ways in which to improve their business. As an example, we recently announced a change in our DNA testing which we believe will lead to greater efficiencies and improved breeding.

“We need to work smarter not harder. The Beef Expo attracts many national and international visitors – from every level within the industry and, as farmers, we need to instil confidence in, and promote, our ability to produce world class beef.

“This will require farmers to illustrate their business knowledge and success – in turn requiring the use of recognised systems and information.

“Just as an example, in Northern Ireland (Greenmount College), the progeny of an elite bull (Top 1% for 400-day growth, muscle and beef value) was compared to a bull with average EBVs. On average, the cattle were 30kg deadweight heavier at slaughter, and took 74 days less to reach slaughter weights. With current prices, this difference is worth over £200.

“Over a typical herd, that’s a significant income – and easily achieved by selecting the best bulls.

“We also need to keep up to date with research and new developments, it has been proven by the upturn in store and finished prices across the country that Charolais crosses achieve better performance and higher financial returns– so consider this in your bull selection,” he added.

“This applies to dairy farmers, looking to gain extra income from beef calves. Charolais cross calves can be a much needed, and important, income stream into a dairy business. Many dairy farmers now recognise the ‘modern’ Charolais offers an easy calving option with a valuable calf, and we’re seeing considerable interest from this sector for current breeding programmes.

“We work with many other industry organisations to improve farm profitability. This is very much at the core of the Society and I strongly believe that the Charolais breed has a bright and successful future.”