A combination of pedigree and commercial interest saw a solid trade of Charolais bulls at the Royal Northern Agricultural Society Spring Show on Wednesday 28 February. Bidding peaked at 8,200gns and 11 lots sold to an average of £6,252, a massive £2,082 up on last year’s trade.

Topping the Charolais lots at 8,200gns, was C and E McCombie’s Auchincrieve Montreal from Huntly, Aberdeenshire, whose herd also saw the best average of the day at £7,070 with two more high priced lots finding new homes. Montreal, an April 2016-born son of Olrig Highwayman and the Sang-D’or-sired Auchincrieve Fiona, was purchased by E Innes and Son, Ballindalloch, Banffshire.

Commanding a 6,200gns bid from Haddo House, Ellon, Aberdeenshire, was the red-ticket-winner Auchincrieve Mclovin. This 21-month-old entry from the same home as Montreal is also sired by Olrig Highwayman, his dam is the 38,000gns Perth reserve junior champion Goldies Champion daughter Harviestoun Golddust.

The reserve champion Kinclune Marco from JA Wilson and Sons, Glenkindie, Aberdeenshire, was next in the trade stakes and the first of two to sell for 8,000gns. Sired by the 20,000gns Carlisle supreme champion Beechtree George and out of Kinclune Gemma, a Maerdy Boom daughter, the 22-month-old Marco stayed local when purchased by G Wilson and Son, Glenkindle, Aberdeenshire.

The Wilson’s, who sold a total of three to average £6,125 had another Beechtree George son in the money, this time out of the home-bred 20,000gns Perth supreme champion Thrunton Crownprince daughter Kinclune Gloriana. The July 2016-born Kinclune Montgomery attracted a 5,000gns bid from C Addison, Ellon, Aberdeenshire.

The second to be knocked down at 8,000gns, was the June 2016-born Tonley Mahez who had been awarded a yellow ticket earlier in the day at the pre-sale show, for breeders and exhibitors NA Wattie, Alford, Aberdeenshire. C Smith, Dunecht, Westhill, was the man with his hand in the air when the hammer came down on the Blelack Forbes-sired Mahez, bred out of the 15,000gns Goldies Dynamite daughter Blelack Glamourpuss.

Two bulls came under the hammer for 5,800gns with the first being the yellow ticket winner and March 2016-born Auchincrieve Maximus, consigned by the aforementioned C and E McCombie. He is no stranger to the show ring having been awarded second prize calf at Stars of the Future in November. Another by Olrig Highwayman and from Blelack Thelma who in turn is sired by the 15,000gns Maerdy Oxo, he was purchased by Firm of AAY, Thurso, Caithness.

The second call of 5,800gns was paid by M and I Steel, Banchory, Kincardineshire, for the 20-month-old Bonnykelly Mark, who was tapped out second in his class earlier in the day. Mark who is sired by the 10,000gns Carlisle reserve intermediate champion Gretnahouse Ivory and out of Bonnykelly Freda who goes back to the New Deer Show champion Newhouse Challanger, was bred and exhibited by R Leggat, New Pitsligo, Aberdeenshire.

The Steel’s were in a buying mood and snapped up another lot from Mr Leggat for 5,000gns, this time the class winning Bonnykelly Magnum. Magnum who was crowned champion at the New Deer show at just 13 months old, is a 20-month-old son of Kersknowe Clansman and Bonnykelly Fern, a daughter of New Deer Show champion Newhouse Challanger. 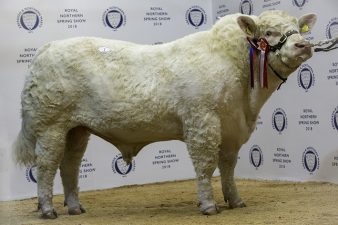 The third lot to cash in a 5000gns was the day’s champion from AN Reid, Hill of Logie, Aberdeenshire. Purchased by F and J Whyte, Inverurie, Aberdeenshire, Foundland Magistrate who boasts some top-class pedigree breeding behind him is sired by the 16,000gns Perth Junior Champion Clyth Diplomat, who has previously bred sons to 16,000gns. His dam line is no less impressive, out of Foundland Helen who has bred bulls to 7,500gns, her sire being the 26,000gns Maerdy Amontillado who has bred a Highland Show Champion and her grandsire is the 25,000gns Highland Show champion Maerdy Impeccable.