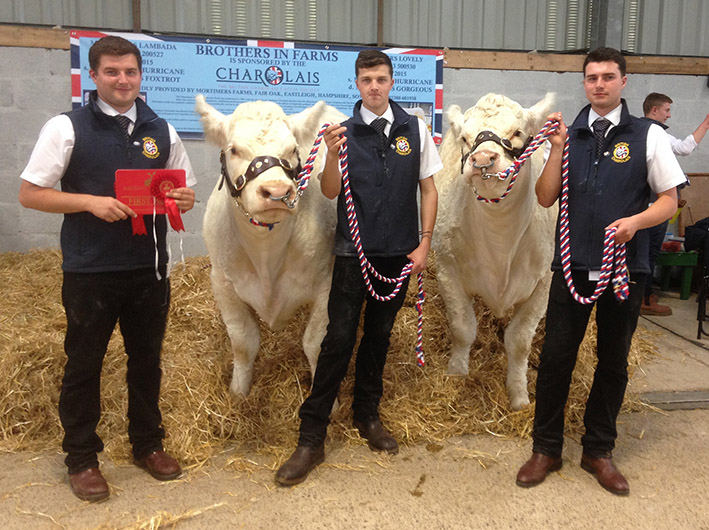 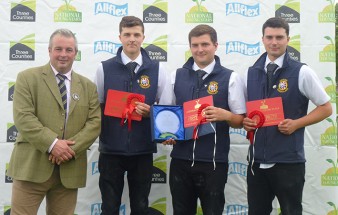 The Charolais ‘Brothers in Farms’ team consisting Angus, Charlie and Donald Maclean were crowned the beef champions and awarded overall best promotional stand at the National Young Stars competition at the Three Counties Showground, Malvern on Tuesday 22 and Wednesday 23 August.

The event features seven different disciplines which include dressing a display area for which competitors must prepare materials in advance and this year the organisers introduced a theme for each section. The beef teams were asked to demonstrate why beef is more than just a Sunday roast and to promote their breed, the wider beef industry and convince the general public why beef cattle are a vital part of the Great British countryside. 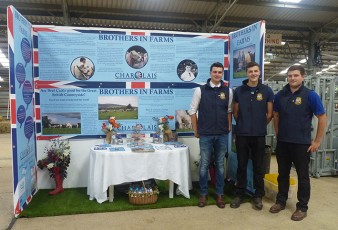 Our boys embraced the challenge and came up with a comprehensive range of display materials featuring recipe leaflet, a video and a poster campaign to demonstrate how the quick finishing Charolais makes less of an impact of the environment and as it is more efficient is more sustainable for the future. Angus commented that “I have been brought up with Charolais and have always admired the breed for their power, docility, growth and strength.  I see the Charolais Breed re-gaining its place in the beef sector in the future due to the demand to feed the nation. The breeds ability for growth and consistency at the abattoir will surely meet the demand required by the industry and more importantly the consumer”.

On arrival, the lads first job was to settle the cattle then assemble the display which also featured a guess the weight competition, lots of giveaways and information about themselves and their cattle.

The oldest of the brothers at 22 is Angus Maclean who currently works as a stock manager for a pedigree herd in Gilford and his duties include embryo transfer work, semen collection and preparing animals for export. Angus previously worked as stockman on the Isle of Wight after finishing his Level 3 Diploma in Agriculture at Sparsholt College.

Second brother Charlie is 21 and after studying for his A Levels, left home to join Stamford Park Farm in Oxford on an Agricultural Apprenticeship, attending Sparsholt college on a day release basis. For the past year he has been working in Cambridgeshire as stockman for a pedigree herd which involves daily pedigree stock work which runs alongside a very successful seed business and renewable energy initiatives.

Youngest brother, 18-year-old Donald studied Engineering at college, gaining a distinction and is now starting his second-year apprenticeship as a welder/fabricator with an agricultural engineering company local to the family home in Eastleigh, Hampshire, where day to day he can be found working on forage harvesters, mending gates or 30ft up in the air on a 4-million-pound aggregate site.

All three brothers have been brought up with Charolais cattle as Dad Charlie manages the Mortimers Herd who kindly provided the cattle for the competition – Mortimers Lambada and Lovely. The herd was established in 1983 and have regularly exhibited having had considerable success in all age groups at National and County Shows including Overall Supreme Championship at the Royal Highland, The Royal, South of England and The Royal Bath & West – to name just a few. Mortimers have achieved seven female champions at the Perth sales, five of whom were sired by homebred Mortimers Josh. Mortimers Urovision was Breed Champion at the last ever Royal Show in 2009 and her dam Mortimers Mirage and grand dam Mortimers Image were both show champions in their day.

Quality is favoured over quantity and the Mortimers’ breeding objective has been to produce quality females and bulls for pedigree herds and the commercial farmer – focusing on ease of calving, conformation, temperament, milk and growth rates. A high health and welfare policy is paramount and the herd is a member of the Premium Cattle Health Scheme, accredited BVD, IBR and Johnes and the farm is in a low risk 4 yearly TB Parish.

After setting up their stalls the competitors were welcomed by the event host Neil Lloyd and announcer Clive Davies, before the stockjudging competition began which is unique in the fact that there are six cattle in the class. 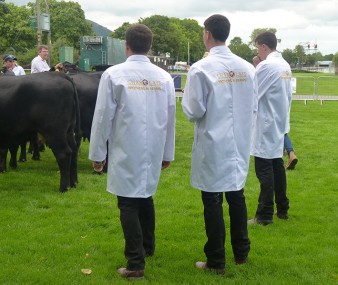 The three competitors each had to nominate the two that least fit the desired criteria which was breeding females for a commercial market, then place the remaining four in the traditional way. 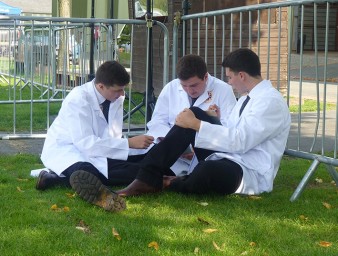 After the time was up the competitors were given a questionnaire to complete for the Skill-a-thon section of the competition while Charlie waited to be called to give his reasons.

After all the various stockjudging competitions had finished there was a BBQ and entertainment where the team joined in with the tug of war. 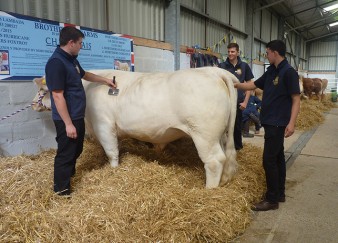 The team were up bright and early on Wednesday and after checking and feeding the cattle enjoyed a full English before they began the days first discipline which was to prepare the cattle for the show ring. The beef teams spent the morning washing and clipping their cattle and after a break for lunch finished soaping and combing to a fine finish. During this time the judges were moving through the lines and judging the competitors on their handling and preparation skills. 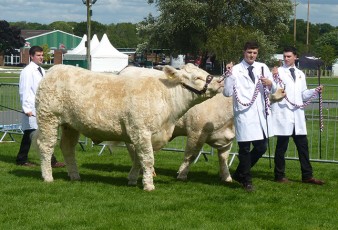 The team leads the cattle in the show ring

Once the cattle were ready it was time to exhibit them in the showring where Donald and Charlie led the cattle and Angus was called upon to answer questions on the breed and beef industry in general. The two heifers behaved impeccably under the team’s supervision and after all the competitors had been through the ring the teams relaxed and waited for the presentations of prizes.

The Butchery, Pig, Sheep and Dairy sections were all announced and then came time for the Beef results. We were delighted that the Brothers in Farms Charolais team were announced as overall beef champions with a total score of 866.5 out of 1000 and not only that, were awarded the prize for best promotional stand in show having only dropped one point in the presentation and promotional section. Congratulations to the beef section runners-up Team Canada and the Super Simmies and Limousin Leaders who placed third and fourth respectively.

The Society are extremely proud of Angus, Charlie and Donald who topped not only the promotional discipline but the ringcraft and stockjudging sections too and placed third in the interview. Thanks, must also go to their supportive mum and dad Karen and Charlie Maclean, to the event organisers and Ken and Charlie Piper from Mortimers Farm for providing the cattle.