With the demise of the Livestock Event at the NEC this year’s Charolais Youth stock judging national final was hosted the Society President Peter Donger and his family on Saturday 1 July.

Peter and his wife Sheelagh along with their family run the Seawell herd near Towcester, Northamptonshire and have been breeding Charolais for almost 40 years, registering 100 Charolais calves per year as well as using carefully selected Charolais bulls on a portion of their 250 strong Salers suckler herd. The farm covers 1,750 acres apart from the cattle produces wheat, barley, rape, peas and grass.

The Donger family were excellent hosts and not only did they provide a wonderful venue and four top class pens of cattle to be judged, but kept us well fed and watered with a fabulous roast beef dinner and plenty of liquid refreshment! The day also featured a talk by sponsor Harbro’s Christopher Barclay and Joanna Bailey from joint sponsor NSF was there to help present the prizes. 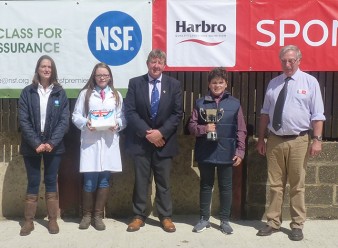 Master judge and former Society Chairman Andrew Hornall was delighted with the standard of cattle to be judged and as he welcomed the 42 finalists and their families congratulated them on qualifying at the regional competitions which were hosted across the country throughout May and June. “It is fantastic to see such an enthusiastic group of young people from all over the UK and not just from within the Charolais breed. As part of the Charolais Youth programme we welcome anyone aged eight to 26, with an interest in beef farming to come along to our regional qualifiers where you will have the chance not only to qualify for the nationals, but to learn more about stock handling, show preparation, health, nutrition, using EBV’s and how to select the best cattle for profit in today’s competitive beef industry.” 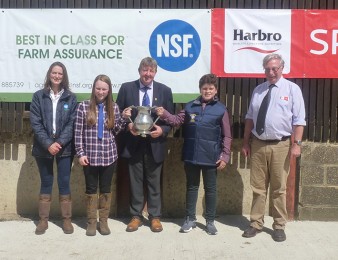 This year it was the Welsh region that came out on top when they secured the junior and senior titles as well as claiming first and second places in the team competition. For only the second time the Fairway trophy for the pairs championship was lifted by a junior team comprising 14 year olds Emma Morgan-Page from Church Stoke, Powys, and Ross Isaac, Meifod, Powys, who was also awarded the Cockerington Perpetual trophy for the Junior championship. The pair managed a combined score of 367 points from judging the four classes of Charolais cattle. The junior runner-up with a tally of 183, just six points shy of the winning score was the 14 year old Ellie Knox from Anglia. Ellie is no stranger to the competition and in partnership with sister Hannah claimed the Fairway Trophy in 2015 when she was just 12. 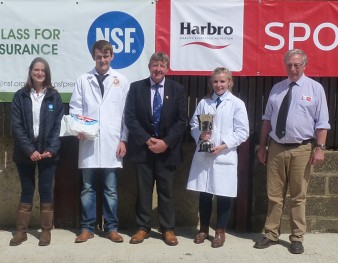 Taking top spot in the intermediate 15 to 18 year old section and winning the Alwent Perpetual Trophy with 189 points was the 15 year old Jane Lindsay who had travelled down from Bathgate, Scotland for the event. Matthew Mitchell, a 17 year old from Cookstown, Co Tyrone was the runner up with a score of 181. 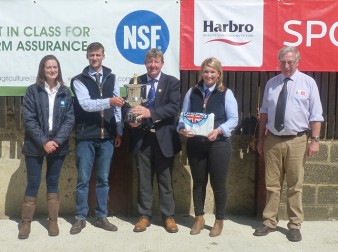 The competitors in the senior 19 to 26 year old section were required to give reasons in addition to judging the cattle which meant 250 points were up for grabs. Coming out on top with a score of 224 and claiming the Gretnahouse Pepetual Trophy was the 22 year old Joe Powell, in addition, Joe placed second in the pairs competition scoring a total of 350 points with his 15 year old team mate Cara Smith who also hails from Powys.

A delighted Joe who is currently spending a month in America has just finished his degree at Harper Adams University and on his return to the UK will be joining Welshpool Livestock Sales as a junior auctioneer. He also breeds his own Pedigree Charollais sheep and helps out on his parent’s dairy farm.

The second placed competitor in the senior section who also scored 224 but just missed out on reasons was another competitor from the Scottish region. Kirsty Morton, a 22 year old from Denny will join Joe on a trip to the Irish Ploughing Match in September as part of their prize.