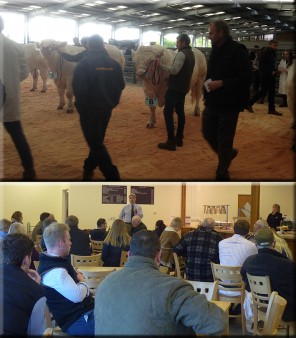 The stockjudging was scheduled for after the inspections and there was a nice turnout with competitors travelling from all over Wales and the Midlands. Regional secretary and youth coordinator Ruth Corbett had arranged for the stockjudging to be held in the show ring and the Welshpool market team were really accommodating staying on late so we could host the event. Steward Arwel Owen organised two lovely bull classes for judging and master judge Gareth Roberts must have made a good job of selecting his order as there were some great scores.

After the judging new Society CEO Peter Phythian gave a talk to crowd and the presentations were made to the winners and runners up in each age category followed by a catch-up in the bar! Congratulations to Emma Morgan-Page, Ross Isaac, Cara Smith, Joe Powell, Thomas Corbett and Grace Corbett who go forward to the National competition to represent the Welsh region and Oliver Robinson, George Hollinshead, Aimee Varga, Leah Emery, Huw Roberts and Rosie Boden who represented the Midlands. 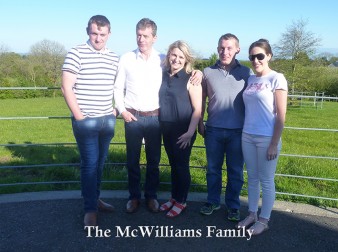 Northern Ireland
Just two weeks later it was the turn of the Northern Ireland region to host their qualifier. The McWilliams family were the hosts who went to town with the hospitality providing a hearty stew dinner and sandwiches and cakes to boot at their lovely home in Maghera, Co 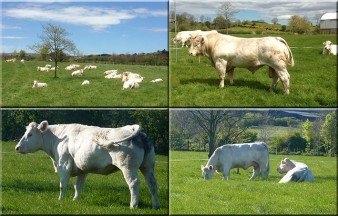 Derry. Robert McWilliams established their Charolais herd in 2003 and is now home to 12 breeding females. The herd has been successful at shows and society sales and his proudest Charolais moments include winning the senior and reserve male championship at Carlisle May 2012 with Stranagone Farren who went on to sell for 9,500gns and being crowned supreme Charolais champion at last year’s Balmoral Show with Stranagone Jones, who was male champion the previous year. 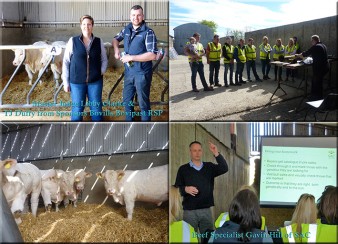 The cattle looked great in the sunshine and three classes were prepared for the competitors to judge. The day also featured presentations on health and safety in partnership with IOSH and the benefit of using EBVs with Gavin Hill of SAC. 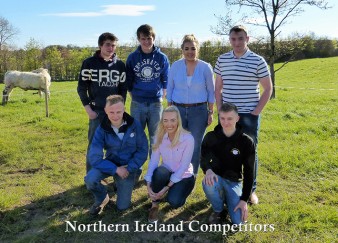 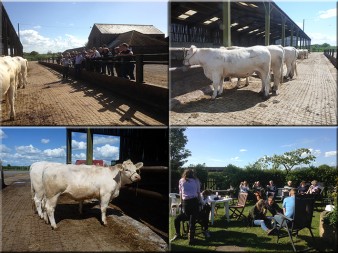 Yorkshire & North East
The Yorkshire & North East area was the next to hold their qualifier, which was held at the renowned Brampton herd of Billy and Sarah Turner in Ripon, North Yorkshire. Brampton is one of the longest established Charolais herds in the country being started back in 1972 and has gone from strength to strength with accolades including being awarded the Raymond Ogden Perpetual Trophy on its first outing in 1982, numerous Supreme Championships at the Perth bull sales and the Royal Show and most recently Brampton Legoman was crowned junior champion at last year’s Great Yorkshire Show. The Turners have also exported Charolais cattle all worldwide including consignments to Brazil, South Africa and Eire.

Stockman Antony and Michael had prepared three handsome classes of cattle and the Master Judge Steven Nesbit made his choices before the competitors took their turn. Club secretary Margaret Atkinson arranged the scoring and the presentations were made at Billy and daughter Sarah’s home in the village, where we were treated to a pork batch supper with plenty of cakes for afters. Making their way to the final on behalf of the region were Anthony Howe, Michael Dumbreck, Stuart Brown and Charlie, Sophie and Rebecca Hitchen.

Scotland
The Scottish regional Charolais Youth day was held on Sunday the 21st of May at Nethercarse Farm, Stirling by Kind permission of the Christie family at their Westcarse herd. The event kicked off a little later than planned due to road closures as the Stirling Marathon was taking place! We started off with the judging where we had four excellent classes and the master judge was John Macgregor, Allanfauld. Before the judging started John gave us a demonstration on a Charolais cow to allow everyone to know what he was looking for and then the youngsters had to give reasons on a class to demonstrate why they had placed as they had. 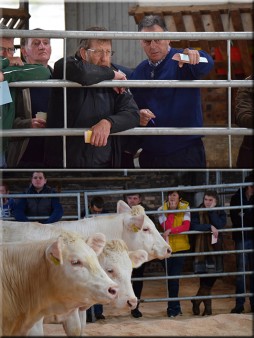 After judging there was plenty food to go around with burgers and sausages on the BBQ kindly donated by Andrew Hornall, Falleninch Farm Butchers and lots of lovely sweet treats baked by Diane Christie, what an excellent host Diane is!  While the reasons were ongoing Eleanor Legg, Forth Valley Vets gave a talk on buying a bull and why to choose Charolais which was followed by a showmanship demonstration by Robbie McNeil, after which the results of the judging were announced. Kirsty Morton won the senior section followed by James Graham, the intermediate section was won by Lyndsay Nelson followed by Jane Lindsay and winning the Juniors was Kerr Brooke followed by Anders Brown all of whom head off to the finals in July. Congratulations to all the finalists and good luck at Seawell Grounds.

The Westcarse herd of 30 pedigree Charolais cows calve in the Spring and Autumn ready to supply the sales at Stirling in February and October and Carlisle in May. The family who are members of the High Health herd scheme also have a flock of 60 pedigree Suffolk’s and 20 Texel sheep. Sale highlights include Christmas Cracker Champion & Reserve awards at Carlisle and the 14,000gns Westcarse Houdini who was sold at Carlisle in May 2013. Former President of the Suffolk Sheep Society John who will also join the Charolais Society Council in July is hoping for success at this year’s Highland Show where he will be showing Charolais cattle for the second time – the first being twenty-five years ago! 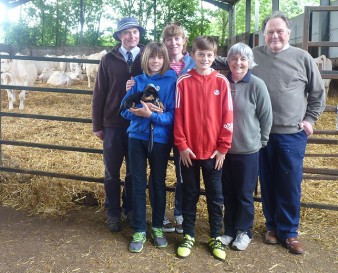 Anglia, South East & South West
On the final weekend in May it was the turn of the Anglia and Southern regions to hold their qualifier which took place in Aylesbury, Buckinghamshire as part of the Dorcas open day. We had a fantastic day and the Morris family made us feel very welcome with their excellent hospitality.

The day began with homemade cakes and hot drinks while Master Judge Rachel Wyllie explained what she would be looking for, then we headed over to the shed where the cattle were arranged to be judged while George and his stockmen moved them around the pens so that the competitors could get a good look at them. Once the judging had finished we headed back to the College Farm Lodge and were treated to lunch before presenting the prizes. Afterwards we were joined by more visitors for the open day which kicked off with James Dickson of ABP giving a talk on cattle grading before we loaded onto the trailers for a tour of the farm. What a treat it was to see so many Charolais out in the fields, especially the calves which were in abundance. After the tour we were shown the handing system before a hot drink and another cake to see us on our way home. 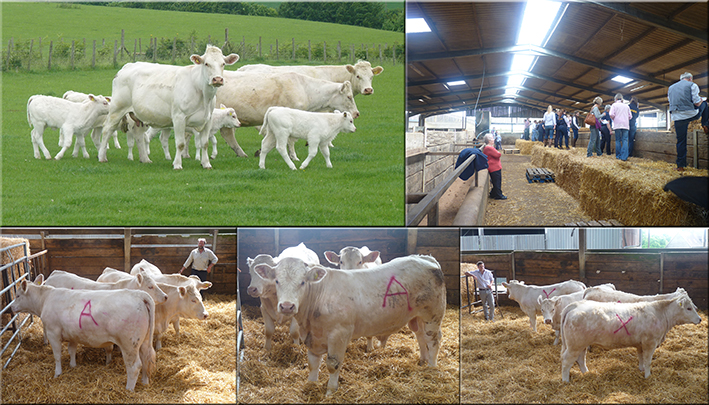 The Morris family’s Dorcas herd – which was founded in 1992 – consists of 300 pedigree Charolais cows run along strictly commercial lines giving the foundation of a simple and profitable farming business. 25 years of breeding has resulted in a very specific type of Dorcas cow – extremely milky, docile, easy calving, with great longevity yet heavy enough to still command a decent cull price at the end. The family also manage a flock of 1,200 Lleyn sheep and their 400 acre holding includes 60 acres of arable land, which is used to grow either maize or barley.

The farm is also home to The College Farm which offers schools and groups the opportunity to experience outdoor learning based around farming where visitors can meet the animals and learn more about the field to fork story. In 2013 the College Farm was awarded the Countryside Award in recognition of their promotion of rural education and preservation of the countryside, and in 2015 they won the BAYER/FACE School Partnership Award for their strong links with the local Primary School. 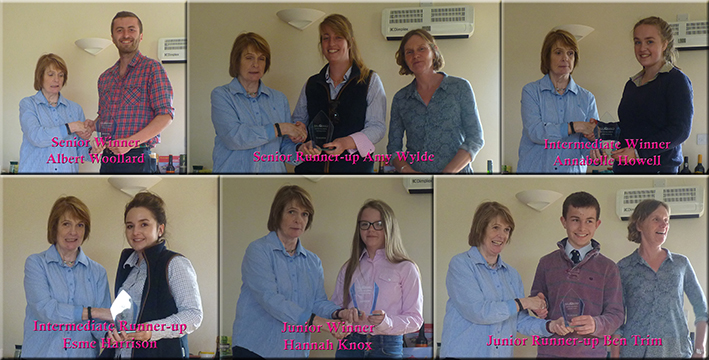 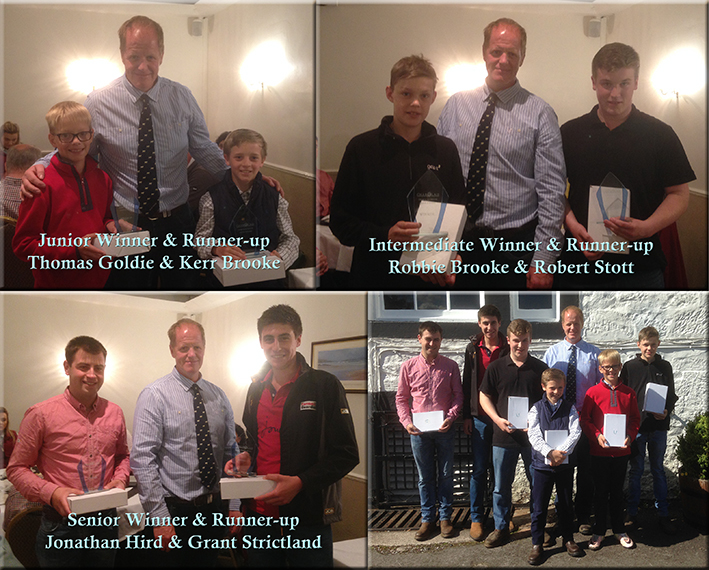 Borders
The final qualifier of the year took place on the first Sunday in June for the Border region and was kindly hosted by the Houston family at the Gretnahouse herd in Gretna Green, Dumfriesshire. The fine weather saw a great turn-out and there were plenty of entries to both the young breeders and open competitions which included the stockjudging, a guess the weight competition and raffle.

The Gretnahouse herd of Charolais cattle was established in 1967 and has been highly successful at sales and shows throughout the country over the years. Gretnahouse bulls who are always featured amongst the top prices of any Charolais sales they attend have twice sold to a top price of 25,000gns, most recently at the Stirling sale in February with Gretnahouse Lord.  The herd has also bred champions at the Perth and Carlisle sales including a Christmas Cracker champion and show successes include the interbreed championship at the Dumfries Show with Gretnahouse Emerald and the male championship at the Royal Show with Gretnahouse Archangel who has gone on to become a very successful AI sire.

The stockjudging took place on farm where Alasdair and Lucy Houston greeted us all with a drink and there were four handsome classes of cattle to be judged. Once all of the competitor’s cards were submitted Master judge Hamish Goldie talked us through his reasons which must have been agreeable to most with such high scores being achieved. Then we headed over to the Gretna Hall Hotel where the Houston’s laid on a delicious lunch and the prizes were presented. Congratulations to the six competitors who qualified for a place at the final in July: Thomas Goldie & Giles Raine for the juniors, Robbie Brooke & Robert Stott for the Intermediates and Jonathan Hird & Grant Strickland represented the senior section.