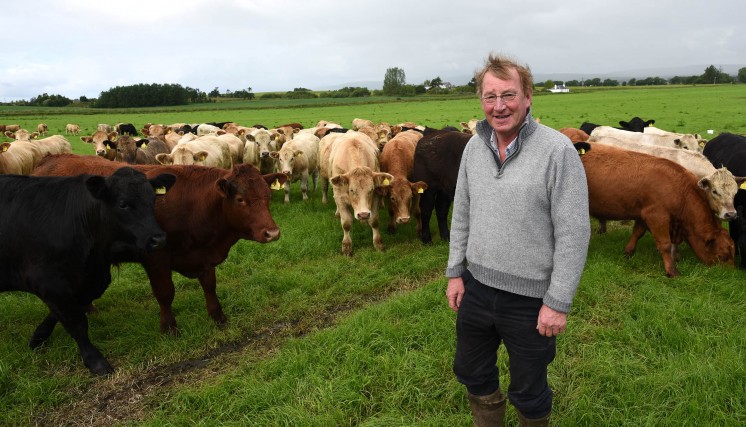 The suckler system at Wester Rarichie featuring Stabilisers and Charolais was recently highlighted when hosting a workshop entitled ‘Profitable Breeding for the Future’ by SRUC.

The event was held at Wester Rarichie, Fearn, Ross-shire in the Scottish Highlands where Stewart Whiteford of JM Whiteford & Co played host to over 80 interested farmers.

He admitted that getting cows to be profitable without BPS is hard work but he is heading in the right direction. The key to this he says is herd health, genetics and quality of feed.

With the aim of making the herd more easily managed, more cost-efficient and to utilise land that was not suitable for cropping, Mr Whiteford decided to ‘downsize’ from predominantly Belgian Blue cows 10 years ago and move to Stabilisers, which he considers to be the ideal suckler cow.

“The Stabiliser has proven dam lines, are not too heavy weight and you can get bigger calves out of these smaller cows.” he says. “The cows are very consistent and produce calves that are like peas in a pod, up to pens of 14.”

For his terminal sire, Mr Whiteford has been using Charolais for nearly 40 years which in his words is ‘the king of terminal sires’. He was firstly attracted by their fantastic length and has been buying his Charolais bulls from the same breeder since the early 1980’s, looking for bulls which are easily fleshed.

He has bought privately for quite a number of years now, preferring to see them naturally grown and ‘field ready’, not over pampered. Bulls are the only animals brought into the herd which is accredited for BVD.

The herd of 190 cows calve in the summer starting on June 1st and in this last calving, assistance was given to just six cows. Heifers are calved at two years of age. Cows are kept for 10 calvings with their first, second and last to the Stabiliser and Angus bulls to produce replacements which are now hefted to the farm.

After their second calving, they run with the Charolais for 12 weeks, being fed 1kg cobs/head/day over the bulling period from August until early October, followed by draff fed on the field for the following six weeks.

These cows in the herd which have run with Charolais bulls are out wintered on a hard standing area with a building for shelter, having come off grass in November according to weather conditions. They are fed on ad lib silage and have access to straw from the bedding in the shed.

The first and second calvers and the oldest cows are housed throughout the winter period.   The herd aims for a moderate size cow (under 700kg) and rearing percentage in 2015 was 95% which was helped by several sets of twins.

From a health point of view, Mr Whiteford prefers that stock is outdoor on grass wherever possible, rather than housed which also adds to the simplicity interwoven in his system.

“It’s a very simple system to run, taking one person 50 minutes to feed the cattle, dropping one round bale to every 20 cows.”

In September, calves are introduced to a creep ration of dark grains, barley and a mineral/vitamin supplement. They are weaned in March and sold through the live ring at Dingwall at 12 months of age, with 120 steers and heifers averaging 420kg and £1000 over the last two years.

He states that the high health status of the herd underpins its performance. He puts his money where his mouth is, giving his weaned calves a pre-sale treatment of respiratory vaccines and wormers plus an information package of sire, EBVs and feeding regimes.

Mr Whiteford works closely with his local vet on the herd health plan and says that the money he spends on vaccines is worth it. Stock is weighed, primarily for the purpose of ensuring correct dosage of vaccines. “My eye and the health programme is my guide to performance.”

Prices were down 20p/kg across the board in 2016 but with a tighter calving and better performance, weights were up an average of 20kg per head, a 5% increase.

Most of the calves are repeat purchases, with the majority of them finding homes in Aberdeenshire. “I don’t push the calves so it gives the finisher plenty of scope to finish them as they wish, fast or slow, feed intensively or graze them. The frame is there for them to work on.”

“You can see why the Charolais x heifer is becoming even more popular, with the ability to finish it at 400kg yet a good finisher will still be able to meet the weight targets with Charolais x bullocks.” 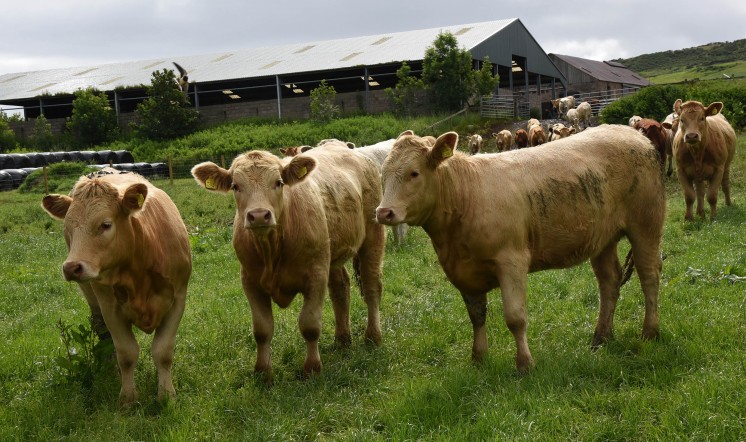