Charolais females sold to a packed ringside in Stirling on Tuesday 18 October at the breed’s official autumn sale. With the eagerly anticipated dispersal of the Massie family’s Blelack herd the main feature of the day. Bidding peaked at 30,000gns for a stock bull and forty-two sets of cow and calves averaged £4,895.

The star in the main section and selling for 6,000gns was the female champion Goldies Lulu ET exhibited by Hamish Goldie, Ruthwell, Dumfries-shire. The 18 month old is sired by the 12,000gns Goldies Elation whose first son was junior champion and sold for 15,000gns October 2013. Her home-bred dam Goldies Hippy goes back to the popular and renowned easy calving Blelack Digger and she travels home to Llandysul, Ceredigion with EW Davies. Judge Rob Adam, Glamis, Forfar commented “she was very correct, had a good back end and great character”. 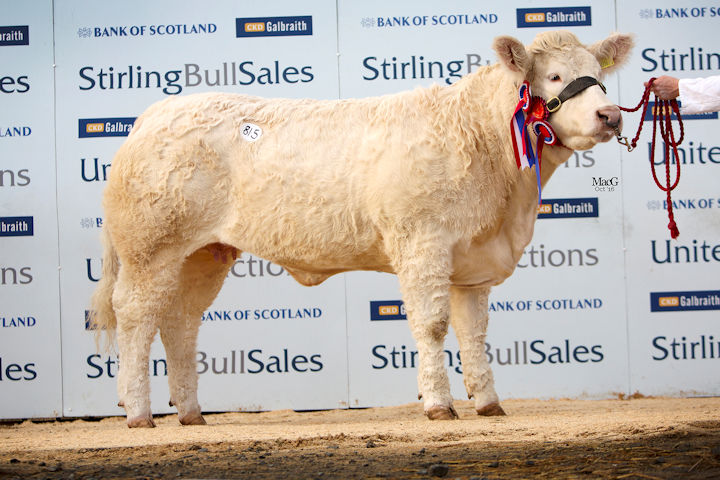 Mr Goldie carried on his success also securing the reserve championship with the December 2014-born Goldies Jessie out of another home-bred set – dam Goldies Uppity and sire Goldies Formidable who also sired the highest priced 26,000 and 23,000gns bulls at Stirling in February. She took the fancy of GC King, Lisnadill, Co Armagh who paid 3,800gns to take her home. 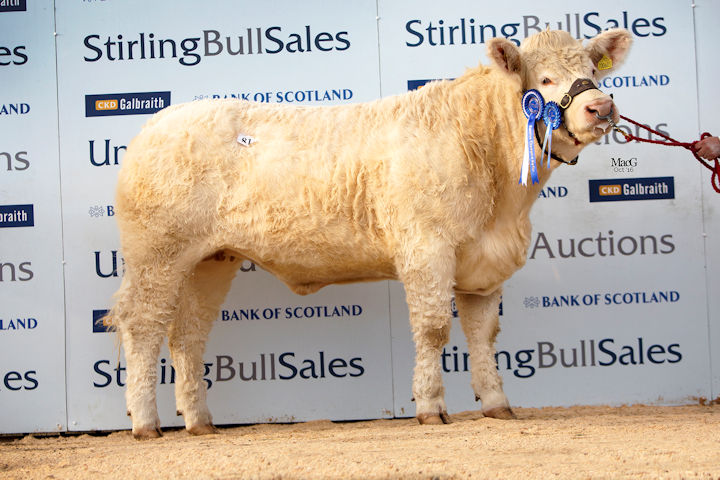 Completing the set Mr Goldie went on to sell Goldies Jenny a 23 month old also sired by Goldies Formidable, she was purchased by AJ Ewing, Annan, Dumfries-shire for 3,000gns.

The Main event of the day was the dispersal of Neil Massie’s Blelack herd. The herd was established in 1972 and has gone on to sell animals consistently well at sales throughout the years. 42 sets of cows and calves made up the majority of the section and sold to a top price of 10,800gns.

The top lot at 10,800gns was Blelack Harlot by the 10,000gns Balmyle Dingle and her six month old daughter Blelack Mayflower sired by Oakchurch Igor who sold later in the day. The pair was purchased by W and CS Robb, Mauchline, Ayrshire. Mr Robb also went on to purchase the top priced maiden heifer Blelack Lulu a 17 month old by Caylers Hustler for 5,000gns.

Next to sell at 10,200gns was Blelack Gorgeous and her five month old bull calf Blelack Mercedes. Ugie Dynamo daughter Gorgeous will be travelling over the water to Eire with M Phillips, Gurteen, Co Sligo while her son Mercedes sired by Caylers Hustler caught the eye of Smallburn Farms, Elgin Morayshire. 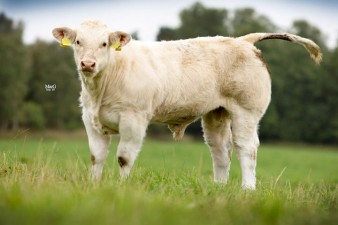 Blelack Harlot by the 10,000gns Balmyle Dingle and her six month old daughter Blelack Mayflower sired by Oakchurch Igor who sold later in the day secured the same price of 10,200gns this time staying together being purchased by W and CS Robb, Mauchline, Ayrshire. Mr Robb also went on to purchase the top priced maiden heifer Blelack Lulu a 17 month old by Caylers Hustler for 5,000gns.

Another pair going to separate homes and securing a total of 9,800gns were Blelack Isobel 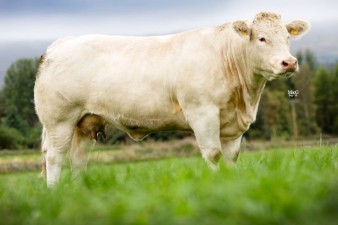 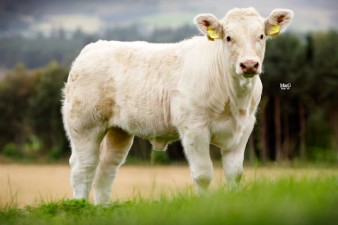 who sold to NA Wattie, Alford, Aberdeenshire is sired by Maerdy Henley who also went on to sell later in the day.

W Milne, Strathdon, Aberdeenshire was next to purchase a mother and son set at 8,600gns. Blelack Harriet a daughter of the 15,000gns Goldies Dynamite sold along with her five month old bull calf Blelack Mandarin 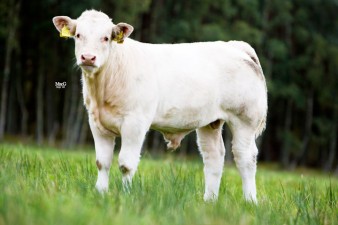 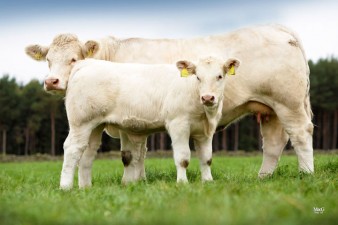 and her twin 6 month old heifer calves. India by the 11,000gns Maerdy Dublin and her daughters Blelack Mabel and Blelack Maddie sired by Maerdy Henley will stay in Scotland with JW Girvan, Kelso, Roburghshire.

Two pairs sold for 6,800gns and the first was purchased by JS Fraser, Muir of Ord, Ross-shire; Blelack Glenis 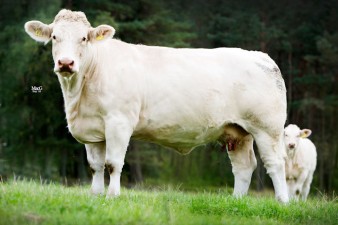 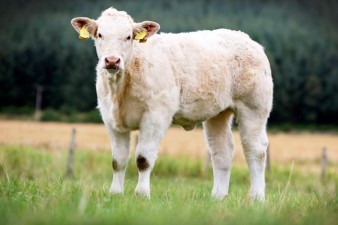 Another pair to bring 6,800gns when knocked down J Donnelly, Dromore, Co Tyrone was Blelack Emelia 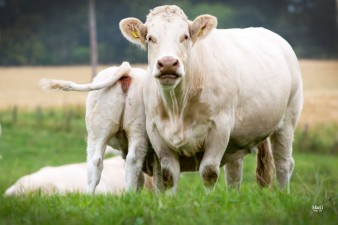 and her May born heifer calf Blelack Margo sired by Balthayock Bard and Oakchurch Igor respectively.

Just behind on 6,500gns was a cow bred by Alan Lawson. Alsnow Emulous by the 12,000gns Gwenog Banjo and her four month old bull calf Blelack Missouri 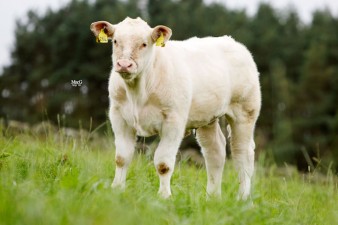 another son of Oakchurch Igor commanded an 11,000gns bid from C Smeaton and Son, Forfar, Angus.

Next along were the in-calf heifers all served by Maerdy Henley. Leading this section at 5,500gns and purchased by JM Wood, Penrith, Cumbria was Blelack Jane 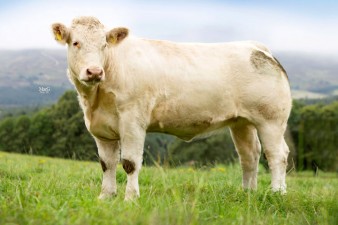 , a 28 month old by Goldies Dynamite. 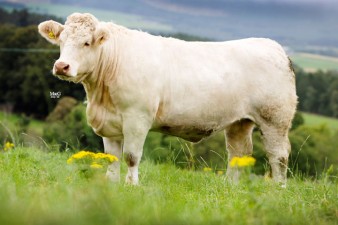 sired by the 26,000gns Balbithan Vespasian. This April 2014-born lass was knocked down to MR McCornick, Kirkcowan, Newtonstewart.

Two 29 month old heifers made 3,200gns; the first was the 10,000gns Vexour Garth daughter Blelack Joy who was purchased by Jannoch and Sons, South Leckaway, Forfar and matching the 3,200gns price tag and catching the eye of Messrs Thomas was Blelack Jenica 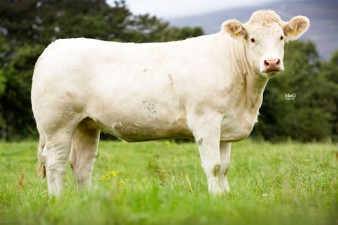 whose sire is Goldies Dynamite.

The maiden heifers also sold well and two lots sold for a price tag of 4,200gns. Blelack Leanne was the first – a March 2015-born daughter of Maerdy Henley she caught the eye of Messrs Wood.

The second to secure 4,200gns, this time snapped up by JM Wood, Penrith, Cumbria was the 16 month old Blelack Lara by Caylers Hustler.

The next two heifers were both also sired by Caylers Hustler. At 3,800gns the 16 month old Blelack Lemontree sold to JH Wilson, Newry, Co Down and the slightly older April 2015-born Blelack Laura 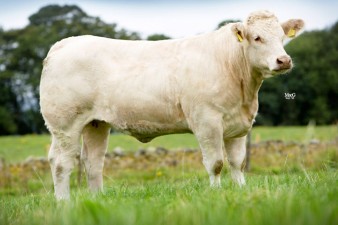 was purchased by WD Mundell and Son, Clovenfords, Galashiels for 3,500gns.

The youngest lone lot of the sale was Blelack Maisie ET an eight month old whose dam had sold prior to the sale. A daughter of Blelack Montgomery she commanded an impressive 4,000gns when purchased by WJ Lewis and Son, Brecon, Powys.

Three herd sires were sold by the Massie’s. The first and highest priced at 30,000gns was Oakchurch Igor bred by J and A Price, Staunton-on-Wye, Herefordshire. Igor is a January 2013 born bull whose breeding includes sire Goldies Eddy and dam Goldies Uptowngirl going back to the 20,000gns Perth reserve supreme champion Blelack Rustic. The man behind the money was Mr D Sawrij, Swalesmoor Farms, Galashiels, Selkirkshire.

Caylers Hustler was next along and will be travelling home to Wales with Gareth Jones, Abergele, Clwyd. 12,000gns was the price paid for this 4 year old Thrunton Dominator son bred by Caylers Charolais Nuthampstead, Hertfordshire.

Up next was the dispersal of the Guthire Herd of D and P Murray, By Forfar, Angus which was established in 1983. The lead lot was a mother and daughter pair selling for 4,400gns. Guthrie Dolly a Givendale Ulysse daughter and her ten month old calf Guthrie Lulu sired by Fallleninch Hamoraj sold separately. Lulu was purchased by JS Youngerson, Echt, Aberdeenshire and mother Dolly went home to Swadlingcote, Derbyshire with David Thornley.

Mr Thornley liked the look of the Murray’s animals and went on to purchase a cow and calf outfit at 3,400gns; Guthrie Iona by the Royal Highland Show champion Balmyle Eclipse and her four month old Hamzoraj sired daughter Guthrie Mistress.

Stock bull Falleninch Hamzoraj was the final lot in this section at 3,000gns. Bred by Andrew Hornall, Stirlingshire and sired by Begonia, this four year old is going home to work in Banchory, Aberdeenshire with JM Stewart.

The sale was completed by a small draft from the Elgin herd of RA Milne, Elgin, Morayshire and all four heifers found new homes. Topping the section at 3,800gns was Elgin Lily by the 14,000gns Westcarse Houdini, born in March 2015 she was purchased by Mr Reid.

Another daughter of Westcarse Houdini and out of Royal highland Show supreme champion Elgin Catherine was Elgin Lynsey who sold to J Wight and Sons, Biggar, Lanarkshire for 3,600gns.