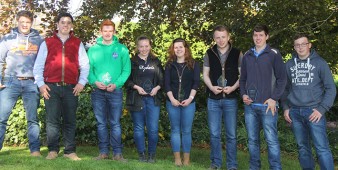 The Charolais Youth stockjudging qualifier for the North East & Central Region was held on Sunday 29th May at the Balthayock herd, Perth by kind permission of Major David Walter.

The competitors judged four classes of cattle and master judge Robert McNee, Finlarg, Dundee chose his preferred order. The senior winner was Abbie Anderson who was last year’s National winner and the runner up was Eoin Cumming, unfortunately the pair cannot make it to this year’s final so the region’s contingent will be made up from the intermediate section. Heading up the 15 to 18 year olds was Andrew Adam, with Mark Ogg as runner up, Fraser McEwan standing in third and in fourth place Lois Scott. James Adam and Edward Scott complete the team and will head down to the final at the National Charolais Show, NEC, Birmingham on the 6thJuly.

Major Walter’s Balthayock herd was founded in 1969 and has grown to over ninety pedigree Charolais cows and in calf heifers and 150 commercial cross bred suckler cows. Over the years the herd has gained many accolades and the bulls are regularly sold at the renowned Stirling bull sales. At the 2015 October sale the Walter’s were awarded the junior and reserve supreme championship and realised the top price of 50,000gns for the 17 month old Balthayock Justice who is sired by the homebred Balthayock Ferdinand. Justice whose performance figures place him in the top 1% of the breed is typical of the Balthayock cattle who are renowned for their impressive performance figures.