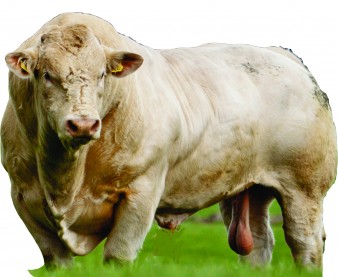 Charolais bred cattle are fit for purpose to meet the current deadweight slaughter specifications. They have the ability for efficient growth from birth to slaughter. The suckled calf producer (primary producer) must have a profitable enterprise to survive.

The way forward is to select the type of Charolais bull to suit particular suckler cows and the environment.

Below is an extract from an explanation  from ABRI of the use of indexes and estimated breeding values when making selection decisions “Bull buyers need to look beyond the number and consider the underlying information used to create the index and how the Index and EBVs should be used.

Indexes are based on information about the market and production systems as they are perceived at the time.  If any of the underlying assumptions change significantly, then the index may need to be re-evaluated.  It appears that the market signals have changed from “the heavier the carcase, the more money you received” to better defined live-wt/carcase-wt guidelines. + The BCCS terminal index is aimed at 18-22 months of age finishing for steers and heifers to a nominated carcase wt.  The carcase weights used are within current market optimum specifications. So the Indexes are still valid in that respect.  We are currently reviewing indexes as the carcase price grids have changed as well as the costs of production.  While these changes will make the index values higher, the correlation of the new index to the old index will be very high so animals will probably not re-rank much, if at all.

Because of different production systems, on-farm management, feed quantity and quality, etc, we cannot put a phenotype against an EBV or an Index (ie it is not possible to say a specific Index value gives the optimal carcase).   Rather, the Index and EBVs will allow you to breed animals that genetically fit the market.  On-farm management is then required to ensure the animals are bred and managed appropriately and then sold at optimum market specs and price. EBVs and Indexes were never meant to replace on-farm management expertise.
These types of considerations allow a re-focus on production systems, animal types and selection decisions. For example, mating times can be optimised  to maximise the use of low cost feed to get animals to market specs as cheaply as possible. Conversely, you can look at mating times to market animals when price is usually higher and potentially do it with younger animals (and less feeding).
That is, use the Index and EBVs to maximise profit rather than carcase weight or size of sirloin.   Use your on-farm management skills to maximise the profit you can realise from these genetically superior animals”.