Modern British Charolais were in demand selling to a top of 6,800gns at the breed society’s official sale in Welshpool on Friday 2 May. 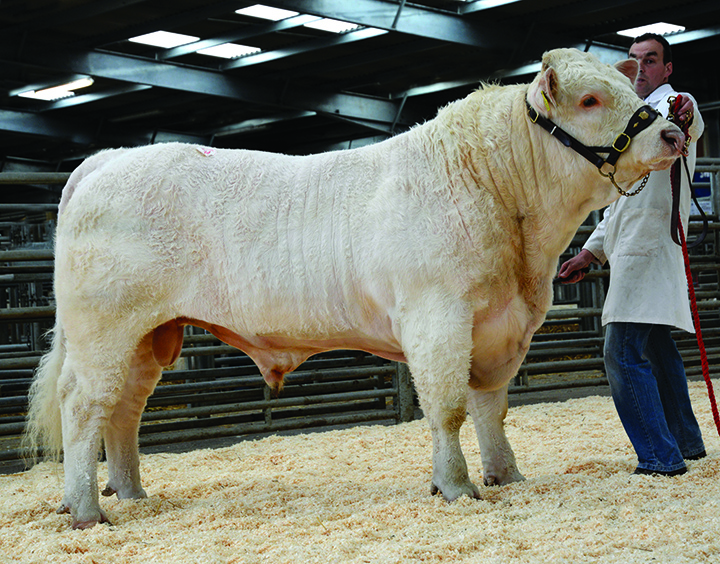 Sale leader at 6,800gns was Montgomery Harman a 19 month old by Blelack Digger and the highest performance recorded bull in the catalogue with a TI +76, SRI +66. Bred and exhibited by the Roberts and Jones partnership, Llangadfan, Welshpool he sold to join David Jones’ 60 cow suckler herd at Maesmawr, Welshpool. “This was a 50:50 decision made on figures – good calving ease plus growth rate EBVs plus he has the right looks,” said Mr Jones. “Store buyers are looking for Charolais crosses and are prepared to pay a premium; we intend to continue to deliver.” 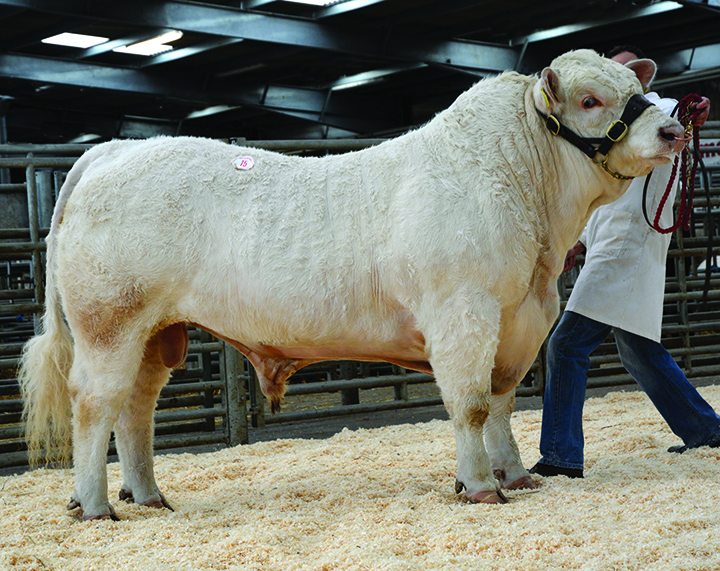 Earlier in the day, the 20 month old Montgomery Halifax TI +66, SRI +57, another Digger son from Roberts and Jones made 5,800gns to R Reynolds, Beguildy, Knighton. 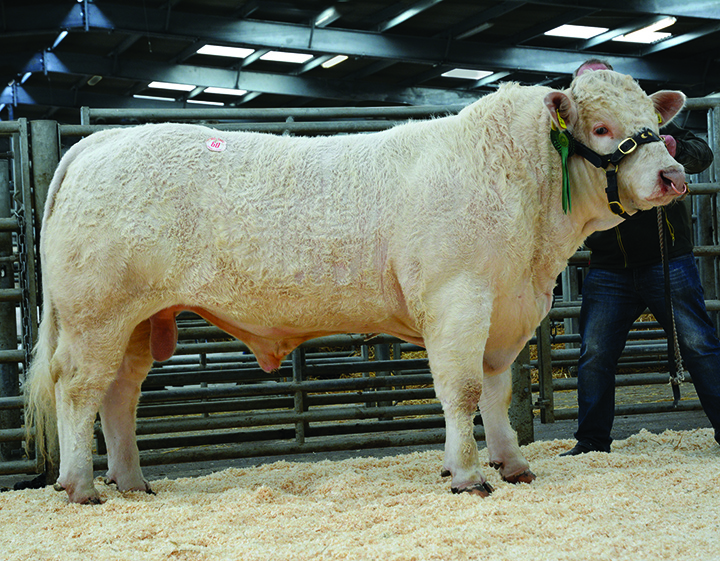 Next at 6,000gns was the 17 month old Trefaldwyn Horatio TI +64, SRI +59, another Blelack Digger son, this time bred and exhibited by Arwel Owen, Foel, Welshpool. He went to join James and Alec Cowan’s 100 cow suckler herd at Synodd Inn, Llandysul. “We selected Horatio for his combination of ease of calving and eye muscle area EBVs, as well as his good square loin as we start to gear up for the introduction of VIA carcase assessment,” said Mr Cowan. 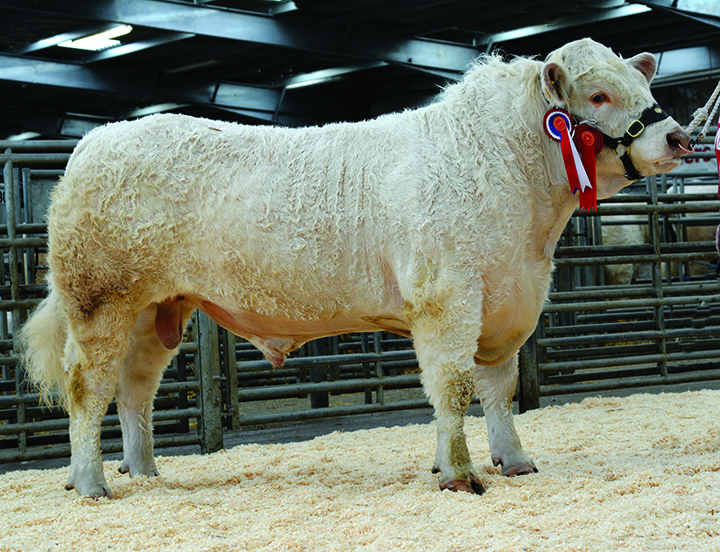 The day’s champion, Maerdy Hoelen TI +25, SRI +17 made 5,000gns to Aled Williams, Llangernyw, Abergele who was returning to Charolais after a decade of using other Continental terminal sires. “We need faster growth and more weight, and by reintroducing Charolais we hope to shave weeks off time to target finishing weight,” he said. Bred and exhibited by Flintshire vet, Esmor Evans, Mold, Hoelen was a 20 month old Maerdy Ulm son. 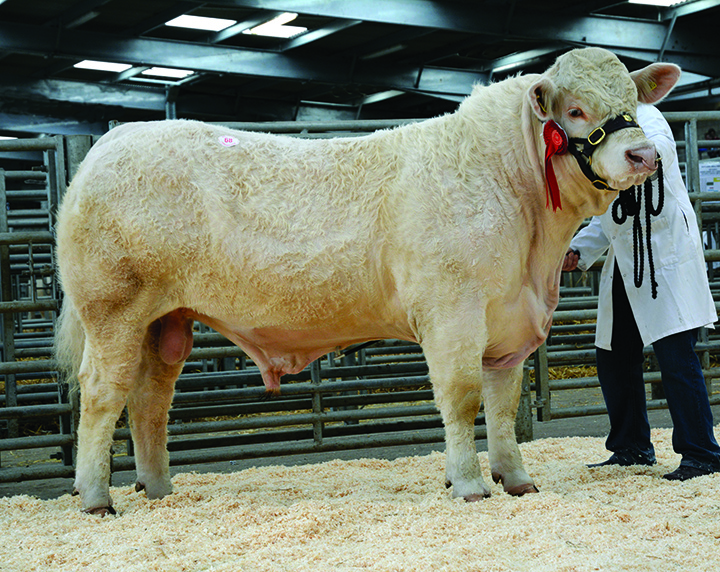 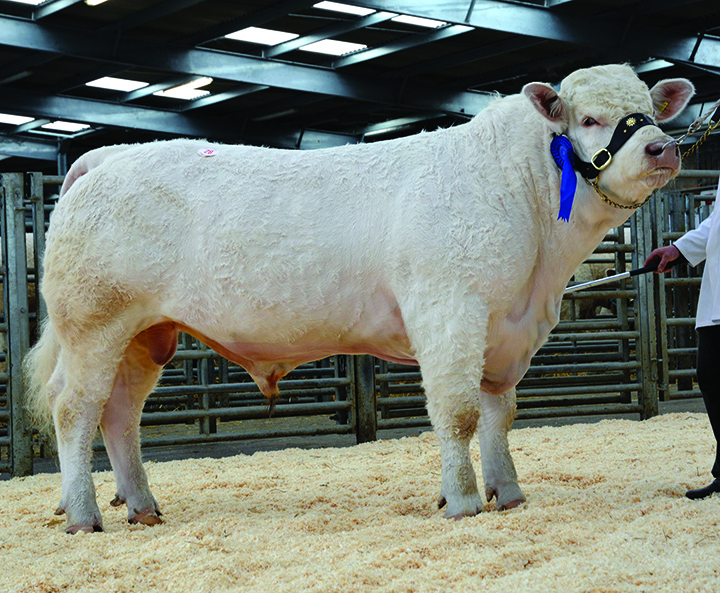 John Williams, Caersws, offered his 20 month old Trannon Harold, by Wesley Evolution for 4,600gns to WJ Lewis, Pennant, Llanon. Next at 4,400gns was Hendy Isaac, a 16 month old by Pinay from the Rees family, Llangurig, Llanidloes to DI Hughes, Aberhosan, Machynlleth, whilst a bid of 4,200gns was made by R Vaughan-Jones, Tywyn for Cargriff Houston, an 18 month old Blelack Digger son from Griff Morris, Llanstephen, Carmarthen. 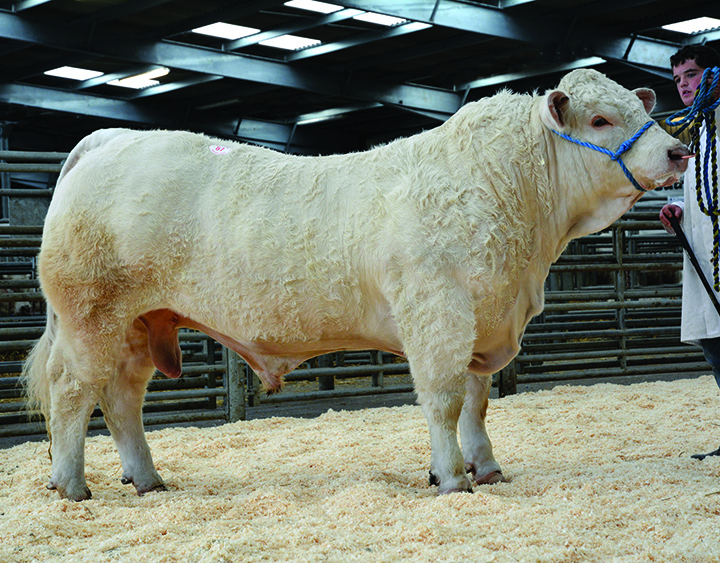