British Charolais bulls met a flying trade from a packed ringside in Welshpool on Thursday 7 November at the breed society’s autumn sale where prices peaked at 9,800gns and 77 entries sold through the ring to achieve a new beef breed centre record average of £4,080 with 79% clearance. The seven hour sale which grossed £0.54 million included three herd drafts and the Trefonnen dispersal.

“An electric atmosphere prevailed throughout as bull after bull went through the ring sold to commercial men who were aware of the rewards for Charolais cross store and suckled calves at the autumn sales and it clearly reflected the momentum towards returning to modern Charolais as the herd’s terminal sire,” commented the society’s David Benson. 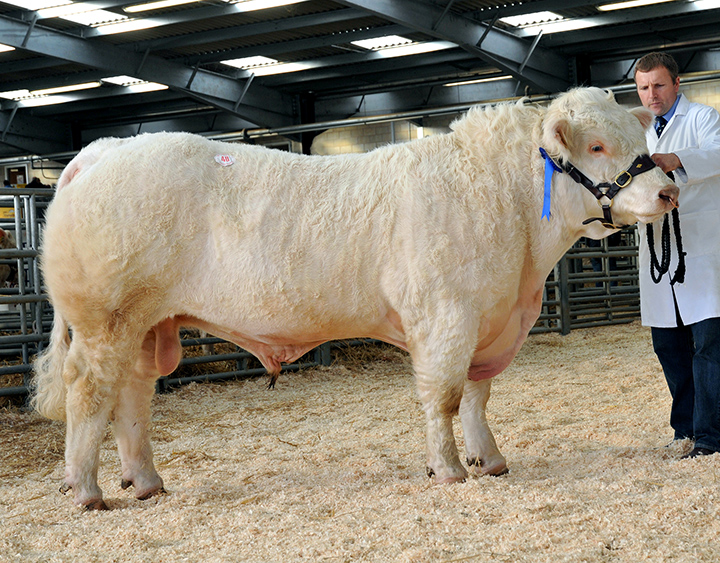 Sale leader at 9,800gns was Caylers Hugo TI +45, SRI +45, a 20 month old Thrunton Alpha son and out of a Balthayock Marius sired homebred dam from David and Louise Barker’s 30 cow herd based at Nuthampstead, Royston. Hugo went to join Allan Currie’s 180 suckler cow herd based near Ayr. Mr Currie is a repeat bull buyer from the Caylers herd and said Hugo is a genuine, very well balanced with length, strength and good locomotion.” 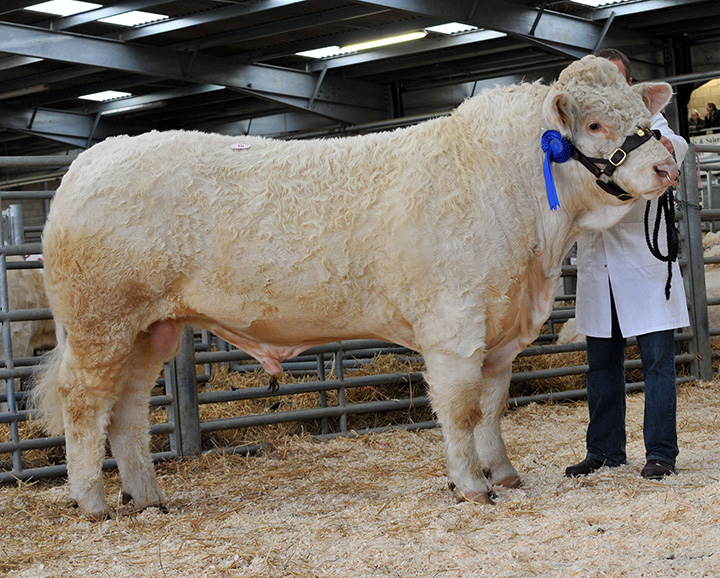 The Barkers were enjoying their best ever day in four years of trading at Welshpool and making the eight hour return journey with their three entries. Earlier in the day, they secured 6,000gns for Caylers Hawthorn TI +40, SRI +28, a 21 month old by their former stock bull, the 10,000gns Thrunton Dominator and out of a homebred heifer by Maerdy Uniroyal. The buyer was Messrs Heard, Okehampton, Devon. The Barkers final entry at 4,800gns was Caylers Hectors TI +54, SRI +48, a 19 month old first prize winner by Dominator selling to P Weston, Ashbourne. 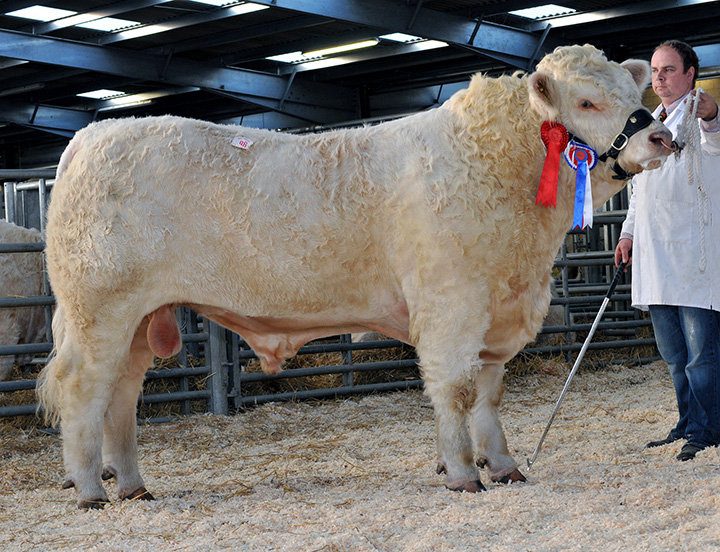 The day’s second highest 9,000gns call went to the reserve junior champion, Maerdy Hughos TI +45, SRI +43, a 17 month old by the 13,000gns Kelton Trident and out of a homebred dam by Maerdy Padirac. Sold to B Walters, Dryslwyn, Carmarthen, he was one of 12 entries to come under the hammer sold from Flintshire vet, Esmor Evans, Mold. 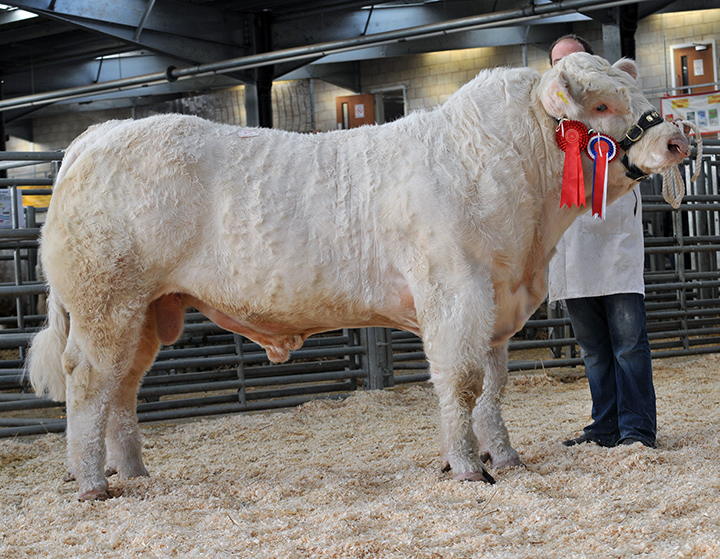 Mr Evans was again in the prizes when his 18 month old Maerdy Holster TI +53, SRI +46, secured the intermediate championship before selling for 8,000gns to EI Lewis and Sons, Forge, Machynlleth. Another Trident son, he was out of a homebred dam by Maerdy Alcazar. 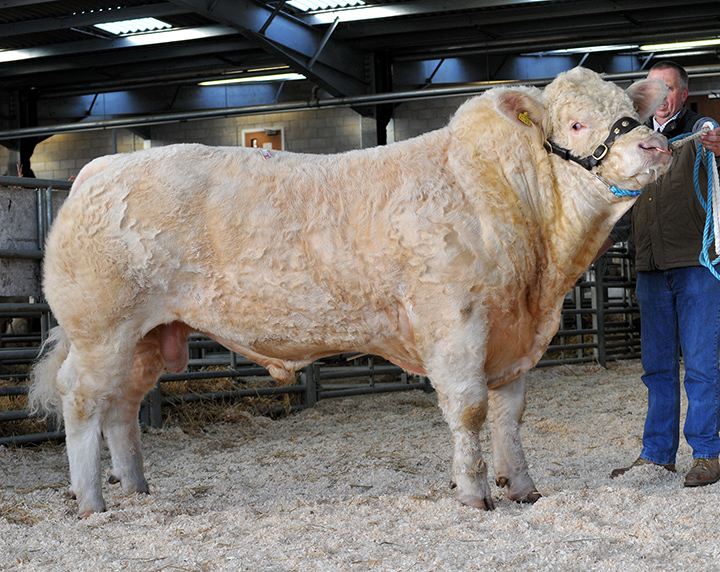 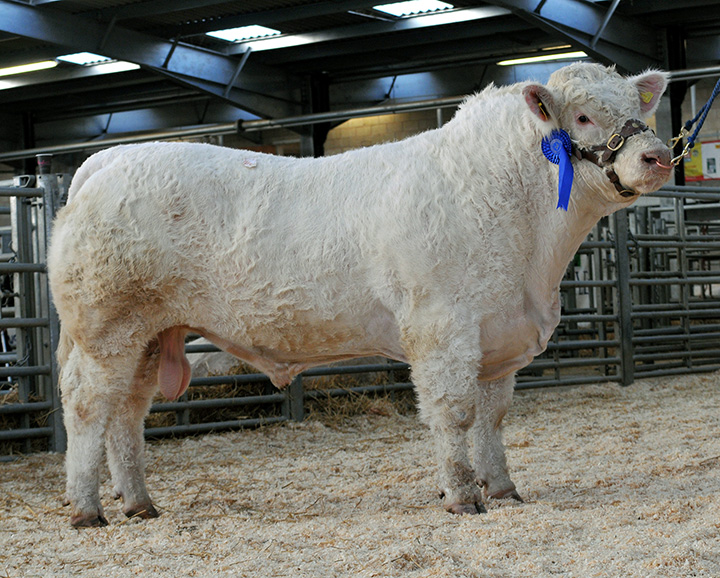 The final 8,000gns call was made by GR Davies, Cwmtirmynach, Bala for Pedr Hermit TI +41, SRI +44, a 16 month old by the 12,000gns Thrunton Classic and out of a homebred dam by Derryharney Outstanding from father and son team, John and Peter Howells, Llanwenog, Llanybyther. 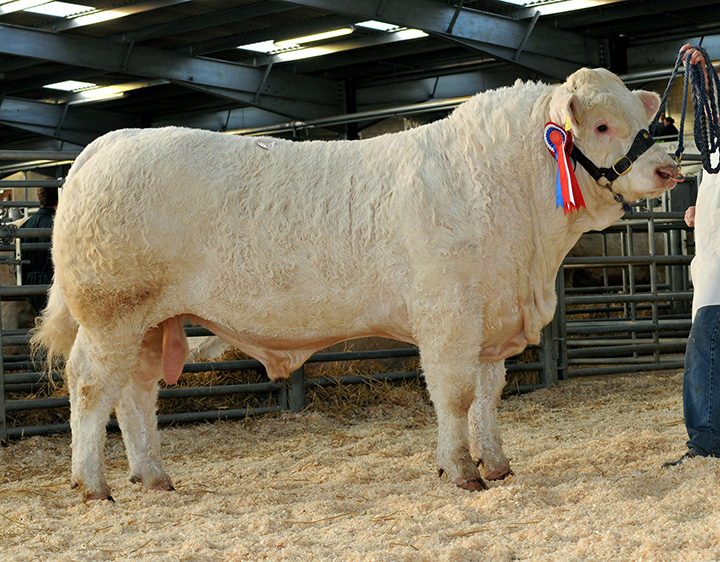 At 6,800gns the Howells offered their junior champion Gwenog Hogan TI +47, SRI +46 another 16 month old Classic son and out of a homebred dam by Blelack Tycoon. The buyer was EM Gittins, Menai Bridge, Anglesey. 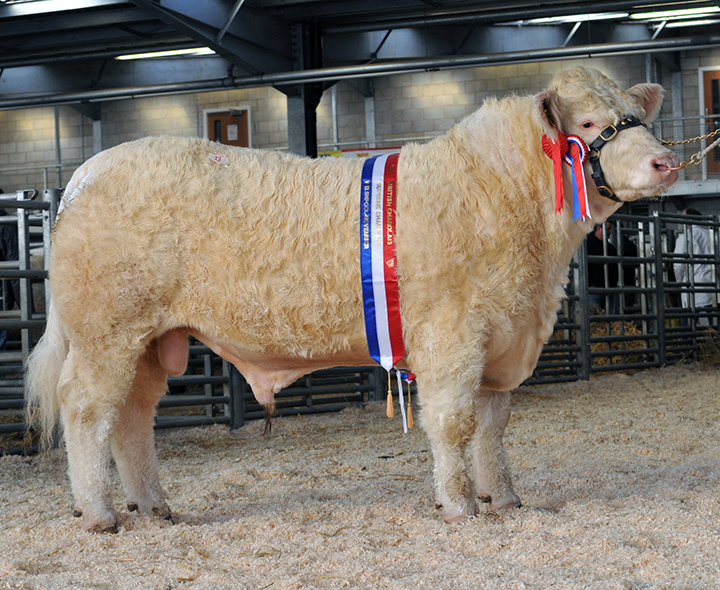 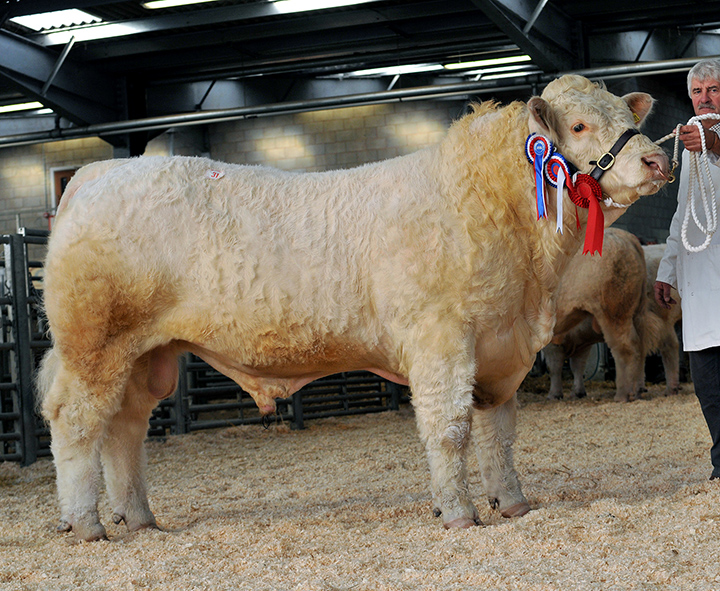 Three more entries commanded a 6,000gns price tag. First in the ring was Trefaldwyn Hilton TI +36, SRI +32, a 21 month old Brampton Nacodar son and out of a homebred dam by the 25,000gns Perth supremo, Mowbraypark Orlando. Secured by JT Davies, Llangedwyn, Oswestry, and bred and exhibited by Arwel Owen, Foel , Welshpool, 24 hours earlier Hilton was awarded the senior and overall male championship by judge, Graham Robinson who described him as an ‘exemplary modern British Charolais’. “Hilton was very correct, he had length, a good top line and excellent locomotion. He caught my eye as soon as he came in the ring, he followed all the way through and had the edge in the final line up,” he said. 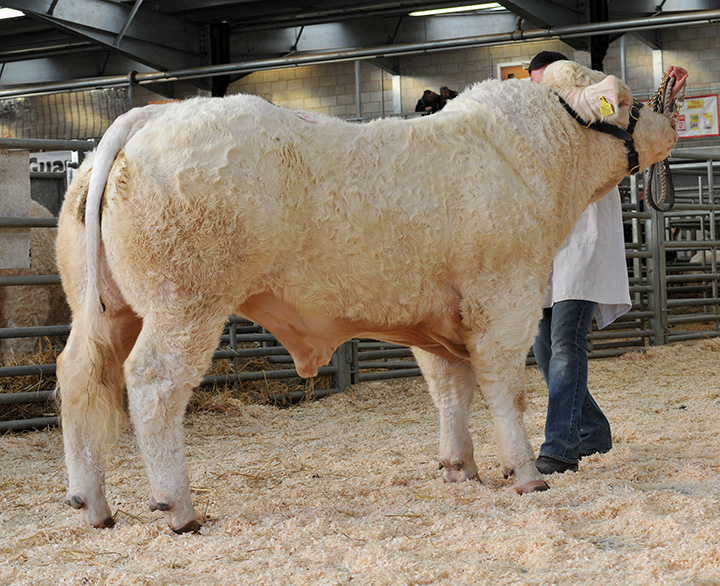 Towards the end of the day, Arwel Owen secured another 6,000gns call this time for Trefaldwyn Hublot TI +60, SRI +57, a 17 month old Blelack Digger son and out of a homebred dam. The buyer was R Williams, Llangwnnadl, Pwellhi. 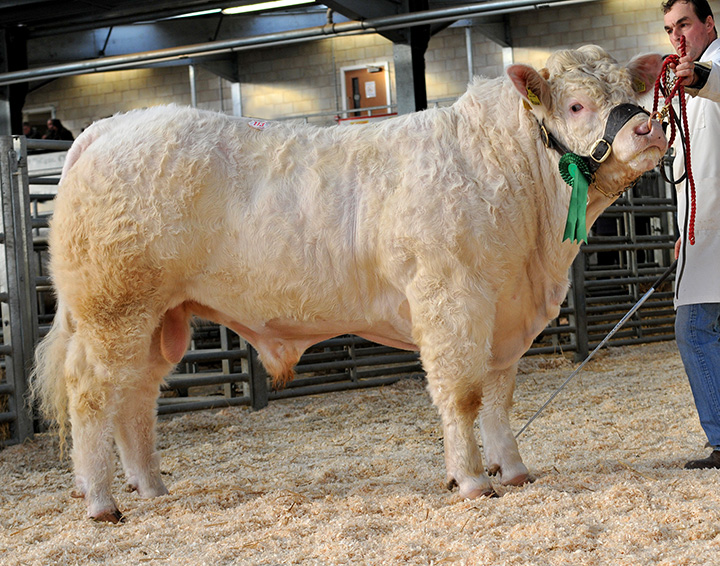 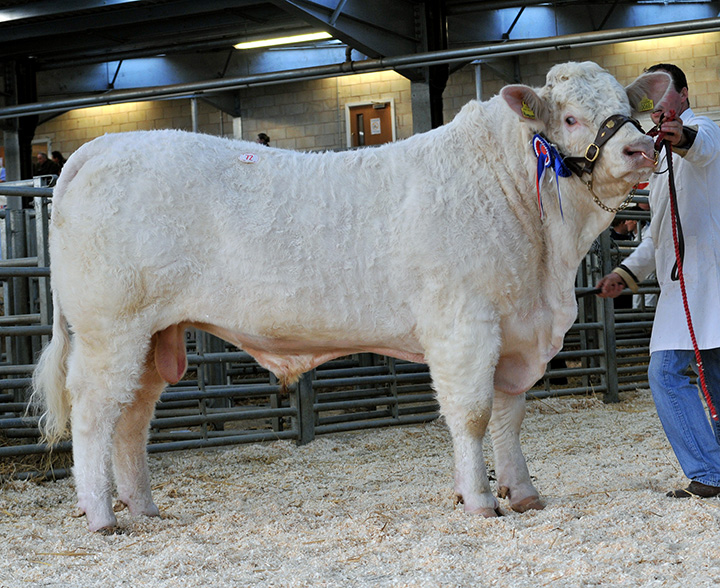 Jarka Robinson, Tenbury Wells sold her highest entry at 5,000gns to GH Williams and Son, Penegoes, Machynlleth. Her 17 month old Cliftonpark Headboy was by the 10,000gns Thrunton Bravado and out of a homebred dam going back to Moyness Topnotch.

Next at 4,000gns was the two year old Maerdy Grandgirl, a Blelack Digger daughter from Esmor Evans to B Walters, Dryslwyn, Carmarthen. 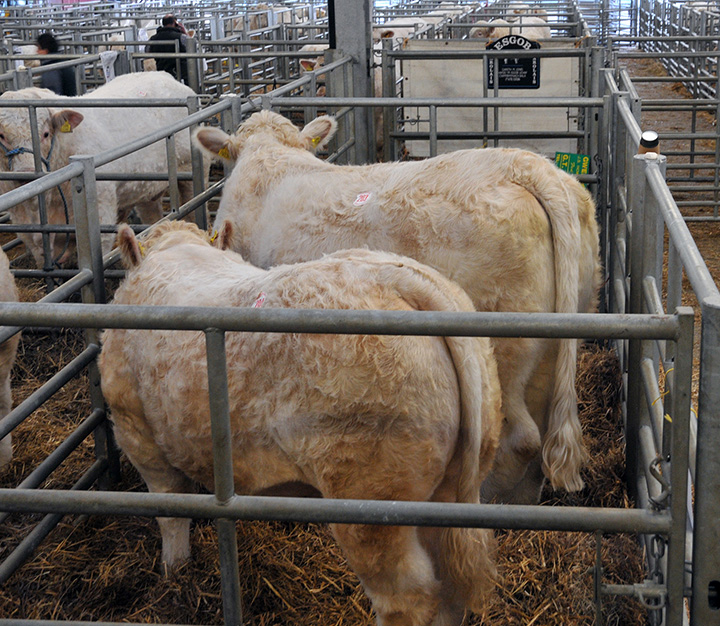 Trefonnen Fergie and her bull calf Trefonnen Ivanhoe at 7,400gns 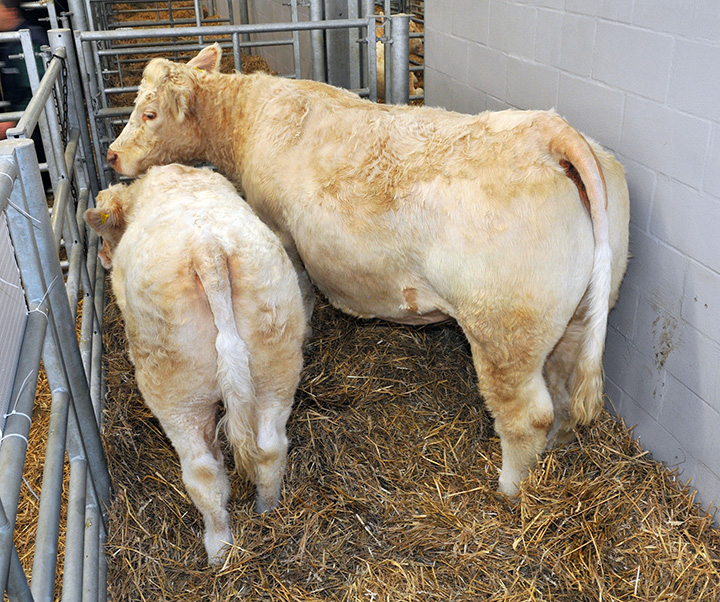 Trefonnen Evasion with her heifer calf Trefonnen Ivory at 6,000gns

Next at 6,000gns was Trefonnen Evasion TI +46, SRI +35, a four year old by Doonally New and out of a Dynod bred dam by Coolnaslee Monarch. She was offered with Trefonnen Ivory, her four month old bull by the 30,000gns Balmyle Bollinger. The pair sold to Kevin Thomas, Capel Iwan, Llanstephan. 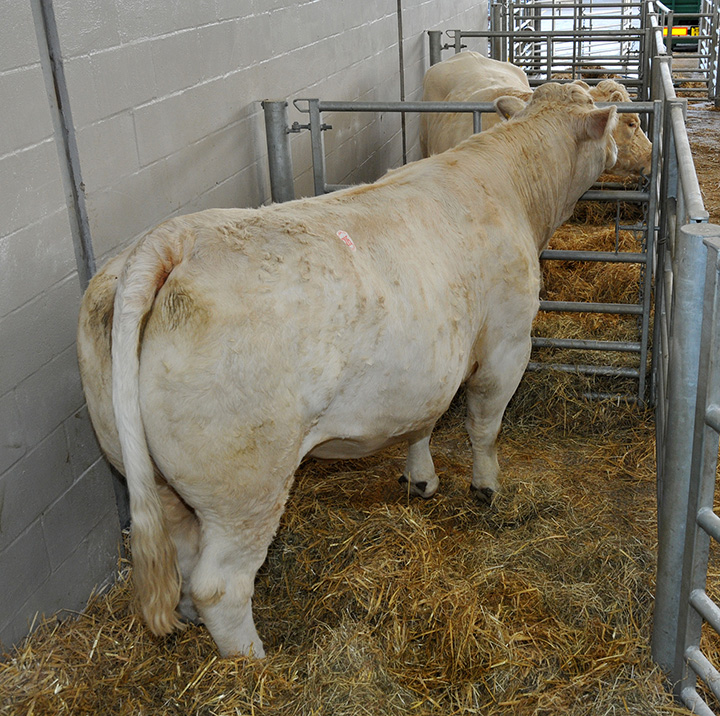 Three lots were each bid to 5,000gns. First was Trefonnen Veronica TI +39, SRI +38, a seven year old by Doonally Nicefor, out of a homebred dam by Moyness Maharajah and sold in calf to Blelack Digger. The buyer was Neil Barclay, Harestone, Crathes, Banchory.

The final 5,000gns call was made by B Walters, Dryslwyn, Carmarthen for Trefonnen Galaxy TI +31, SRI +29, a Thrunton Voldemort daughter and sold in calf to Blelack Digger.

Leading Griff Morris’s draft at 4,000gns was Cargriff Glitzy TI +66, SRI +60, a two year old Blelack Digger daughter and out of a homebred dam by Mowbraypark Paramount. She went over the water with John McGrath, Drumore, Tyrone.

Next at 3,000gns was cow and calf pair Cargriff Flower TI +25, SRI +25, a three year old Goldies Champion daughter going back to Paramount, and her seven month old heifer, Cargriff Iris, by Digger. They sold to HG Evans, Gawsworth, Macclesfield.

Newroddige Caprice with her heifer calf Newroddige Iceberg at 5,400gns

The draft from Danny Wyllie and Pete Mallaber’s Newroddige Charolais herd was led at 5,400gns by a cow and calf pair. Newroddige Caprice TI +28, SRI +24, a six year old by the homebred Newroddige Accentor and out of a Maerdy bred cow was offered with Newroddige Iceberg, her five month old bull calf by Gretnahouse Archangel. The buyer was RA Elias.

A bid of 3,400gns secured a cow and calf pair for MIE Hughes, Caergybi, Ynys Mon. The eight year old Newroddige Athene TI +31, SRI +19 was by Simpsons Gregg and out of an Alwent bred dam, whilst her five month old bull calf, Newroddige Ivanhoe was by the 30,000gns Balmyle Bollinger. 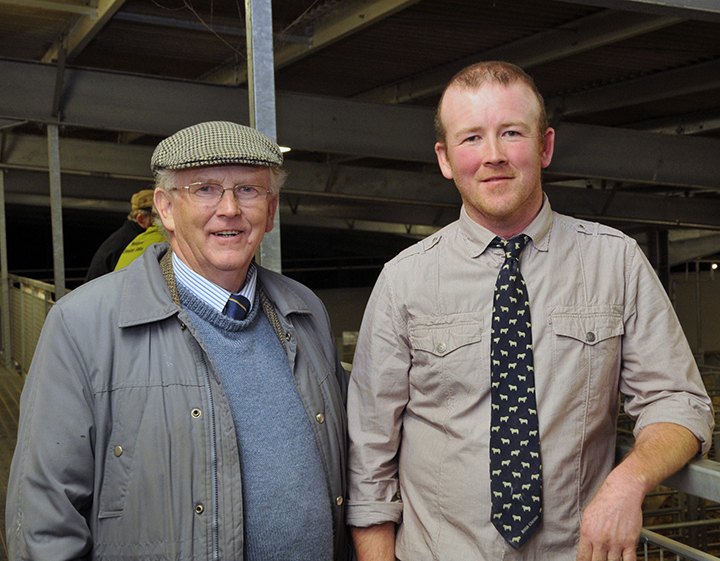 Prices peaked at 5,000gns for the Howells family, John, Anne, Peter and Helen when they reduced a portion of their Gwenog and Pedr herds. Their sale leader was Gwenog Ellann TI +33, SRI +33, a four year old Blelack Tycoon daughter and out of a homebred dam by Derryharney Outstanding. She was offered with her Thrunton Classic sired five month old calf, Gwenog Ilena. The buyer was RA Elias. 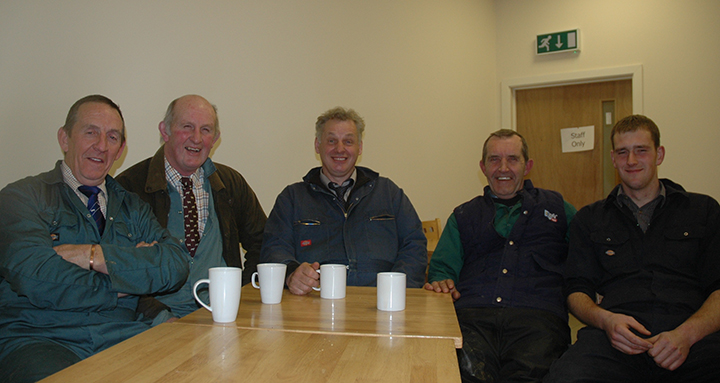 The Newroddige tram take a break before selling their cattle