The British Charolais Cattle Society is proud to offer 24-hour internet access to its pedigree, performance and membership database.

Animal Enquiries
Search for animals by name (or part of name) , by Registration Number, or look for animals using a variety of search criteria (eg. Published in Sire Summary, Breeder in Northern Ireland etc.)

EBV Enquiries
Select for animals using a variety of search criteria and various EBV traits. Sort results by any EBV.

Member Log-On
Use your Charolais Membership Number to access your BREEDPLAN Report Files. 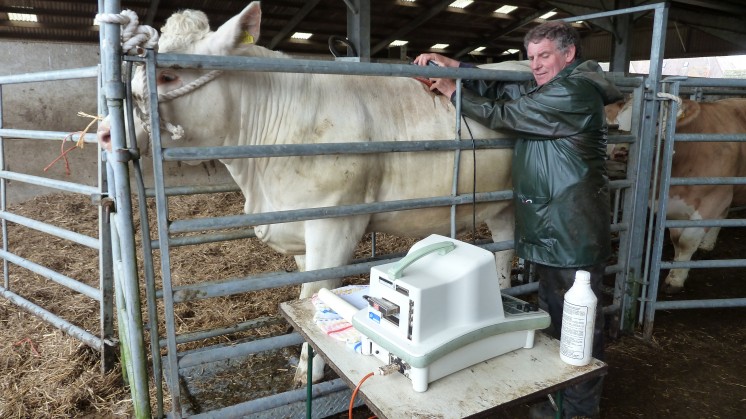 ESTIMATED BREEDING VALES (EBVs)
The EBV is the best estimate of an animals’s genetic merit for that trait.

ACCURACY
An accuracy value (Acc) is presented with every EBV and gives an indication of the amount of information that has been used in the calculation of that EBV. The higher the accuracy the lower the likelihood of change in the animal’s EBV as more information is analysed for that animal or its relatives.

DIR: Direct calving ease indicates how this animal influences the birth of its progeny. Using a bull in the Top 1% for CE direct (+15.8) is predicted to result in approximately 15% fewer assisted calvings in 2 year old heifers compared with usinga bull in the bottom 1% (-14.2). This range is predicted to be smaller in cows. Remember that the dam’s genetics and management are significant factors influencing calving ease in any mating.

BWT: Birth Weight EBV (KG) is based on the measured birth weight of animals, adjusted for dam age. The lower the value the lighter the calf at birth and the lower the likelihood of a difficult birth. This is particularly important when selecting sires for use over heifers.

SS: Scrotal Size EBV(cm) is an indicator of male fertility in regards to semen quality and quantity. Higher (positive) EBVs indicate higher fertility. There is also a small negative correlation with age of puberty in female progeny.

200: 200-Day Growth EBV (kg) is calculated from the weight of animals taken between 80 and 300 days of age. Values are adjusted to 200 days and for dam age. This EBV is the best single estimate of an animals genetic merit for growth to early ages.

400: 400-Day Weight (kg) is calculated from the weight of progeny taken between 301 and 500 days of age, adjusted to 400 days and for dame age. This EBV is the best single estimate of an animal’s genetic merit for yearling weight.

600: 600-Day Weight EBV (kg) is calculated from the weight of progeny taken between 501 and 900 days of age, adjusted to 600 days and for dam age. This EBV is the best single estimate of an animals genetic merit for growth beyond yearling age.

MWT: Mature Cow Weight EBV (kg) is an estimate of the genetic difference in cow weight at 5 years of age. Moderate or larger EBVs are generally more favourable.

IMF%: Intra-muscular Fat Percent EBV (%) is an estimate of the genetic difference in the percentage of intra-muscular fat at the 12/13th rib site in a 300kg carcase. Depending on market targets, larger more positive values are generally more favourable.

TERMINAL INDEX
The BCCS Terminal Index is aimed at a commercial herd using Charoalis bulls over large framed, mixed breed cows to breed steers and heifers to finish at 18 months of age. All progeny are destined for slaughter and no replacement females are selected from within the herd. There is some emphasis on calving ease while finishing steers at around 680kg live weight (375kg carcase weight) using a pasture based production system supplemented with extra rations during the finishing phase.

Use this index in a commercial herd to produce progeny for slaughter. The index has moderate emphasis on easier calving (ie getting a live calf with minimal human interface) while producing calves that will then grow quickly to market specifications at around 18 months of age. The index is focused on slaughter animals and does not account for maternal traits and is therefore not suited to breeding replacement females.

If you are using smaller framed cows or heifers in your herd, then you should also put extra emphasis on a higher calving ease direct EBV when selecting a sire using this index.

SELF REPLACING INDEX
The BCCS Self Replacing Index is aimed at a Charolais herd breeding steers to finish at 16 months of age. Replacement females are selected from within the herd. There is some emphasis on calving ease and maternal traits while finishing steers for slaughter at around 680 kg live weight (375kg carcase weight) using a pasture based production system.

This Self Replacing index is also suitable to using Charolais sires over mixed breed cows where replacement females are sourced from within the herd. There may be some hybrid vigour expressed in the progeny depending on the breed type of the cows used. Therefore you should consider placing extra emphasis on the Calving Ease EBVs (more positive) of the sire to allow for possible heavier birth weights of his calves due to hybrid vigour.

Use this index in both commerical and pedigree herds where you are balancing the requirements of selecting females while also producing animals for slaughter.

Charolais EBV ratios have been incorporated with the Estimated Breeding VAlues (EBV) to assist breeders in making their selection decisions when purchasing Charolais cattle. The Charolais EBV ratio for each trait shows that animal’s breeding value for that trait in relation to the current published breed average.